‘Every moment that Rabbi Stern’s tenure is not extended is an insult to the honor of the Torah and honor of rabbis’ said New Right MK Matan Kahana. 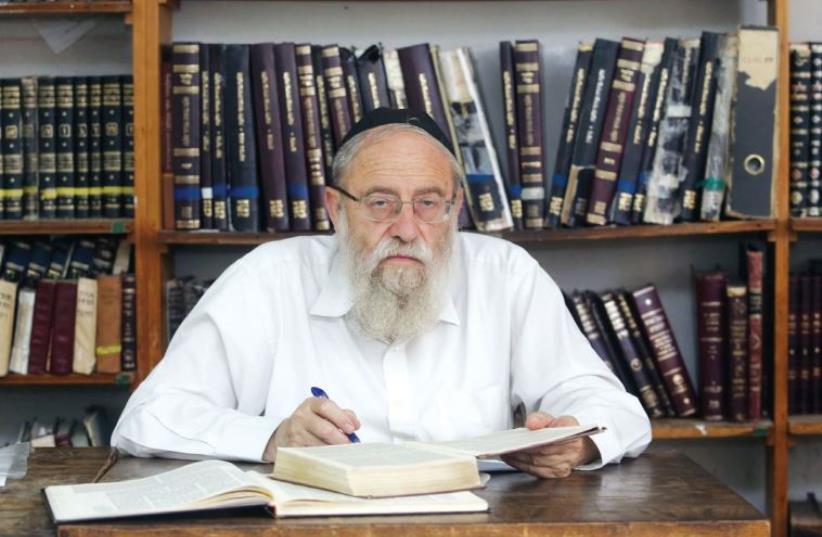 Jerusalem Chief Rabbi Aryeh Stern
(photo credit: MARC ISRAEL SELLEM/THE JERUSALEM POST)
Advertisement
An expected extension to the tenure of Ashkenazi Chief Rabbi of Jerusalem Rabbi Aryeh Stern has been delayed by several weeks, leading two cabinet ministers and two MKs to appeal to Religious Services Minister Yitzhak Vaknin to expedite his approval of the extension. Stern, one of the most eminent and respected rabbis in the religious-Zionist community, turned 75 earlier this month, and according to ministry regulations is required to retire from his position.Since there is currently no functioning government and no way to replace him Stern has requested an extension to his tenure for six months after the establishment of a new government. Several weeks ago it appeared that the extension would be granted quickly, with the deputy attorney general and then the legal adviser to the Religious Services Ministry writing that the request was reasonable and justifiable. It appeared that Religious Services Minister Yitzhak Vaknin was preparing to sign off on the extension, but he has now delayed signing for the past two weeks.Vaknin himself has said that there are two issues which have caused the delay. One is that the ministry is reviewing the claims of various private lawyers who disagree with the position of the deputy attorney general. The minister has also stated that he does not want the change in regulations to pertain specifically to Stern but to other rabbis in the same situation. The ministry has said that the municipal chief rabbi of Karmiel is in a similar situation to Stern, along with municipal chief rabbis in Hadera and Ashdod.A spokesman for Stern said that there was no need to hold up approving Stern’s extension in order to approve extensions for other rabbis. Two well placed sources who wish to remain anonymous accused Sephardic Chief Rabbi of Jerusalem Rabbi Shlomo Amar of seeking to block the extension, but a spokesman for Amar categorically denied the allegation. He added that since Amar is 71 he would also benefit from the precedent of Stern’s extension. The Jerusalem Post understands however that there are moves afoot to increase the mandatory age of retirement to 80, a change which Stern himself would like to eventually take advantage of. Because of the ongoing delay in extending Stern’s tenure, Education Minister Rabbi Rafi Peretz of Bayit Yehudi and Transportation Minister Betzalel Smotrich of National Union have both personally spoken with Vaknin to request he approve the extension. MK Moti Yogev of Bayit Yehudi and MK Matan Kahana of New Right have also appealed to the minister to take the necessary steps to sign the extension. Stern was elected as Ashkenazi chief rabbi of Jerusalem after a fierce election campaign in which religious-Zionist politicians worked hard to ensure that at least one of the two chief rabbis of Jerusalem was religious-Zionist, as opposed to the two national chief rabbis both of whom are ultra-Orthodox. Kahana in a letter to Vaknin on Thursday said that the delay in approving the extension was an insult to Stern. “Rabbi Stern was elected as a representative of the religious-Zionist community but serves as the chief rabbi of all of Jerusalem’s population in all its diversity,” wrote Kahana. “Every moment that Rabbi Stern’s tenure is not extended is an insult to the honor of the Torah, to the honor of the public, and to the honor of its rabbis.”