Rabbi Yehoshua Fass’ affirmation for a congregant was rejected in 2016 along with those of 159 other Diaspora rabbis. 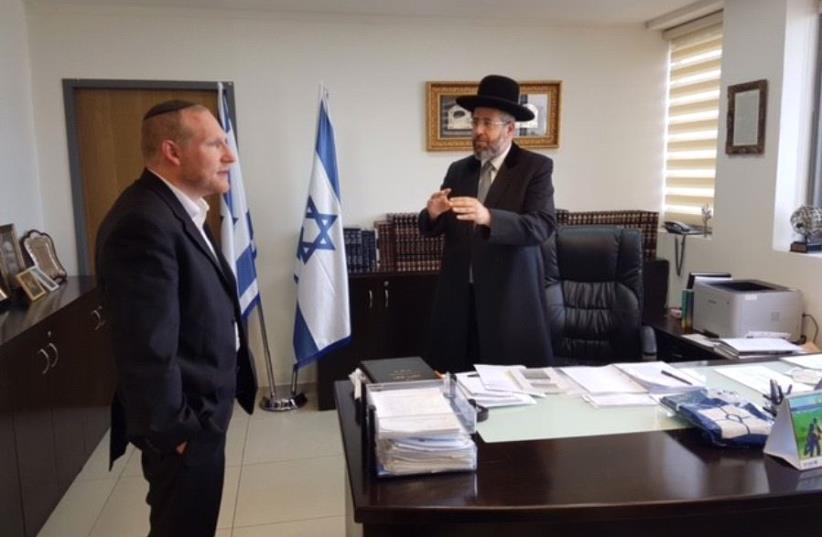 Rabbi Yehoshua Fass (left) in his meeting with Chief Rabbi David Lau
(photo credit: NEFESH B'NEFESH)
Advertisement
Chief Rabbi David Lau has expressed his regret for the rejection by the Chief Rabbinate of a letter of affirmation of Jewish status sent by Nefesh B’Nefesh co-founder Rabbi Yehoshua Fass.Although Lau did not actually apologize for the incident, he did reassure Fass that he is held in good standing with the Chief Rabbinate and that his credentials were not in question.Lau met with Fass on Tuesday to discuss the matter, and sought to assure him that the latter was well-respected and accepted by the Israeli religious establishment. A letter subsequently sent to Fass by Lau’s office stated that the chief rabbi was “saddened that this document impugned your good name,” said that it was “in no way, God forbid, a rejection of you,” and that Lau had instructed “all those involved” to act accordingly. On Sunday, the list of 160 rabbis whose affirmations of Jewish status for previous congregants seeking to register for marriage in Israel had been rejected by the Chief Rabbinate in 2016. Critics have denounced the Chief Rabbinate for these rejections, saying that they disparage Diaspora Jewry and its rabbinic leadership, cause suffering for the people involved, and seek to unnecessarily impose the Chief Rabbinate’s highly conservative standards on legitimate and independent Diaspora communities. In his letter to Fass, Lau also claimed, not for the first time this week, that the list did not imply an outright rejection of the credentials of these rabbis, but rather indicated that there had been problems with the specific cases of the individuals for whom the rabbis had written their letter of Jewish status affirmation.“The intent was not to reject these Rabbis, God forbid, but rather that certain documents that reached him [the director-general of the Chief Rabbinate Moshe Dagan] had questions surrounding them and uncertainties regarding them. Some were suspected of being forged, and others due to other elements found in them,” reads the letter to Fass. Rabbi Seth Farber, director of the ITIM organization which obtained the list, rejected this claim however, asserting that the reason for the rejections was that the Chief Rabbinate simply does not trust these rabbis.Farber contended that if the problem was the validity of documents provided by the individual in question and the letter of the rabbi, then the Chief Rabbinate’s officials should have directly contacted those rabbis in order to better understand the circumstances of the case. “The only basis for rejection was that they don’t trust these rabbis,” said Farber. “If they found dates which didn’t match, or problems with witnesses then why didn’t they speak to the rabbis themselves?”He also pointed out that the list demonstrated again that the Chief Rabbinate does not use  transparent and impartial guidelines when making such decisions.  In addition to the letter sent to Fass, a separate letter was sent by Dagan to Rabbi Reuven Tradburks, the representative in Israel of the Rabbinical Council of America, a large Orthodox association of rabbis in the US. Misidentifying Tradburks as president of the RCA, Dagan explained the list of 160 rabbis in the same way as Lau did, claiming that it was not "a list of rabbis who are not recognized or authorized,” but rather “a list of rabbis who received a response of ‘not recognized’ for some reason or other by the Division of Personal Status and Conversion.” Dagan said he would explain further in a meeting next week with Tradburks and RCA Executive Vice President Rabbi Mark Dratch.Also on the list of 160 rabbis were many Reform and Conservative leaders. The Rabbinical Assembly, the international association of Conservative rabbis, issued a statement on Tuesday saying that it “proudly stands by” its rabbis on the list. “This ‘blacklist’ is far less a reflection on the esteemed rabbis it names, inasmuch as it further diminishes the stature of the Chief Rabbinate in its continued actions that sew division and discord among Jews world-wide, and in particular, between Israel and the diaspora,” the Rabbinical Assembly declared.The moderate national-religious lobbying group Ne’emanei Torah Va’Avodah also hit out at the Chief Rabbinate for in effect rejecting the credentials of Diaspora rabbis to authenticate the Jewishness of their congregants. “Not one of those rabbis was contacted by the Chief Rabbinate and was unable to defend himself against being rejected,” said NTA in a statement to the press. “It appears that the Chief Rabbinate puts rabbis on its blacklist according to information received from people with an agenda and informants. The inclusion on this list of leading Orthodox rabbis from the moderate wing of Orthodoxy should outrage anyone with a conscience, and we call on religious-Zionist rabbis to express their objection when the Chief Rabbinate records another miserable chapter of its history.”