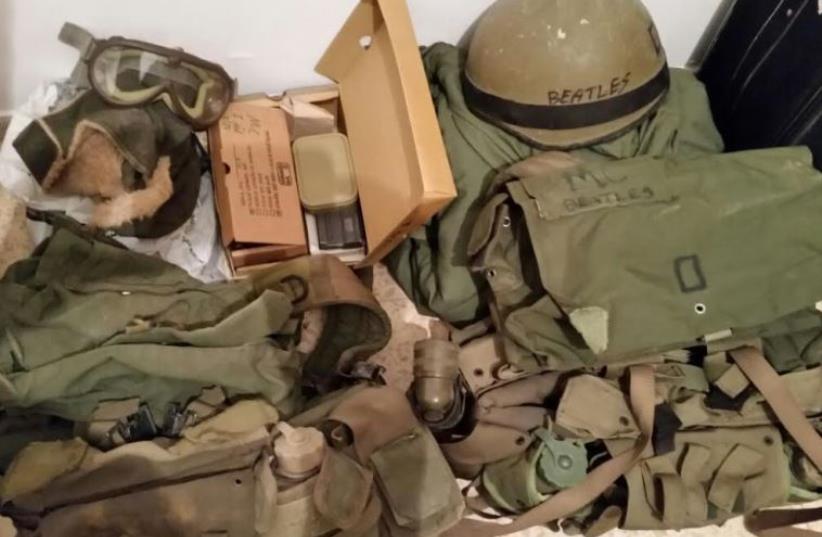 IDF gear.
(photo credit: IDF SPOKESMAN’S UNIT)
Advertisement
A weapons amnesty program launched by the IDF last month has seen civilians deposit an arsenal of arms at IDF bases around the country, an army officer in charge of the collection told The Jerusalem Post on Tuesday.Civilians responding to the IDF’s call to hand over military and other types of equipment have, over the past three weeks, turned over more than 160 weapons, and hundreds of thousands of rounds of ammunition, according to Col. Meirav Brikman, commander of the IDF’s Equipment Center, a part of the Technology and Logistics Branch.“We received hundreds of grenades, explosive bricks, assault rifles and hand guns.A missile launcher from the 1980s, and land mines,” Brikman said.Some of the returned items were very old, having originated from past wars, she said.“Sometimes, we were surprised by what we saw. We do not ask people why they had them, in line with the terms of our campaign,” she added.Older weaponry included Kalashnikov rifles, whose origins are unknown; weapons from a War of Independence stash found on a kibbutz; and even a 19th century British rifle that has been given to a historian for analysis.Mortar shells also were part of the war gear received by the IDF, and non-combat equipment, such as vests and boots, also piled up at the collection points.“Many of these items form active explosive risks. They could fall into criminal or terrorist hands if left in homes,” Brikman warned. “We are currently examining the option of sending police cars, in conjunction with local authorities, to pick up weapons [if requested to by civilians].”Last month, Brig.-Gen.Yoram Azulai, head of the IDF Technological and Logistics Directorate, announced the start of the drive, calling on civilians to return all military equipment, from firearms and ammunition to flares and stun grenades.Collection points include IDF bases and police stations and are listed on the website www.mahzirim.co.il or can be identified on the *2972 hotline. The program runs until April 15.The last such drive, which took place in 2008, saw some NIS 7 million worth of equipment returned, Azulai said in announcing the drive, promising that anyone can return equipment anonymously during the program but that after “it is over, we will increase enforcement.”One IDF reservist, who is in possession of non-combat gear from his reserves duty, said that although he had heard of the campaign, he is waiting to return the equipment by sending them back with friends who will do their reserve duty.The reservist, who has an army snowsuit and other items of army clothing, is representative of many reserve soldiers who take such items home after completing their service. He said the “equipment is sitting in a bag at home. My wife has been telling me to return it. I would have returned it anyway, irrespective of the campaign. I’m waiting for someone to go to reserves, to take it with them.”A second reservist, who had been keeping a double magazine clip for an M-16 rifle, filled with dozens of ammunition rounds, took advantage of the campaign to drop off the gear at the Sde Dov collection point.“I took this home from my conscripted service, on purpose, because I wanted a double, not a single clip for my reserves. When you shoot the gun and run out of bullets, you need to put in another magazine. If you don’t have a double clip, you have to look in your pouch for the replacement. The double allows you to immediately replace the first clip,” the reservist said.“It has been sitting in my cupboard for 20 years. I did not know how I would ever give it back.When I saw the ad on Facebook, I thought, this is my opportunity.The clips were in a big duffle bag, taking up space, I knew I would never use them again. I also had uniforms from my reserves,” he said.The process of returning the gear was smooth and efficient, and “no questions were asked,” the reservist said, noting that two soldiers collected the items.“They did not ask for my name or anything. It could not have been more efficient. This is what the army does best. I’m never going to have an M-16. You don’t want this stuff in the house. I was happy to get rid of it,” he said.Shula Braun from Ma’aleh Adumim returned a sack full of winter coats and other clothing to the local police station that her three children had accumulated during their service. But in the middle of the sack she inserted a bag of about 50 bullets that been sitting on a shelf for years.“Even though they said there would be no questions asked, I didn’t really want to have to explain why we had a bag of bullets in the house,” said Braun.“Sure enough, when I dropped off the equipment, a police officer asked me if there was any ammunition in the sack. I couldn’t lie, but I told him, ‘I thought there were no questions asked.’”