Automatic custody for mothers would only be for children under age two. 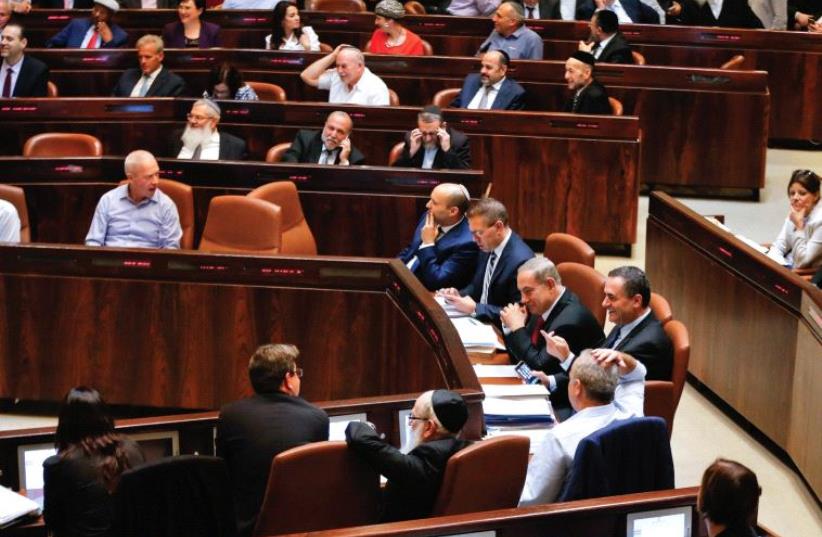 SHOW US the money. Lawmakers attend a preliminary vote on a bill at the Knesset
(photo credit: REUTERS)
Advertisement
The Knesset approved legislation lowering the age of automatic custody of children for divorced mothers in a preliminary vote on Wednesday.Currently, mothers receive custody of children under the age of six in case of a divorce, barring special circumstances. Under the new bill, that age would be lowered to two.The initiative has been a point of dispute within the coalition for a year and a half. MK Yoav Kisch picked up the bill where fellow Likud member MK Gila Gamliel left off when she became social equality minister. The two proposed that the automatic custody rule be eliminated, and that judges decide who gets custody according to the good of the child.However, when Kisch brought the bill to a vote in 2015, several women in the coalition decided they could not support it, saying that it turns children into a bargaining chip and weakens women’s standing in divorce proceedings. Then, the legislation did not pass a preliminary reading, and since then, has come up again intermittently, with the disputes flaring up again.Meanwhile, divorced fathers organized a pressure group in support of canceling the custody law, with hundreds joining the Likud.MK Shuli Moalem-Refaeli (Bayit Yehudi), a prominent coalition opponent of the bill, received death threats from divorced fathers.Kisch finally agreed to support a compromise, leading to Wednesday’s vote, after realizing he could not get coalition support for a full cancellation.“As in many countries, here, too, the total cancel of automatic custody will happen in two steps, and I will work to reach that goal,” he said.Kisch said lowering the age cutoff is “significant and many families will avoid the damage of the automatic custody law.”Gamliel said children have the right to be raised by both of their parents, and that canceling automatic custody will help divorced parents and their children.“I hope that we will be able to promote the bill canceling gender- based automatic custody, and thus act to change the social idea that mothers take care of children while fathers make the money,” she said.Meretz chairwoman Zehava Gal- On said the bill’s advancement is a victory for “a group of violent men,” accusing the divorced fathers’ group of encouraging violence against women. She called the bill “misogynistic.”“Lowering the automatic custody age is the surest way to trample women in Israel,” she said. “Most fathers want and need to be equally involved in raising their children, but this cannot be allowed via one-sided legislation. These are men who think that what’s good for children is what’s bad for the mother. Fathers who really want equality act accordingly from the moment children are born and don’t wait until child support has to be paid.”MK Aida Touma-Sliman (Joint List), chairwoman of the Knesset Committee for the Advancement of Women and Gender Equality, came out against the measure saying: “We’re not against gender equality. The opposite is true. Our demand is to change the gender-based division of jobs and have men take part in household chores... There needs to be equality in all areas of life... The order of things in society needs to be changed in general in order to demand total equality.“This is a political compromise within the coalition, and children are not what power struggles in the coalition should be about.Who decided two is the right age? Where is the good of the child in this?” Touma-Sliman wondered.