A German dancer with an unconventional physique, Raimund Hoghe explores the notions of beauty as part of the Diver Festival in Tel Aviv. 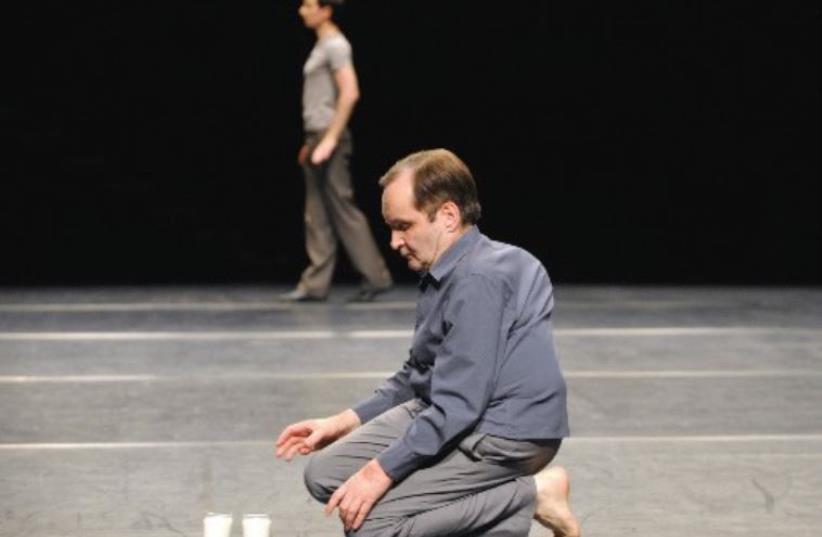 Raimund Hoghe (front) and longtime collaborator Emmanuel Eggermont perform ‘L’Apres Midi’
(photo credit: ROSA FRANK)
Advertisement
In the dance community, Raimund Hoghe is an outlier for many reasons. For one, his introduction to and experience with dance has granted him a unique vantage point. For another, his physical form does not fit the classic standards of a dancer.A petite man with a hunched back, Hoghe cannot execute the leaps and turns one expects from a professional dancer. “When I’m on stage, many people might call me ugly. I represent the other side, the one that is not beautiful, not perfect and not ideal,” he said over a Skype call.Hoghe is currently visiting Israel for the first time as a guest of the annual Diver Festival. Tonight, thanks to support from the Goethe Institute Israel and Moves Without Borders, he will host the opening event of the festival entitled Writing with Words and Bodies.The event, which will take place at the Suzanne Dellal Center, will consist of a screening of Sacre – The Rite of Spring, followed by a lecture. On Wednesday and Thursday, he will present the duet L’Apres Midi.Hoghe began his professional career as a writer, authoring portraits of a variety of individuals for German publications. He spent years meeting with people, famous and not, and listening, in order to present the public with a window into their worlds.“I wrote about ordinary people, artists, people who live their life. I wrote a lot of articles about people with AIDS and about people in old-age homes here in Dusseldorf.There were pop singers and fine artists. It could be a cleaning woman or a retired man but they each had a quality I could learn from. I was interested in the strength of people to live their life to do what they want to do,” explained Hoghe.It was with his writer’s hat on that Hoghe met Pina Bausch, whom he went on to collaborate with for a decade. As Bausch’s dramaturge, Hoghe began seeing the similarity between the work of the journalist and that of the choreographer.In 1994, Hoghe presented his first work, Meinwarts, a solo about the German Jewish tenor Joseph Schmidt.“He was exiled by Nazis. I made a solo about his life and work. After that, I did a solo about Maria Callas and the last one was about Judy Garland. They are three very different characters, each with a biography that I wanted to share with the audience. I think these stories give people strength,” he said.With several solos under his belt, Hoghe began creating works for other performers.“Making a solo for a dancer is very much like writing their portrait. My approach in writing is very similar to the studio,” Hoghe explained. “I don’t come with a list of what I want to do or ask. I don’t know what music I will play in rehearsal. I’m open in the moment and I go with the moment. I listen and maybe from this, something else is coming up.”Hoghe and longtime collaborator Emmanuel Eggermont perform L’Apres Midi.“We’ve worked together for 10 years. I met Emmanuel in a dance school in Angers, I was there for a workshop.He was the youngest and the strongest in the class. You connect with some people very well and with others it’s very difficult. Emmanuel is a big inspiration for me.He was the starting point of this work. I wanted to do something for him and with him. He has enormous qualities as dancer. He is precise, emotional and clear.”L’Apres Midi is danced to music by Claude Debussy as well as Gustav Mahler.“When I told Emmanuel that I wanted to use the songs of Gustav Mahler, he said ‘strange, I was just listening to them,’” he said. “The music is a very big inspiration in this piece. Even if the audience doesn’t know it, they can connect to it. With dance I can express things that I cannot express with words. I want to [share] with an audience the beauty of music and the beauty of the dancers. I talk a lot in my work about beauty. I think we need beauty today. Part of it, for me, is in the music.”The notion of beauty is at the heart of all of Hoghe’s work, particularly L’Apres Midi. The juxtaposition of Hoghe and Eggermont’s figures illuminates the differences between them.“When I go on stage I am supporting Emmanuel.My body is not called beautiful and his is. I know how many disabled people died in camps, killed by the Nazis. I have this relation, this fight for diversity for people that should live with different bodies, religions and sexual orientation. I feel that we should fight. This I can share with an audience and the beauty of the music and dancers.”Raimund Hoghe will present Writing with Words and Bodies tonight at 6:30 p.m. at the Suzanne Dellal Center.

L’Apres Midi will be performed on September 2 and 3 at 9 p.m. at the Suzanne Dellal Center. For more information, visit www.thediverfestival.co.il.
Advertisement
Subscribe for our daily newsletter