A grand time at Rio Grande

The Tel Aviv steakhouse is a haven for meat lovers. 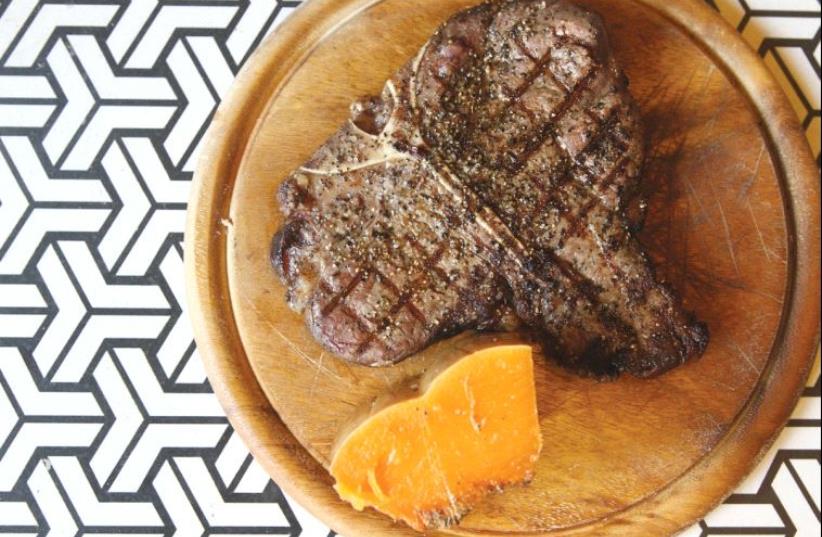 Rio Grande restaurant
(photo credit: PR)
Advertisement
For most of us carnivores, there comes a time when we are really in the mood for meat.Not the casual roast beef sandwich but a good cut of beef grilled to perfection. Rio Grande steakhouse, which opened just over a year ago on Tel Aviv’s Herzl Street, provides everything that the real meat lover seeks.Upon entering, one is immediately struck by the warm, welcoming atmosphere. A bar functions as the centerpiece of the restaurant, and customers can sit there for a quick drink or at one of the surrounding tables We had a chance to sample a wide array of dishes from the enticing menu. First to arrive was the tomato salad with bushe cheese (NIS 44). The salad was pure pleasure, as not only were there different types of tomatoes, but some were charred and some were refreshingly cold, giving the dish a unique twist in texture.This was followed by grilled sirloin slices in a root salad (NIS 48). The steak was a perfect balance between rare/medium rare, and the root salad was fresh and flavorful.Next up was grilled calamari and mushrooms (NIS 54). The calamari were perfectly grilled and very tender (no rubber here). It’s very easy to overcook calamari, and tough calamari is a crime. This dish was fantastic.After some tasty cocktails, we were served the chicken liver pate (NIS 42). The mound of smooth, rich chicken liver was about as big as a scoop of ice cream. There was a generous amount of berry confit, and the bread slices were toasted to a tee.The stand-out starter for me was the bresaola (NIS 54) – air-dried, salted beef that has been aged two or three months until it becomes hard and turns a dark red, almost purple color – served with goat cheese paste, garlic and bone marrow. Accompanied by toasted bread, the presentation was outstanding. As we took delicate bites of the perfectly cured beef mixed with everything, I watched my companion’s eyes light up as she realized how delicious bresaole could be.Ultimately, the main courses are what the restaurant will be known for. Porterhouse, prime rib, entrecote, sirloin, rump and T-bone steak are offered, in addition to hamburgers, grilled chicken and smoked spare ribs. All main dishes come with a side of baked potato, smoked pumpkin or stir-fried mushrooms. There is also a choice of sauces, which include mustard and brandy, chimichurri and black pepper and cream.For mains, we were presented with the New York sirloin steak (NIS 140).The sirloin was wonderfully juicy and flavorful. I usually eat red meat with a sauce, but I didn’t need it. I am still salivating thinking about that meat.Not to be outdone, the next course we had was the 500 gr. prime rib steak (NIS 160). It was a very generous piece of meat, and the seasoning was just right. Delicious to the very last bite.Last, we were presented with the smoked spare ribs (NIS 145), which is considered one of Rio Grande’s signature dishes. All I can say is wow!!! The meat was so tender, it fell right off the bone. It had a strong smoky flavor and was charred just enough.The desserts were delightful as well. We shared the knafeh (NIS 40) and the Turkish semolina cake (NIS 42).All in all, it was a superb dining experience. The service was great, the food was excellent, and the ambience was very sophisticated for a traditional steakhouse. I must say we were in a food coma by the time we were done, but it will definitely not be our last time at Rio Grande.The writer was a guest of the restaurant.Rio Grande
Not kosher
4 Herzl Street, Tel Aviv
Tel: (03) 573-7277