An island unto himself 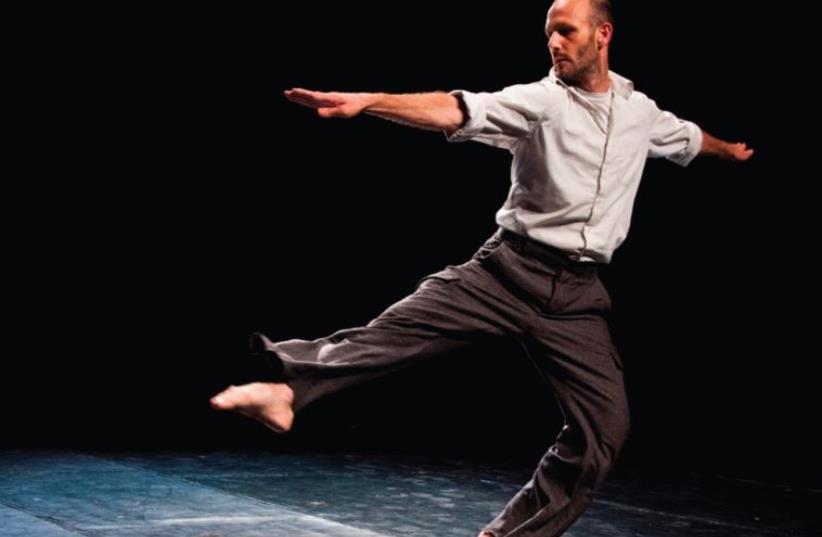 Oren Tishler
(photo credit: EINAT MERAV)
Advertisement
It may seem like a contradiction to celebrate International Women’s Day watching a religious man, one who does not observe women dancing, perform a solo to the national anthem. However, this year, as part of the Zikit Theater’s celebrations of the event, that is exactly what will happen. On Monday evening, Oren Tishler will participate in Ruth Sigalis’s Shira Be’tzibur – Israeli Cabaret.Tishler, 38, has been performing in Sigalis’s show for more than two years. When he began the creative process, the veteran dancer had yet to be married, to become a father of two and to give up watching women on stage. This production, which has been performed for the past few years, has accompanied Tishler through the most meaningful and uproarious time in his life.When choreographer Ruth Sigalis approached Tishler to take part in the new production, he was several years into the process of hazara b’tshuva, one that took him from the haphazard life of a freelance dancer in Tel Aviv to a quiet home in the north of Israel. Prior to strengthening his religious observance, Tishler was one of the most respected male dancers in Israel. He performed with companies such as Vertigo Dance Company and Noa Dar Dance Group. In addition, he initiated several training programs for professional and non-professional dancers, which continue to run to this day.The move toward the spiritual realm happened rather quickly and very powerfully for Tishler. Within just a couple of years of beginning the process, he had left the city, scaled back his performances and devoted himself to pursuing his new passion.This shift, which Tishler underwent with several family members, meant significant changes in his professional and personal life, adjustments that continue to be made.“After my wedding I stopped teaching women, and there are groups of men that I teach,” explains Tishler over the phone. Tishler’s voice is soft and welcoming, his manner peaceful. His sentences are sprinkled with religious references, with a sense of true devotion. He talks about dancing as something holy, sacred, a gift that he has been given and must be treasured. The enjoyment of performance has grown for him in his new life, and he expresses his gratitude and sense of wonderment at finding a balance between his two life practices – Judaism and dance.“There is more humbleness with the body and the clothes now,” he says. “I am dancing from sanctity, and it requires a more intense research that is beyond beauty and the body. I am looking for another reason, a connection to God and to view the world in a deeper way. It’s a search for something greater. I can’t say I always find it, but I try. I feel different.”Being in the studio with Sigalis even two years ago required Tishler to tweak his work habits. As a religious man, he knew that watching Sigalis dance would be improper; however, it would undoubtedly be necessary in a creative process based on movement.“Ruth came more with the idea and took the movement from me. We filmed it and talked about it more with words. I wasn’t watching her dancing; at the most, she raised an arm, moved a leg. But mostly she explained things in words,” says Tishler.In Shira Be’tzibur – Israeli Cabaret, Tishler performs two sections. The first is a solo to an old arrangement of the Israeli national anthem.“It’s very challenging,” says Tishler.“The music is a very clear thing, so there is a strong sense of respect and responsibility in dancing to it. The music, as well as Ruth’s direction, gave me a structure to work with. I needed to learn to live with it. I think we need structures to live with, and I think Israelis are very good with structure,” he says.The second is danced to a song about the Sea of Galilee. Sigalis, like Tishler, is a born northerner. Together, the two found a vehicle to express their love for their home region.“Because I’m from the North and I love the Galilee, it’s a great pleasure to dance that section. I feel less stressed to express something than in the first section, and I really enjoy it,” he says.Although he will not watch the upcoming performances, Tishler has very positive memories of the production.“When we made this work, I was still watching women dance, so I got to see the piece. I think that it’s very moving, very well done. All the elements – the theater, the dance, the music – are all very deliberate,” he says.

‘Shira Be’tzibur – Israeli Cabaret’ will run on March 7 at 7:30 p.m. at the Rishon Lezion Cultural Center. For more information, visit www.zikit.info or call (03) 948-8666.
Advertisement
Subscribe for our daily newsletter