The Eilat Chamber Music Festival will feature over 100 artists from the UK, Holland, Italy, Russia and Israel.

The Eilat Chamber Music Festival is back. Regular patrons of the event will, no doubt, be delighted to make the trip down south this week, to catch some polished classical sounds from here and abroad, with the four-dayer housed at the Dan Hotel February 9 to 12.

After last year’s COVID-related cancellation the organizers and, in particular, founding artistic director Leonid Rozenberg have come back with a quality lineup of over 100 artists from the UK, Holland, Italy and Russia, as well as some of the cream of our own crop.

The repertoire takes in works across a broad range of genres and styles, including by Vivaldi, Haydn, Mozart, Brahms, Grieg, Shostakovich and Ravel.

No doubt, a large number of festivalgoers will be curious to see, and hear, for themselves what Eva Gevorgian has to offer. The 17-year-old pianist from Russia will appear in Eilat on February 11 (5 p.m.), to perform a recital of works by Beethoven, Chopin and Scriabin. Youth notwithstanding, this will be her third appearance at the festival.

The youngster wasted little time embarking on her artistic road, with more than a little encouragement from home. “I started playing piano at five years old,” she notes. “When I was born my mother was studying at Moscow Conservatory as a viola player, so I constantly listened to music at our home. From the time I remember myself I always asked to study music.” 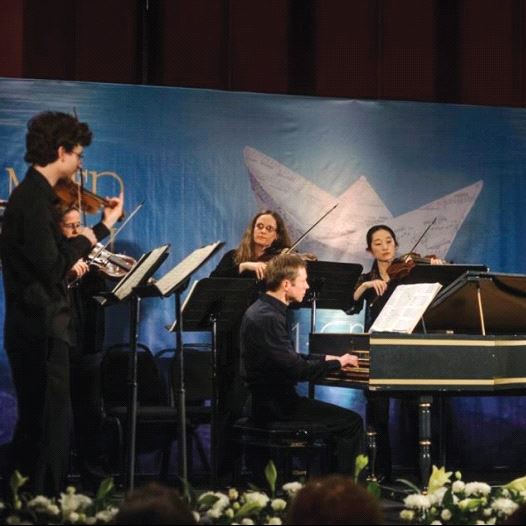 However, things did not start too well. “I dreamed about a little violin and I got it when I was three years old, but the next day I broke it into pieces, as I didn’t like the sound I made. Actually, I just couldn’t play,” she adds with a laugh. A change of tack was in order.

“At five years old my grandmother asked my parents to send me to music school and my regular piano lessons started, firstly, at the nearest school and in one month I entered the Central Music School by the Moscow State Conservatory.”

There have been reams written about the challenges faced by wunderkind, whose precocious gifts are several steps ahead of their level of emotional maturity and who suffer as a result of being overly focused on their field of genius and miss out on the joys of childhood and the crucial benefits of that stage of personal development.

Gevorgian’s parents clearly had a responsible handle on that and she grew up with a well-balanced regimen. “I always practiced a lot,” she says, “but I also find time for other activities. I go to the gym, to the swimming pool and I learn languages. In my childhood, I went to the ballet studio.”

Despite her earlier unhappy encounter with the violin, Gevorgian tried her hand at another instrument and says she reaped ongoing rewards of the experience.

She also immediately began trying her hand at creating her own scores. “I started composing at the same time when I started learning piano, at the age of five,” she recalls. “We even have some old videos where I played and sometimes sang songs. I am five years old in those videos.”

Some of that was inspired by a famous fictional youngster. “I can say in my childhood I composed much more often, and wrote some piano pieces dedicated to Harry Potter.” She adds that she tends to write in a more “contemporary” style of music.

SHE SOON got into the competition scene, and thrived on the social ambiance and, rather than being overwhelmed by the grandeur of the setting, she reveled in the sense of occasion.

“My first international competition, Amadeus, in the Czech Republic was when I was six. I like competing, I like meeting my colleagues around the world, making new acquaintances and playing in beautiful halls in front of outstanding musicians. Also, it is a good chance to play with an orchestra,” she says.

She also appears to have developed a keen sense of what it takes to make the big time. “Competitions help young musicians to be promoted, play with orchestras, expand the repertoire.” Still, even she finds some test her stamina and mettle. “It’s difficult to play in big competitions with five rounds as [the Van] Cliburn [International Piano Competition in Fort Worth, Texas] or [the International] Chopin [Piano Competition in Warsaw]. You have to be in your best shape mentally and physically to go through such marathons.”

The Polish Romantic Era composer features in Gevorgian’s recital later this week. “I have chosen such a program as they are my both favorite composers – Chopin and Scriabin. Chopin Sonata no 2 is one of the most deepest and philosophical pieces. In 24 Preludes by Scriabin you can hear different moods, I like to play the whole cycle.”

She says the third item in the concert should be an emotive and evocative experience for her and, hence, the audience. “Also I will perform Beethoven Sonata no 17. [Beethoven’s secretary and biographer] Anton Schindler asked Beethoven what this piece symbolized for him. Beethoven said: ‘Read The Tempest by Shakespeare.’ There is a lot of passion, drama and fantasy in it.”

It is surprising to find one of such tender years attempting to convey such drama and melancholy and doing such a fine job of it. The teenager says she did her homework, and dug deep, before getting down to the chart.

“It’s true, Sonata no 2 has serious sentiments. I have been playing Chopin from seven years old and I had a long way before playing his sonata. I read his letters, studied his biography, was in Zelazowa Wola, the place he was born, and in Szafarnia, a village where young Chopin spent his summer holidays.

“And of course, I played many of his works – both opuses of études, several waltzes, scherzos, mazurkas, ballads and both concertos. So, step by step, I came to his sonata in which I can hear music from the earth, from heaven and from the afterlife.”

Gevorgian says she is anticipating a quality festival, and catching some of the other artists and ensembles doing their thing.

“The atmosphere of the Eilat Chamber Music Festival is so friendly and relaxing, there are amazing musicians playing in that festival. I tried to visit as many concerts as I could during the festival. I am very happy to come back!”

Still, she wouldn’t mind getting in a longer stay over here. “My dream is to visit Jerusalem and the Dead Sea one day,” she says.

Perhaps some ray-soaking and tasty vittles will help to compensate for now. “I am very looking forward to seeing sunny Eilat and eat falafel!”