Dark and delicious: Strange-hued treat has conquered Instagram in America and is now in the Holy Land. 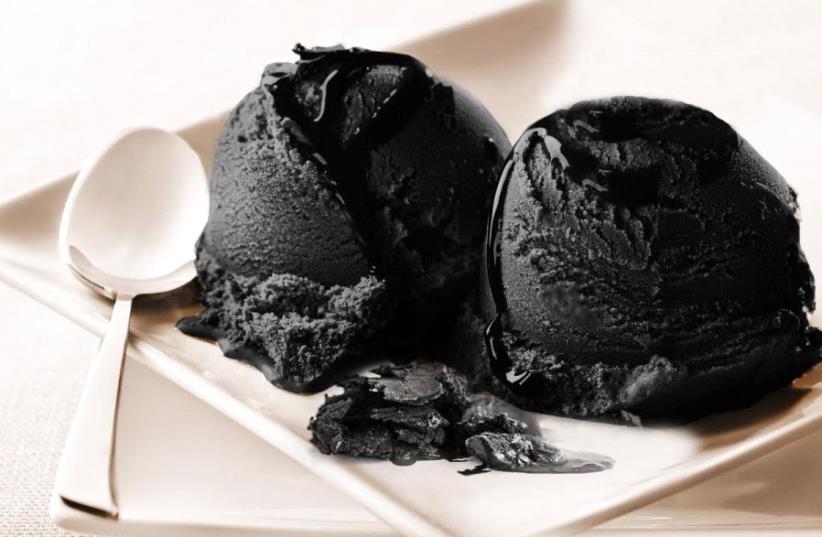 Black ice cream trend hits Tel Aviv
(photo credit: COURTESY ICEBERG)
Advertisement
Quick, before it melts – snap a photo! It’s already the norm for foodies and eager diners to take pictures of their food before digging in, but a new treat is bringing Instagram dining to a new level. The craze is black ice cream, and after conquering America, it’s finally hitting Tel Aviv this month.The dark-hued treat is now available in two popular ice-cream chains in Israel: Buza and Iceberg.At Buza, the black confection is peanut butter-flavored, and is hitting all the chain’s stores by Sunday.

The intense color, Buza said, comes from the mineral zinc.Buza, whose original shop is in Tarshiha, has gained acclaim for not just its tasty flavors, but its origin story. The shop was started by a Muslim-Jewish team in the Galilee celebrating both ice cream and cooperation. Today, Buza (which means ice cream in Arabic) has shops in Tel Aviv and the Hula Valley as well.Iceberg went the more traditional route – if you can call it that – with its black ice cream: coconut. The chain has created a flavor much like the source of the original craze, using coconut ash – the charred remains of the coconut shell.“It’s very rich, its taste is very white and its color is very, very black,” said Tamar Tuvia, the manager of Iceberg. She told The Jerusalem Post that while the ice cream has arrived in all of its stores, some have already run out “because of the hysteria.”

Life is waaaaay more amazing when you go to @little.damage with a friend! Be sure to get in line by 10:30PM! : @miguelikess

“It’s brand new, it’s only been in stores two days, but people come in all day and ask to taste it,” she said.Iceberg has shops across the central region, including in Tel Aviv, Rishon Lezion, Holon, Ra’anana and Rehovot.The craze began last summer, at an ice-cream shop in New York City called Morgenstern’s Finest Ice Cream. And when the Los Angeles shop Little Damage opened earlier this year, selling charcoal-infused soft serve, the frenzy hit a new level.Black ice cream has been spotted in recent months selling in England, India, Russia and now – Tel Aviv.