Cafe 65 on Rothschild boulevard starts the morning off just right

Cafe 65 pays attention to the little things that some other restaurants take for granted. 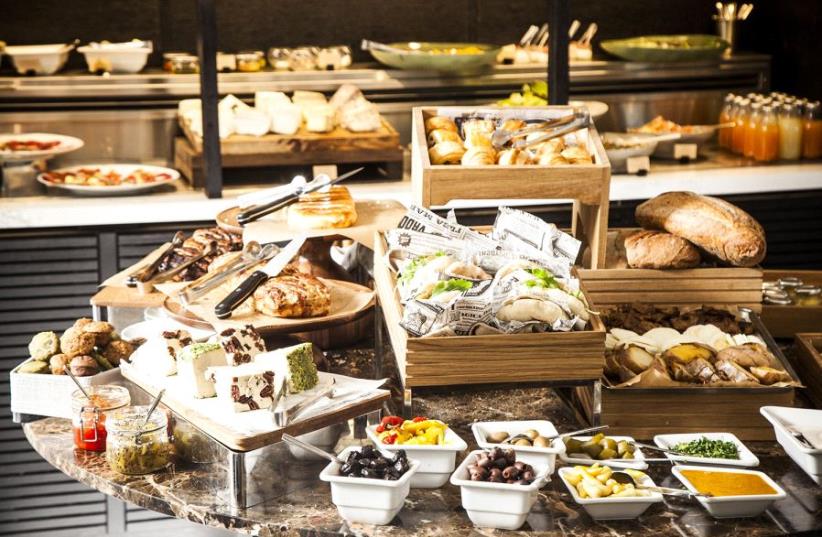 Breakfast foods at Cafe 65
(photo credit: AFIK GABAY PHOTOGRAPHY)
Advertisement
Cafe 65 has mastered the morning meal. Nearly every café has an Israeli breakfast on its menu, but only a handful make sure that the ingredients are top quality. Cafe 65 is one of these places. The cafe is part of  the relatively new 65 Hotel, named for its address, smack dab in the middle of the upscale Rothschild. Owners of the Atlas Hotels Group spent four years and hired celebrity architect Haim Dotan to renovate the building and add four floors to bring it up to its current eight stories and 74 rooms. Another of Cafe 65’s advantages is its outdoor seating. There is seating inside, but the cafe’s large patio overlooking the boulevard is by far the favored spots.After sitting down at a cozy table for two on a lazy Friday morning, my dining companion and I were eager to try the new Cafe 65 brunch special (NIS 95 per person). This includes a hot beverage, a breakfast buffet as well as a separate menu including a choice between five unique breakfast dishes. That day, the dishes ranged from eggs Benedict to green shakshuka and French toast. Cafe 65 does not have a kashrut certificate, even though all the ingredients are kosher and the kitchen is only dairy, as it operates on Shabbat in the same manner as the rest of the week.After ordering some hot drinks, we went to explore the breakfast buffet set up in a separate space at the back of the restaurant. A variety of cheeses were offered alongside salads of fresh vegetables and antipasti, marinated fish and ikra, several different kinds of halva, decadent pastries as well as a sabich corner, whereby they supply all the individual ingredients to make your own pita. One is really spoiled for choice.After enjoying an Americano and orange juice, we were served the green shakshuka with chard, spinach and goat yogurt. The shakshuka was seasoned perfectly, and the eggs were cooked just right. We were then presented with the eggs Benedict. I’m not an eggs Benedict connoisseur by any means but I’ve tried my fair share, and this dish was one of the best I’ve had. Atop two pieces of toasted brioche, the poached eggs were cooked to perfection, and the strips of smoked salmon on top provided the savory flavor I was craving. The Hollandaise sauce was lemony and buttery and just a little bit tart and not too rich. So many places make it from a tasteless mix, and you can tell.
Eggs Benedict at Cafe 65. Credit: Afik Gabay Photography
Last but not least we tried the French toast which consisted of brioche, berry jam, pear in wine and whipped cream. What made them so good was that they were light and fluffy but still had flavor and substance without tasting like cake. No syrup necessary, as the berries and cream delivered the perfect amount of sweetness.Without a doubt, this was one of the more memorable brunches we’ve had in Tel Aviv in quite a while! Simply put, they pay attention to the little things that some other restaurants take for granted.The writer was a guest of the restaurant.