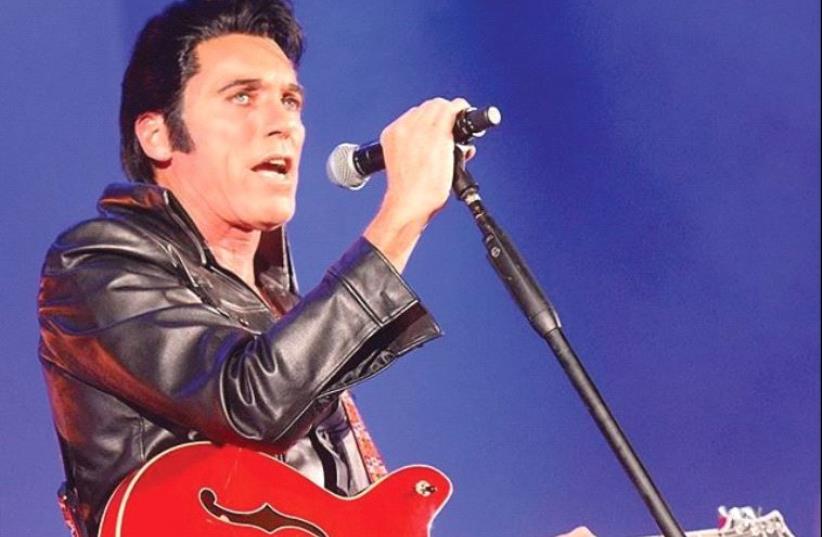 LEE MEMPHIS KING gets all shook up at the Charles Bronfman Auditorium in Tel Aviv
(photo credit: YUVAL ERAL)
Advertisement
Elvis Presley, Chuck Berry, Bo Diddley and Buddy Holly brought rock ‘n’ roll Torah from Sinai and gave it to such prophets as the Beatles, Beach Boys and Bob Dylan, who then gave it to the Great Assembly. Like that other fabled leader who brought eternal truths and wisdom down from on high, Elvis never reached the Promised Land. For his sins, he was taken from us early.Yet a remarkable simulacrum of Elvis, the most important popular music artist of the twentieth century, performed in Tel Aviv over the weekend. Lee Memphis King, a British Elvis Presley Tribute Artist, treated enthusiastic sellout crowds at the Charles Bronfman Auditorium to full-on renditions of Elvis Presley’s hits.King went far beyond dying his hair black and singing in a ringing baritone. He brought three costume changes, replica guitars, choreography and a crack backup band to his recreation of the King of Rock ‘n’ Roll. The show opened with the look, feel and songs of the fabled Singer Special, an electrifying 1968 TV program that rescued Elvis’ career by putting him in front of a live audience for the first time since a desultory decade of formulaic films had brought him to the edge of cultural irrelevance.Lee Memphis King’s black hair, sideburns and skin-tight black leather suit elicited a collective gasp and wild applause from the Tel Aviv audience, as did note-perfect renditions of such early tunes as “That’s All Right, Mama” and “Heartbreak Hotel,” and later songs such as “Trouble.”For me, the high point was when King and several of his musicians sat with acoustic guitars and drumsticks for a medley of classic blues that echoed a set piece of the TV show. King’s performance of “One Night,” a lusty blues number whose lyrics were so R-rated it was not released for nearly 30 years, echoed the original’s wistful lewdness.King then swapped his black leather for a double-breasted white suit and red tie to perform, “If I Can Dream,” a gospel- tinged hymn which imagines a world of racial harmony. The song, demanded by Elvis over his manager’s objections, was a controversial statement, coming as it did at the end of a racially turbulent and violent year in America.The second half was filled with crowd pleasers from Elvis’ rhinestone- studded Las Vegas era, including a deeply sad “My Way,” and his final chart hits, “Suspicious Minds,” and “Burnin’ Love,” all of which were delivered with power, enthusiasm and Elvis’ signature karate moves.The show opened with a video of Elvis’ early days and a quote from John Lennon: “Before Elvis, there was nothing.” Lennon was as right as he was wrong. Elvis always acknowledged the blues, country and gospel artists whose music he absorbed and advanced. Yet anyone who has ever played, listened to, or been moved by rock music owes Elvis a great debt.Lennon was doubly wrong in 1977, however, when he was asked to comment on Elvis’ death. Elvis died in 1958, Lennon said, meaning that the King’s music never returned to its original heights after his US Army stint. Yet Elvis recorded and performed many unforgettable songs in the 1970s. And as long as tribute artists such as Lee Memphis King are performing, Elvis will never leave the building.