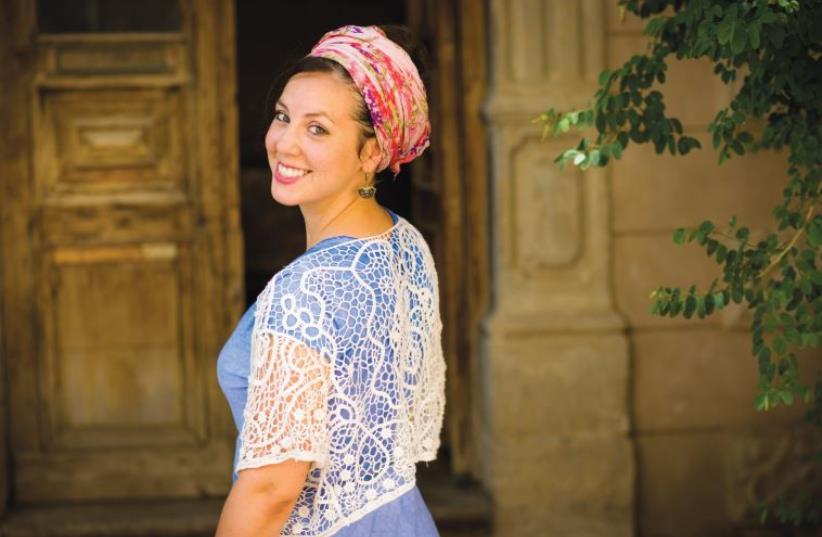 ‘IN ROCK and roll I heard the intensity I’d heard when I went to synagogue with my father and I heard the cantor. I felt a sort of emotional uplifting from the music,’ says singer-songwriter Ruth Nudelman.
(photo credit: ERIC SULTAN, MAARIV)
Advertisement
Ruth Nudelman always knew she’d be a musician.“I come from an Argentinian home,” says the twenty-something mother of two whose debut album, Kavei Mitar (Contours), was recently released, and which Nudelman will officially launch at Bet Hayotzer in Tel Aviv Port tonight at 8:30 p.m. “I started on piano. There was lots of music at home – operas, Latin music and other stuff.”It was just about wrapping one’s ears around an eclectic range of sounds. The singer-songwriter and her siblings were also expected to gain some hands-on understanding of musical machinations.“Part of the tradition of the Nudelman family was to learn to play an instrument,” she notes. “It wasn’t a matter of becoming a professional, just learning to play something as a hobby.”Even so, Nudelman began to take her musical learning curve increasingly seriously.“I went to a religious girls’ school in Jerusalem and, in a few afternoons a week, I’d go to the [Rubin] academy [of Music and Dance of the Hebrew University] to develop my musical ear, and I took classical piano lessons there too.”The youngster was just looking to gain a better handle on the mysteries of music, but she got a lot more than she bargained for. She not only learned from her teachers but also benefited from the social interface with her peers which led her into previously unexplored and unknown directions.“I met guys of my own age who were already writing crazy classical compositions and listening to all sorts of crazy stuff,” Nudelman recalls. “That’s when I got into heavy rock too, and all sorts of experimental things which I didn’t really get from the religious education system.”It was around that time that Nudelman segued into her teenage rebellion phase and broke out of the religious fold for a while. It was a tempestuous time for the youngster and she found herself picking her way across some rocky waters.“It put me in an interesting place,” she says with a touch of understatement. “You know, at home everything was clear – what’s good, what’s bad, black, white, what to wear, how to think.”Not that it was all bad, mind you.“There is something comforting about having everything structured for you,” Nudelman continues.“Today I look back on that with a sense of nostalgia. If you follow that path, that takes a lot off your shoulders.”Then again, Nudelman clearly isn’t the type to go for the easy life. The adventurous spirit, of course, lies at the core of any artistic endeavor and frontier bending is fundamental to breaking new ground, on a personal and a creative level, which, for any musician worth their salt, should be one and the same.While teenaged Nudelman lurched from one identity crisis to another, something epiphanous began to show its illuminating head through the muddied waters of youthful indecision. This was at a time when Nudelman attended Pelech High School in Jerusalem’s Baka neighborhood which, it says, sets out “to educate its students towards a love and understanding of Torah and Mitzvot through the broadest curriculum integrating high level Jewish and general studies with educational innovation, intellectual challenge, individual creativity and social commitment.”Nudelman was happily given free rein to work her way through her thoughts and feelings.“They allowed me to dress however I wanted. I had turquoise stripes in my hair,” she recalls. “I also went through a crisis which made me break away from religion. And then I find religion in music,” she adds with a smile.She needed some high-octane input to fuel her quest for a greater understanding of herself, life and the universe, as she went through school and the army and, later, through her musical education at the Rimon of Jazz and Contemporary Music in Ramat Hasharon.“In rock and roll I heard the intensity I’d heard when I went to synagogue with my father and I heard the cantor. I felt a sort of emotional uplifting from the music.”Nudelman also benefited from some valuable training, albeit in a very different sphere, in the army. She served in the Education Corps and found herself teaching Hebrew to combat soldiers born abroad. “That’s where I learned to ‘perform’ for an audience,” she says.“It wasn’t easy.”She learned another valuable lesson about the practicalities of creative pursuit when she attended lesson at Rimon, given by veteran rocker and current Rimon head Yehuda Eder.“We had to write a new song every week and... perform [it] at the next class,” Nudelman explains. “I learned then that it was no good just sitting around waiting for inspiration to show. I learned there was a technique to it too, and that you had to work at it.”Prior to the Rimon excursion, Nudelman had tried her luck with some classes at the Open University, including musicology, but nothing really fired her imagination. She got that in buckets at Rimon.“I moved to Ramat Hasharon and enrolled at the school. I lived and breathed music round the clock. I got bands together, and I grabbed the chance to perform whenever I could.”The results of that steep learning curve are evident in Kavei Mitar, as well as the influences that have informed her evolutionary path to date. The album includes balladic material alongside some rough and ready rock sounds, while the lyrics impart a sense of intimacy, and lessons learned.The CD launch gig is, in fact, a double-header, with poet Sheleg Ben-Shitreet reading excerpts from her forthcoming book of poetry and liturgical material, with actress, model and TV presenter Yael Aboukassis putting in a guest appearance.

For tickets: (03) 611-3577 and http://bama.acum.org.il.
Advertisement
Subscribe for our daily newsletter