Dance: Shifting between fantasy and reality 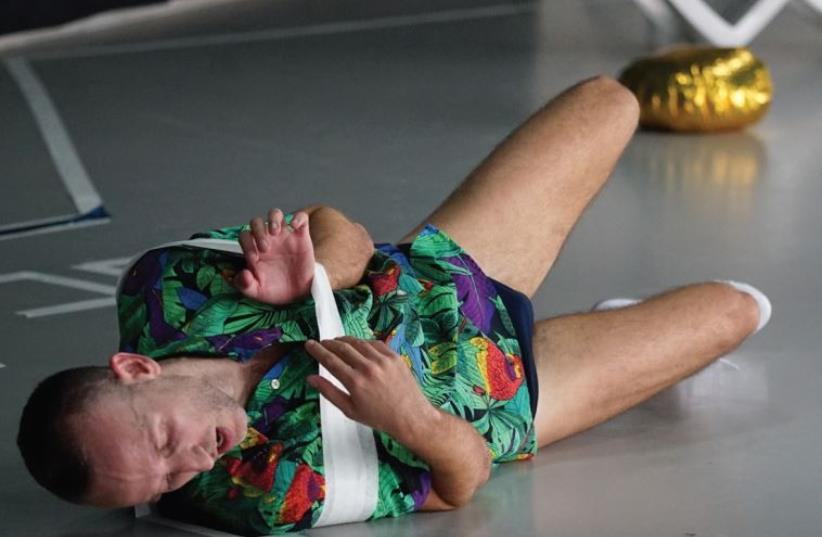 Oded Graf and Yossi Berg present ‘Come Jump with Me’ in Jaffa
(photo credit: GADI DAGON)
Advertisement
While most dancers warm up by doing yoga or stretching, Oded Graf, Yossi Berg and Olivia Court Mesa prepared for their days of rehearsal by reading the news.“We would come into the studio and talk about what had happened that morning or the day before, and then we would say, ‘Okay, let’s start.’ We felt like we couldn’t talk about anything else. So we decided to just let it be part of the warm-up,” says Graf.Graf and Berg, a long-standing creative team, will unveil a new work next week entitled Come Jump with Me. The premiere will take place as part of the Bistrizky Foundation’s Choreographers Curate Series at Warehouse 2 in the Jaffa Port.“The recent climate in Israel permeated this process. It put the making of art in a very specific perspective,” Graf adds.Berg and Graf have been creating together for more than a decade. The two joined paths after each had honed his skills dancing for major troupes such as Batsheva Dance Company, the Kibbutz Contemporary Dance Company and the British DV8. As a team, Berg and Graf established their esthetic by incorporating intensely demanding movement with text, humor and storytelling. Their work has been seen and enthusiastically received by audiences throughout Europe and North America.Come Jump with Me marks many significant breaks from the duo’s established way of working. This is the first process that Berg and Graf have chosen to undergo in Israel in more than a decade. Though they are firmly based in Tel Aviv, nearly all their work, such as Animal Lost and Black Fairytale, has been made abroad, often as co-productions with Danish organizations. The decision to keep things local had a deep impact on the artists and the outcome.“When we make work abroad, we are disconnected from the surrounding culture in many ways.It’s a very different experience making work in Israel. To feel a lot for the place and then go into the studio was so different for us,” says Graf.“The reality here really touches me. I have to constantly think about how much I let it bubble up into the work. Maybe, for the first time, I’m ready to let those feelings into the work. I think that until now, I didn’t know how to express those influences with my body,” says Berg.“If in the past we were dealing with who we are and what we are, here we are dealing with who we are in relation to the place that we are living and working in.”Another significant decision and a type of closing of the circle was the choice to create a duet.“We haven’t made a duet since our first piece together, Heroes, which we performed together,” explains Berg.“In Come Jump with Me, Yossi is inside and I’m out, which is also new to us. Usually we are either both performing or both on the outside,” adds Graf.Early on in the process, Berg and Graf felt that they needed a female influence. Court Mesa was a natural choice for this work. Originally from Chile, she had worked with the two in the past as part of the Israeli cast of Animal Lost.“It’s very significant that it is a man and a woman. The piece talks about romantic love; however, it doesn’t ignore the fact that he is gay and she is a mother. Olivia is not from here, but she has chosen to live here, which carries a lot of weight for us,” says Graf.Focusing on two characters allowed Berg and Graf to take their use of text to a new level.“There is always a biographic element in our work. Here, we took it a step further. We allowed the facts of our lives to become an arena that we could play around in,” says Graf.“We worked a lot with text during this process. I would go home and write and write. I found this amazing freedom in that. One month ago, the entire piece was text. But as we went, we found places where we wanted to let the body speak without words.”“It gave way to a fantastic reality in which we zigzag back and forth between things that are true and things that are imagined,” says Berg.

‘Come Jump with Me’ will run at Warehouse 2 in the Jaffa Port on November 26, 27 and 28. For more information, visit www.choreographers.org.il.
Advertisement
Subscribe for our daily newsletter