Dudu Tassa: From Israel to America...with a stopover in Iraq

The 'Post' sat down with Dudu Tassa to find out what it’s like to tour the world, with Radiohead no less, revive his grandfather’s music and create music that he (and everybody else) loves.

Dudu Tassa - Latrib Ani Utruch Berlin Sessions x Tel Aviv (Courtesy)
Advertisement
After five successful solo albums, Israeli rock musician Dudu Tassa released an album with his band Dudu Tassa and the Kuwaitis in 2011, inspired by the Iraqi music of his late grandfather and great-uncle. The vocals are in a Jewish dialect of Iraqi Arabic. The band has since toured extensively in US and Europe, playing at festivals such as Southwest by Southwest, Babelmed, SZIget, Womex, Coachella and Ostrava. Their hit “Latrib Ani Utruch” also serves as the theme song for the internationally acclaimed Israeli television series Fauda, and last but not least, Dudu Tassa and the Kuwaitis opened for Radiohead on their 2017 tour.The Jerusalem Post sat down with Tassa to find out what it’s like to tour the world, with Radiohead no less, revive his grandfather’s music and create music that he (and everybody else) loves.I heard that you and the Kuwaitis just came back from abroad. Where were you? We were in Turkey performing at the MIX Festival. It was amazing and I was very surprised by how the Turkish people received our music; the whole audience was dancing and it was really fun.Did you learn Iraqi Arabic or grow up knowing the language? I learn the texts of the songs themselves but I don’t speak the language fluently. I am learning new words every day and am trying to learn all the time.What is it like to open for Radiohead? How did you guys meet? I’ve known Radiohead’s guitarist, Jonny Greenwood, for 15 years. I met his wife’s sister on vacation in northern Israel and then they came to one of my shows. From then on we kept in touch and when my first album with the Kuwaitis was released, he really liked what he heard and uploaded our album to Radiohead’s website. It was crazy and really exciting.How was it to be with Radiohead on tour? It was an unbelievable experience, something every musician dreams about, and we achieved. We performed on the biggest and most professional stages out there and it was very exciting to bring my grandfather’s music to these places with such respect.How did the American audience respond to your music? They liked it a lot. Some people at the concerts researched our songs before the show, and others came and didn’t know what they were getting into. The truth is that Radiohead’s audience and Radiohead themselves are very experimental people and really connected to our music. The fact that Radiohead gave us a chance to come and present what we do on the stages we were exposed to says something about them. I guess it’s not by chance that they are one of the biggest bands in the world.BDS [Boycott, Divestment and Sanctions] supporters called for Radiohead to cancel their show in Tel Aviv, but frontman Thom Yorke made it clear that he was against the BDS movement. Do you think you had an influence on his stance? Was this something you spoke about on tour? We never spoke about BDS. I think that if they hadn’t attacked him and acted the way [Pink Floyd frontman] Roger Waters did, he wouldn’t have acknowledged it. His statements against BDS were reactions to BDS supporters accusing him of so many things for performing in Israel. I do believe, however, that there is significance to that fact that Radiohead chose us to go on tour with them – because they knew that they were ending their tour in Tel Aviv and because they wanted to bring people from Israel. They are pro-freedom to create, freedom of choice and unbounded musical expression. 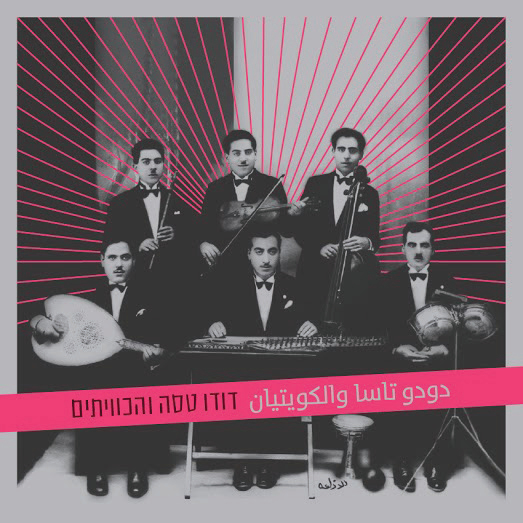 Dudu Tassa and the Kuwaitis album cover. (Courtesy)
How is it for you to perform around the world as an Israeli performing in Iraqi Arabic? The truth is that it is a very complex story to be Jewish, have Iraqi roots and to live in Israel. It is unclear to someone foreign, from America or Europe, when they hear that. But that is its beauty.Your music with the Kuwaitis is very different from your solo albums and far from mainstream in Israel. Were you surprised by how well received your music was here? Of course I was surprised. I thought that most people wouldn’t connect to the album and it would be a nichelike album and then it blew up and was really successful.Who is your audience at the shows? Does it differ from your Hebrew concerts? Everyone: old people, young people, Mizrahim, Ashkenazim, Jews, Arabs and everyone connects to their own place with the music.How is it to perform your grandfather’s music? How was it for your family? My parents are very proud and especially my mother gets very emotional when I perform, and cries a lot, because it is her father. My first concerts with the Kuwaitis were very moving. I thought about what my grandfather would have said about our music. He passed away before I was born so I never met him, but I have a special bond with him because I am named after him.How is it to have fans from Iraq? I’m not following anymore, but I know that there are a lot of comments from Iraq on my songs on YouTube and maybe we’ll get there someday to perform. That’s the band’s dream, to perform in Baghdad.Other than bringing your grandfather’s music back to life, is there any other message you want to portray with your music? Music is something free. If you believe in and enjoy what you do and are doing it from a genuine emotional place, don’t be afraid to do what you believe in. Allow a lot of freedom to create – people understand it and appreciate it.Who are your musical inspirations? You actually wouldn’t be able to hear it in my work, but artists that I really look up to, love and listen to are: Paul McCartney, David Bowie and Zohar Argov and Shalom Hanoch that I grew up on.You started making music at a young age, did you ever think that you’d get to where you are today? I didn’t believe that I would get this far. I knew that I would surround myself with music, but I didn’t believe that I would succeed at making a respectable living from it, and that my day to day life would strictly revolve around music.
Dudu Tassa performs solo. (Lior Keter)
Are you focusing now more on your music with the Kuwaitis or solo work? What do you enjoy more? I like working on them both – it’s like asking “which kid do you like better?” I’m doing solo albums in Hebrew and at the same time also working on another album with the Kuwaitis, the third album with them.Where was your favorite place to perform? At the Southwest by Southwest music festival. We had a really great performance in a small bar and it was very intimate. The whole audience was on their feet dancing and that made it a really moving experience. It was a small concert, but I remember it as significant one.What should fans look out for next? I’m currently working on producing the next album with the Kuwaitis and planning a European tour this summer. There’s also a documentary movie of the tour in America with Radiohead that is going to be released soon, which I’m very excited about.What is your big dream? That it won’t end and will continue like it is now. We are at a peak right now, and on the one hand the top is a great place to be, and on the other it’s scary because these things are very dynamic. But we are monitoring it and are enjoying the success – after all, the most important thing is to enjoy the journey.