The Duke Ellington Orchestra will get audiences ‘in the mood.’ 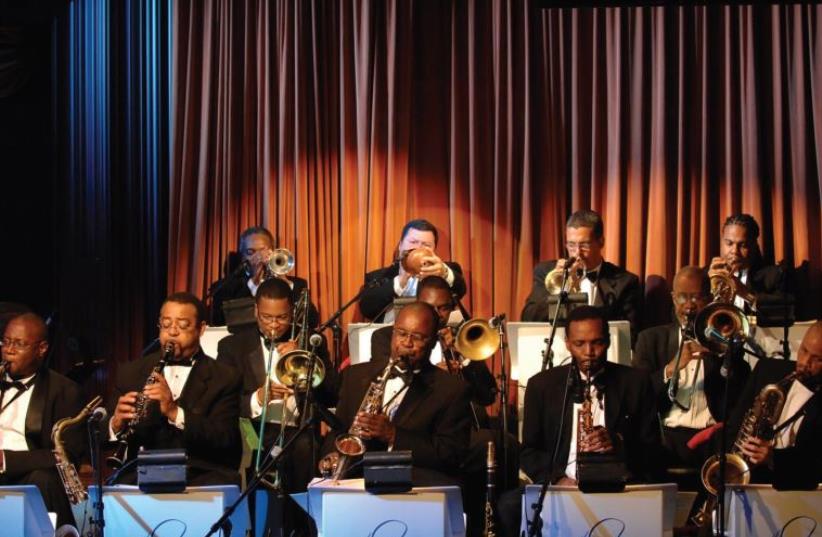 The Duke Ellington Orchestra
(photo credit: PR)
Advertisement
If there is one artist from the jazz fraternity who towers above the rest and whose names is synonymous with the evolution of the art form through much of the 20th century, it is Duke Ellington. Local fans of the celebrated composer, pianist and band leader’s work will soon have several opportunities to bask in some of the vibes he spawned when the Duke Ellington Orchestra comes here next week. The ensemble will appear at Beit Ha’am Heichal Hatarbut in Rehovot on May 14 (9:30 p.m.); Heichal Hatarbut in Tel Aviv on May 15 (8:30 p.m.); and the Congress Center in Haifa on May 16 (8 p.m.).Ellington, who died in 1974, left a huge oeuvre chock full of perennial favorites, such as “Take the A Train” “In a Sentimental Mood” and “Mood Indigo,” which will be featured in the orchestra’s repertoire here.Paul Ellington, the 37-year-old grandson of Duke, took on quite a mission when he assumed the band’s reins 18 years ago, following the death of the previous leader, Paul’s father Mercer. Unlike the previous transition of power, Paul had quite a job on his hands. The day after Duke Ellington’s funeral, on 27 May 1974, Mercer carried on where his dad had left off, and went on tour to Bermuda with left with the other players. Mercer Ellington had been in the band’s trumpet section since 1965, so there was a seamless change in helmsman duties.However, things were very different when Paul was thrust into the position in 1996.“I had a band that had lost a lot of its bookings because my dad had passed away. They tried out one of the senior members as a conductor, but there was still no work coming in,” he says.Ellington Jr. had to answer the familial clarion call, regardless of any other plans he had in his personal life.“I was the youngest grandson [of Duke]. I was going to the Manhattan School of Music, and I dropped out of that to go on the road with the band,” he recounts.The teenager’s personal sacrifices bore fruit.“We started getting a lot more shows,” he says. “At one point we were on the road for six or seven months a year.”That was mission completed as far as the young man was concerned and, with the orchestra’s ship firmly back on course, he decided it was time to get back to his own life path and make his own mark in the world.“When things turned around, I decided I needed to get back to school because I did not want to continue always being referred to as Duke Ellington’s grandson,” he declares.The creative genes are still there for all to see, although Paul opted for a different line of expression.“I’m still in the arts, but I switched fields a little bit. I took a left turn. I just graduated NYU with a master’s in film,” he says.Today, the ensemble is led by saxophonist, clarinetist and flutist Charlie Young.Although Paul was not around to meet his famous granddad, he still got plenty of insight into the machinations of the day.”I was named after Paul Gonsalves,” he says, referring to the celebrated saxophonist, who was Ellington Sr.’s right-hand man for more than 20 years. Gonsalves died at the age of 54, just a few days before Ellington, although Mercer kept the matter a secret from his father.“Paul Gonsalves was a professional drunk, but he was also my dad’s best friend,” says the younger Ellington.The reedman was also a peerless musician and contributed much to the revival of Ellington’s orchestra when it was going through a bad patch in the 1950s.“I have lots of stories about those times,” continues Paul, “some of which I can tell and others I’m not allowed to,” he adds with a laugh.While Duke is known primarily for his danceable numbers, his oeuvre is about as expansive as one could imagine. That is something his grandson lauds unconditionally.“I would say his legacy is the concept of never settling,” he proffers. “Just because you have had success doesn’t mean you shouldn’t try something else.”Paul says the great man was always looking for new challenges and never shirked a potential artistic or logistical land mine.“His attitude was that ‘a mistake is your opportunity to do your best’. I think, for him, writing in different genres and experiencing different cultures, working with [pianist, composer and arranger] Billy Strayhorn and his use of the [famed mob-controlled whites-only Harlem jazz venue] Cotton Club was very important, and that set the tone for American music. And then when he met Billy Strayhorn, in 1936-’37, his music developed into something even more incredible,” he says.The familial line of the orchestra may have been disconnected, but the band is still producing the goods and playing some of Duke’s most beloved numbers to enthused audiences all over the world. The 14-piece combo will, no doubt, deliver the goods here, too.