Food of the future 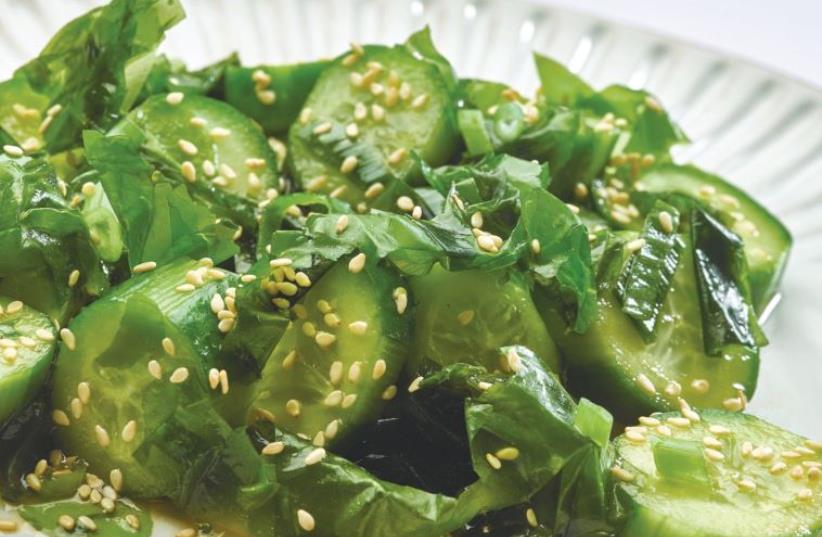 Seaweed and cucumber salad.
(photo credit: Courtesy)
Advertisement
Located in Michmoret, on the shores of the Mediterranean Sea north of Netanya, Israeli seaweed company Seakura, established in 2006, produces organic seaweed.Seaweed has long been labeled as the No.1 super-food and perhaps the food that will save us in the future. Seakura, considered a world leader in developing, manufacturing and harvesting the wondrous algae, grows seaweed on land.Throughout history there have been numerous references to using seaweed for gastronomical purposes. It is considered a major source of minerals that are easily available. Seaweed also contains more proteins, enzymes, fiber and vitamins than any other vegetable or fruit. Containing all nine amino acids and most of the minerals and vitamins that humans require, as well as a high level of antioxidants, seaweed is a wonderful source of iron and protein for vegetarians and vegans. Research has shown that the high content of fiber found in seaweed also helps in maintaining and losing weight.But it is not only about the health benefits.The seaweed grown at Michmoret has become a culinary trend in the world’s top establishments. Now, after a long wait, it is available for Israeli consumers.Seakura farms the organic seaweed under environment-friendly conditions. The Israeli technology is based on seawater that is pumped from the deep and then cleaned and poured into large containers, where the seaweed is grown and harvested. The fresh seaweed is packed for local customers or frozen and transported to chefs around the world. The water is then returned to the sea, cleaner than when it was pumped out.Seaweed is the base of all food pyramids.It is the oldest and most healthful of all foods. But the ecological balance of our seas has been disrupted due to pollution, and the seaweed growing in the oceans absorbs the pollution and is sometimes unfit for consumption. Believing in the idea of healthful, organic and sustainable food growing values and with the aim of restoring balance to the sea, Seakura grows the seaweed on land and offers customers the opportunity to enjoy the flavors and nutritious values of the seaweed while protecting our environment.In a recent presentation of Seakura’s products to culinary writers held at Meir Adoni’s flagship restaurant Catit, the master chef served the hungry foodies beautiful and tasty dishes. Every item on the eightdish menu, from starters to desserts, was prepared using Seakura seaweed. Adoni demonstrated how seaweed, no longer used only for sushi and Asian dishes, could be used in many dishes, adding flavor, color and nutritional value.The Catit recipes cannot be recreated at home, but here are a few easy recipes for dishes that make use of the seaweed, provided to us by Seakura. Sold in packages before being processed or chopped and frozen, the fresh seaweed is available at delicatessens, natural food stores or online at the company’s website.SEAWEED AND CUCUMBER SALAD
Serves 4 With fresh flavors and the aroma of sea air, this salad is a hit even among discerning children.✔ 100 gr. seaweed, washed, water squeezed out
✔ 4 to 6 cucumbers
✔ 3 Tbsp. soy or teriyaki sauce
✔ ¼ tsp.
✔ Juice of 1 lemon
✔ ½ bunch green onions, green part only
✔ 2 Tbsp. sesame seeds or chopped cashew nuts Chop the seaweed and the green onions. Crush the cucumbers with the side of a knife, remove the ends and chop coarsely.Mix the lemon juice, sesame oil and soy sauce together. Put the salad in a bowl and toss with the dressing.Lightly toast the sesame seeds on a dry skillet, sprinkle on the salad and serve.

ORANGE SOUP WITH SEAWEED
Serves 6 to 8 This thick, creamy soup has a light aroma of seaweed that makes it different and delicious.✔ 1 butternut squash
✔ 2 sweet potatoes
✔ 4 carrots
✔ 8 cloves garlic, minced
✔ 1 heaping Tbsp. grated ginger
✔ 1 fresh chili pepper, chopped (or 1 tsp.dry chili powder)
✔ Handful Seakura seaweed, washed, water squeezed out, chopped
✔ 1 cup cream of coconut
✔ 1 Tbsp. soy sauce
✔ 1 tsp. demerara sugar
✔ 1 Tbsp. lemon juice
✔ Salt and freshly ground pepper
✔ Sunflower oil Peel the vegetables and cut into small cubes.Pour a little oil into a pot and add the garlic, ginger and chili while the oil is still cold. Heat the oil and cook for a few minutes until fragrant. Be careful not to burn the garlic.Add the cubed vegetables to the pot, season with a little salt, and stir-fry 5 to 10 minutes. Add enough water to cover the vegetables and a little more. Bring to a boil and cook, simmering 20 minutes or until vegetables are soft.Using a hand-held blender, puree the soup until creamy and smooth. Add the chopped seaweed, coconut cream, soy sauce, sugar and lemon and stir. Bring to a gentle boil, taste and adjust seasoning.Serve garnished with seaweed.MUSHROOM, PECAN AND SEAWEED SPREAD
One of the best pairings is mushroom and seaweed – two umami flavors combined in one interesting spread.✔ 2 baskets champignon mushrooms, sliced
✔ Handful dry shiitake mushrooms
✔ Handful Seakura seaweed, washed and water squeezed out
✔ ²⁄3 cup pecans
✔ 1 red onion, halved and sliced
✔ 3 Tbsp. dry white wine
✔ Salt
✔ Freshly ground pepper
✔ Olive oil Soak the shiitake mushrooms in boilinghot water for 15 minutes until they are soft.Drain and set aside.In a wide skillet, heat a little olive oil and sauté the onion for 5 minutes until soft and golden. Add the sliced champignon and shiitake mushrooms. Stir and cook 2 to 3 minutes. Add the wine. Season with salt and pepper, stir and cook for 20 minutes.Transfer to a bowl and let cool to room temperature.If you have a lot of liquid, drain it.Transfer to a food processor bowl, add the seaweed and the pecans and grind to desired texture. You can add a little olive oil if you like.Transfer to an airtight container and cover with a thin layer of olive oil. The spread will keep in the refrigerator for 2 to 3 days. Recipes and photos courtesy of Seakura. For more details, go to www.seakura.co.il.
Advertisement
Subscribe for our daily newsletter