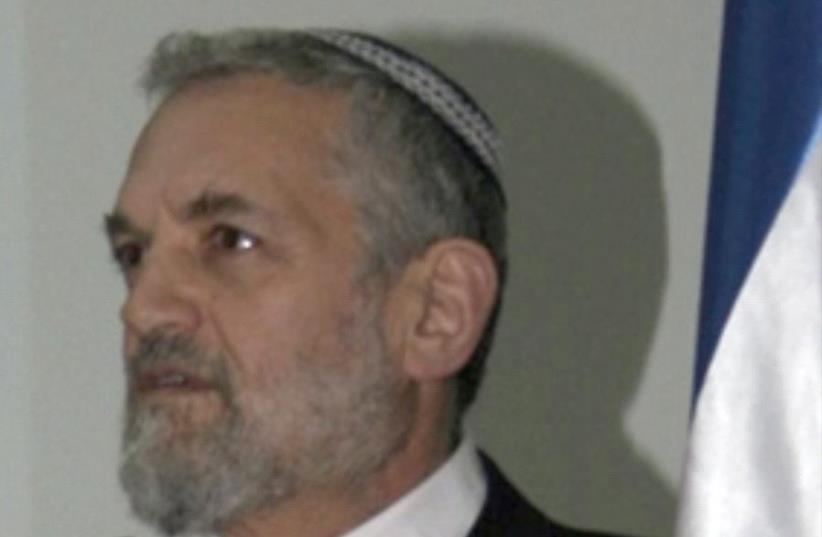 Benny Elon
(photo credit: Wikimedia Commons)
Advertisement
■ BIRTHDAYS, WEDDING anniversaries and other joyful occasions are always a good reason for synagogue congregations to hold a kiddush. At Shir Hadash in Emek Refaim, they celebrated the birthday of Tova Kramer, one of the mainstays of the congregation, who became emotional when thanking everyone and urged them to continue to be there for one another with concern and caring. The warm, inclusive, largely Anglo congregation is very much like an extended family.Not far away at Hazvi Yisrael, where the congregation is also largely Anglo, and primarily comprises grandparents and great-grandparents, they also had a kiddush to celebrate two wedding anniversaries.Doreen and Eric Wolf were celebrating not only their 60th wedding anniversary but also the engagement of a granddaughter and the birth of a great-granddaughter. Jean and Andrew Balcombe celebrated their 50th wedding anniversary and the 10th anniversary of their aliya. Jean Balcombe doesn’t look old enough to be married for half a century, and was asked whether she’d been a child bride. A former chairman of the Zionist Federation of the United Kingdom, Balcombe continued in that role for two years after making aliya.■ WHEN HE lived in Jerusalem, Gavi Friedson was a United Hatzalah volunteer from the time that he was a teenager. From 2006 to 2016, he responded to 9,000 emergency calls, and still responds during his brief visits home from the United States, where he is the United Hatzalah representative. Friedson travels from coast to coast, spreading the United Hatzalah message and raising funds for more ambucycles to enable more volunteers to respond quickly to emergency calls.Back in Jerusalem for a few days for the launch of 70 new ambucycles in honor of the 70th anniversary of the state, Friedson as usual responded to emergency calls and, last Saturday, dealt with five cases.■ FRIDAY, APRIL 20, the Tamar, Nechama and Modi’in chapters of Hadassah Israel are launching a walkathon at Anabe Park in Modi’in, which is located next to the city’s transportation hub. The event will take place from 9 a.m. to 12 noon. Jerusalem participants can travel by a bus leaving from the Inbal Hotel at 7:45 a.m. Proceeds from the event will be earmarked for the soldiers’ rehabilitation center at Hadassah Medical Center on Mount Scopus. The price for participation is NIS 60, plus NIS 50 for the round-trip by bus. In addition to the walkathon, there will also be a Friday shuk in the park.■ EVEN THOUGH Australia has not yet officially recognized Jerusalem as the capital of Israel, despite the fact that Australia was the first country in November 1947 to vote in favor of the partition of Palestine, a series of Australian ambassadors have, for several years now, conducted the annual ANZAC Day Memorial Service for Australians who fell in battle on foreign soil in all the wars and peacekeeping efforts in which Australia has participated. Current Ambassador Chris Cannan is doing the same, even though the Commonwealth War Graves Cemetery on Mount Scopus is not the only place in Israel where Australian soldiers lie buried. The service this year will be held on Wednesday, April 25, at 10 a.m.■ ALMOST A year has passed since the death of Rabbi Benny Elon, a former tourism minister and a prominent figure in interfaith relations.Elon died after fighting an 11-year battle against throat cancer. A tribute to his memory will be held on Tuesday, April 24, at 6 p.m. at Heichal Shlomo, 58 King George Avenue, Jerusalem. Speakers will include Education Minister Naftali Bennett, Shibi Elon, Tamar Elon, Rabbi Elhanan Nir and Sephardi Chief Rabbi of Jerusalem Shlomo Amar.■ Tunisian-born Rabbi Yehuda Getz, who died in September 1995, came to Israel in 1949 and settled in the Galilee. He joined the IDF and rose to the rank of lieutenant-colonel. When his only son, Avner, was killed in the Six Day War, Getz moved to Jerusalem and, soon after, became the first rabbi to be known as the rabbi of the Western Wall, a title he held for 27 years. It was on his watch that excavations at the Temple Mount were initiated in July 1981. On Sunday, May 13, Beit Harav Getz, in conjunction with Ramot Shapira, will host a day in Jerusalem, with the emphasis on the image of Getz. Events will include Torah studies, a documentary film about Avner Getz, street theater, a discussion about the paratrooper who was unable to touch the stones of the Western Wall, and a discussion on the Western Wall through the eyes of its first rabbi.For further details and registration call *5699 or beitharavgets@ramotshapira.org.il