Moshe Segev dishes out on US President Donald Trump’s food tastes and dinner with the Netanyahus. 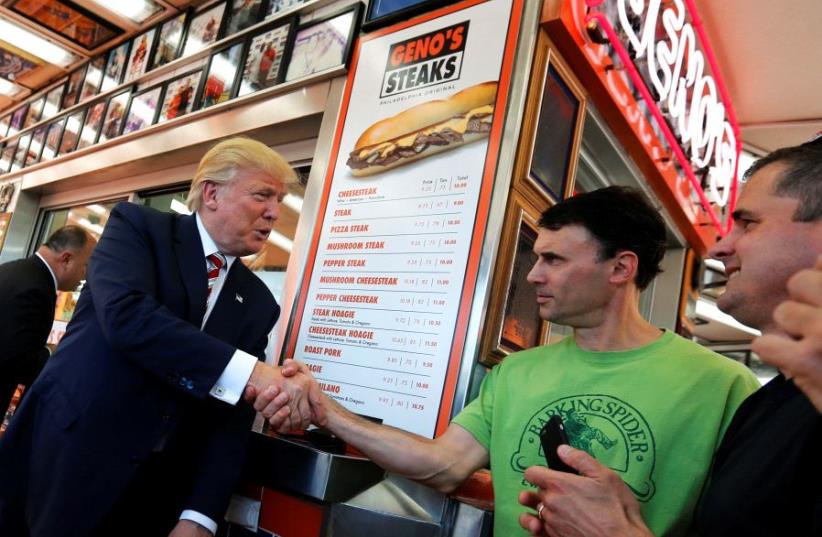 Then-Republican presidential nominee Donald Trump greeting people as he waits for his order on a stop at Geno's Steaks cheesesteak restaurant in Philadelphia, Pennsylvania, September 22, 2016
(photo credit: JONATHAN ERNST / REUTERS)
Advertisement
Israeli celebrity chef Moshe Segev isn’t satisfied with his local fame and his five restaurants around the country. Now he’s looking to conquer New York.Segev appeared on Fox News’s New York affiliate on Tuesday to discuss cooking for US President Donald Trump and Prime Minister Benjamin Netanyahu in Jerusalem last month.When asked about the experience, Segev laid it all out for anchors Rosanna Scotto and Greg Kelly: “I want to tell you, honestly, my prime minister knows how to eat his meat, but Mr. Trump...”“Well done!” Scotto interjected.“Like a rock!” Segev agreed.Trump’s predilection for well-done beef is well known in the US media and horrifies chefs and foodies, who agree medium-rare is the way to go.“Why?!” Segev exclaimed. “It’s not the American way... No, no chance, not in Manhattan.”Segev served up a multi-course feast for the president and his wife, Melania, including a hamburger-slider appetizer, and of course, well-cooked beef for Mr. Trump.The main course was a beef fillet with barbecue sauce and red curry foie gras, pureed potatoes, sautéed spinach and herbs.Segev, who also hosts an Israeli cooking TV show, told the Fox hosts that he hopes “maybe someday down the road” to open a restaurant in New York. On the Fox show he prepared a “spicy sprout salad” – that he called his signature dish – for his hosts and which he also served to the Trumps and Netanyahus.He explained to Scotto and Kelly how US security officials hovered over him in the kitchen while cooking for the Trumps, and even “followed me to the bathroom!” Segev was also in New York to take part in a huge fund-raiser hosted by one of the most famous and prestigious chefs in the US, Daniel Boulud. Each year Bouloud hosts a “Chefs' Tribute” event to benefit Citymeals, a nonprofit organization that helps feed homebound elderly residents in the region. The theme of the event this year – which included more than 30 chefs from around the world – was “Mediterranean.” It was hosted on Monday night at the Rockefeller Center skating rink. According to Maariv, this was the first year an Israeli chef has taken part in the event.