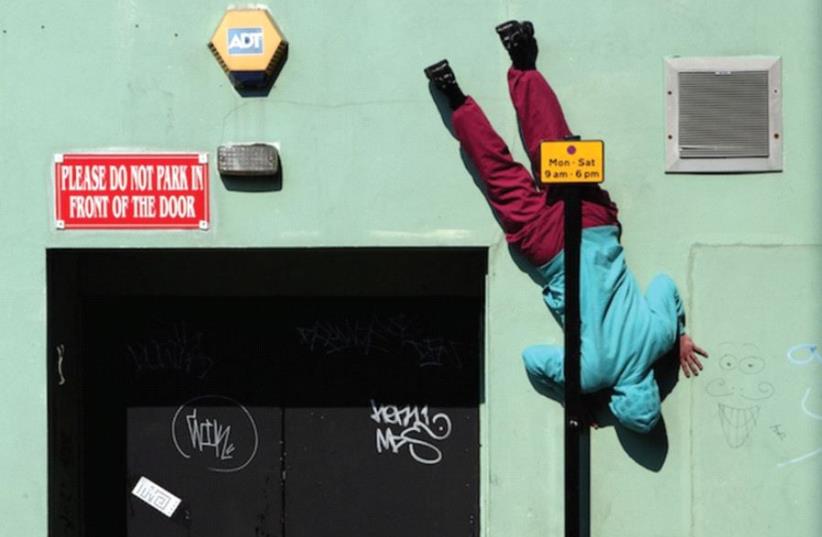 ‘Bodies in Urban Spaces’ By Willi Dorner
(photo credit: Courtesy)
Advertisement
In the past few weeks there has been a lot of talk about women – about what women do and do not do, how high the glass ceiling is, how a woman can effect change and what equality really means. There is no doubt that the cards are not stacked in favor of the fairer sex, yet looking around the Israeli arts community, it is clear that local women have found a way through, discovered a few loopholes and devised the means to make their visions come to life.A great example of a female-powered institution is the Kelim Choreography Center. Housed in a former army base in Bat Yam, the relatively new element in the dance community is quickly becoming the epicenter of all that is progressive in movement. Kelim was founded by veteran choreographer Anat Danieli with partners Tal Gravinsky and Morahn Bash. The three women set out to provide a platform for an esthetic way of working that had not had a home in Israel. Touching on styles widely accepted and practiced throughout Europe, Kelim devised an artistic niche based on kinetic and philosophical methods. This month, Kelim will host its annual March Hare festival.Mirroring the burgeoning success of the peripheral hub, the March Hare program has grown each year to span more days and to include higher-profile artists. This year, the six-day event will host the internationally renowned project Bodies in Urban Spaces by Austrian artist Willi Dorner.Many may recognize the images of this production, which features brightly outfitted dancers nestled into nooks and crannies of major cities.Dorner had planned to visit Israel in the past but was forced to cancel.This will be the first time that his dancers will fit themselves into the architecture of Israel. His cast will be comprised of the dancers from the Maslool Professional Dance Program in Tel Aviv.The festival will open with a premiere by Eilit Marom, Anna Massoni, Elpida Orfanidou, Rebecca Luise and Simone Truong. Titled Come and See, this work explores female sexuality in an unbridled and free-flowing way. The piece was created as a co-production of the International Choreography Center in St. Denis, Gessnerallee Zurich, and Theater Sevelin 36. The five women will lead an open workshop for professional dancers the following day, allowing the participants an up-close glimpse of their creative process.The second performance of the festival is also a co-production, this time of Israeli and Spanish choreographers. Maayan Horesh and Maria de Duenes Lopez have worked together for the past year in Israel and abroad on Betwixt Open Space, a performance that will take place in public spaces in Bat Yam.Day two will also feature Tamar Lamm and David Kern’s Because We Love You. The piece premiered last year as part of the Dance Arena Festival in Jerusalem and has since been performed around Israel. In their first work together, Lamm and Kern present a homelike space on stage, filled with items they collected in trash cans around their home. They work with movement, text, props, music and costumes to present a candid and open picture of their lives together.On Thursday, Yuli Kovbasnian will reveal her new work, Marie/Sorry, I Didn’t Mean It. For this solo, Kovbasnian drew inspiration from Marie Antoinette and the concept of performance as a lifelong endeavor.The evening will be shared with Shira Eviatar’s Rising.That same evening, Merav Dagan and Stav Marin will perform their intriguing duet Come Closer alongside Kineret Haya Max’s premiere of Continuing.On Friday, Avner Miriam Amit and Keren Ben-Eltabeb will show PELEPE, a study of intimacy and togetherness in a shared program with Moran Abergel and Kim Taitelbaum’s premiere of Zakik.Finally, on Saturday morning, Kelim will host the internationally successful workshop Contakids. Initiated by Itay Yatuv, the workshop invites parents and children to enjoy the principles of contact improvisation in a safe and free environment. Instructor Morahn Bash will guide the family teams through many exercises that bring about open movement and communication.

The March Hare festival will take place from March 20 to 25 in Bat Yam.For more information, visit www.kelim.org.il
Advertisement
Subscribe for our daily newsletter