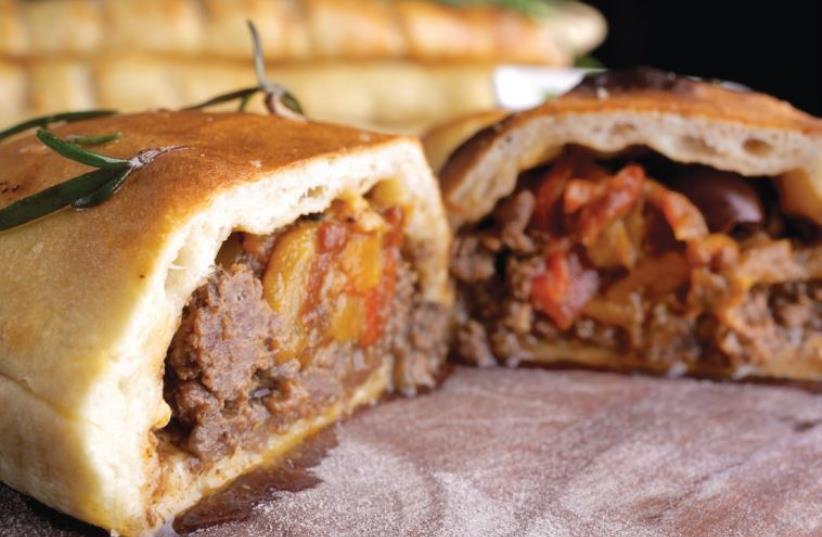 Lehem Basar restaurant
(photo credit: PR)
Advertisement
When the capital’s popular dining, entertainment and retail complex opened up at the refurbished site of the city’s former train station, the doubters insisted that religious clientele would shun the venue that featured live music on Shabbat. Then Lehem Basar came along and proved them all wrong, by attracting nightly crowds of satisfied diners.The literal translation of Lehem Basar is Bread (and) Meat; the sign in English on the restaurant, meanwhile, reads Meat and Eat. Either way, the spacious eatery proudly displays its kashrut certification, classified as mehadrin by the rabbinate.We started our meal off with two of the specialty house cocktails: the eponymous Lehem Basar (vodka, Martini Bianco, Cointreau, lime juice and lychee liqueur) (NIS 58) and the Royal Italiano (Van Gogh pomegranate liqueur with red grapefruit juice) (NIS 48). Fans of sweet drinks will enjoy the former; the taste of grapefruit is dominant in the refreshing latter.Since bread is featured so prominently in the restaurant’s name, and the breads and focaccias are all baked in the tabun on the premises, we ordered the house bread (NIS 16). We were brought a basket of several slices of a hearty-looking multi-grain bread, along with a red dip – and thus discovered the discrepancy between the English and Hebrew menus: The former suggests that there are two kinds of bread, and three dips, while it is indeed clear from the Hebrew menu that the one type of bread is sourdough multi-grain, and that it comes with one dip comprising three ingredients. Nevertheless, at our request, the accommodating English-speaking waitress happily brought us olive oil to accompany the excellent, warm, fresh bread.Our next experience can also be instructive: It turns out there are daily specials of soups (in the winter) and main courses, which are meant to be conveyed orally by the wait staff. In our instance, the waitress remembered only to explain the nightly wine special; so do not hesitate to ask what the food specials are if you are not told.We only discovered the oversight when speaking with Yadin Eden, executive chef of the Lehem Basar chain, which is affiliated with the Café Café Group. Eden, formerly the founding chef of Meat and Wine in Herzliya, was recruited to oversee the growing chain. The Lehem Basar branches in Tel Aviv and Jerusalem are soon to be joined by sister restaurants in Ramat Gan and the marina in Herzliya.For first courses, we ordered the lamb lahmacun (NIS 42) and the ceviche (NIS 52). The former is a golden brown, crescent-shaped turnover filled with deliciously seasoned ground lamb, accented with Kalamata olives and complemented perfectly by a creamy tehina dip.The presentation of the ceviche is singularly attractive, and the freshness of the raw fish evident; still, the dish lacked the characteristic zing of an authentic ceviche.The menu lists several cuts of steak, along with choices of size by weight, from which we chose the filet mignon (NIS 159/189). The moist and flavorful meat was grilled exactly as we ordered, with a superb crust; the side of roasted potatoes was a generous helping on its own plate. A lightly grilled, garlic-topped half tomato was a nice addition as well. Aficionados of chimichurri will find the version here exceptionally good.Since we had not initially been informed of the existence of the bone-in prime rib or braised spare ribs that evening, we had ordered the lamb sinia (NIS 88), a most impressive-looking dish with a pita crust covering the skillet. The description of a lamb stew with pine nuts and eggplant sounded different enough from our starter, but the two dishes turned out to be remarkably similar. I cannot say we regretted the choice, since both dishes are equally tasty; it’s just that if a table is sharing, there is no need to order the lamb twice.Fortunately, we did get the opportunity to taste the sumptuous spare ribs, which had been cooked for nine hours until the tender meat was practically falling off the bone. Served with a mildly spiced au jus sauce, they were also accompanied by assorted al dente grilled veggies.While some desserts are listed on the main menu, there is a separate dessert menu, with quite a few chocolate-based options. We chose the mango cream on hazelnut meringue coated with white chocolate ganache (NIS 42) and the apple crumble (NIS 42). The round caramelized apple pie was rich and satisfying; both desserts were accompanied by single scoops of halva ice cream that, like the cream in the mango dessert, unfortunately suffered from having to be pareve.Nonetheless, the meal as a whole proved that adhering to the strictest kashrut standards is no impediment to a positive overall dining experience.Lehem Basar (Meat and Eat) Kosher (Mehadrin) 4 David Remez St., Jerusalem Telephone: 1-599-50-05-05