A new brand of craft beer is on the market. 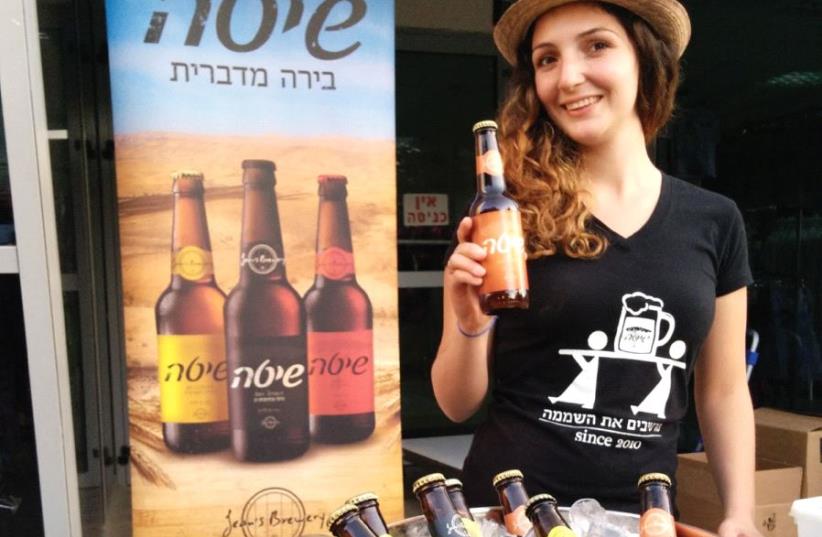 Sheeta beer
(photo credit: PR)
Advertisement
People who have been attending local beer festivals in Jerusalem and Tel Aviv for the past seven years or so probably have met Jean and Neta Torgovitsky. This home-brewing couple from Beersheba have been pouring their excellent beers under the Sheeta (acacia tree) label. Jean is from Lithuania, and Neta from Georgia (whose capital is Tbilisi, not Atlanta).So it was with great expectations that I greeted the announcement a few months ago that Jean and Neta had opened their own commercial-size brewery in Arad.“We thought we were doing something right,” Jean explains. “Our beers were winning prizes and getting very good reviews, so we decided to take the step into full-time commercial brewing.”They chose Arad because they were able to get facilities in the industrial park and also within the Artists’ Quarter.“It’s a beautiful place to be in,” says Jean. “We just had a graffiti festival, where street artists drew beautiful pictures on our outside walls. Later this month, we plan to open a beer garden in our courtyard.”The first three commercial Sheeta beers can be found in beer specialty stores and many liquor stores that carry Israeli craft beers, in addition to pubs in Tel Aviv, Beersheba and Arad. They also brewed up a batch of Pilsner, which won second place in its category in the recently announced Golden Beer 2017 competition, but this has been sold out.The Sheeta Weissbier is a 4.8% alcohol German wheat beer. It pours out a very cloudy dark-pale color with a creamy white head. The aroma is very typical for wheat beers, with notes of clove and banana, but there is also some yeast bread and refreshing new-cut grass. The taste is very strong on citrus fruits, peach and banana candy, with a long finish of bitter lemon.This is a wonderfully refreshing beer for the summer, even if, like me, you’re not a big fan of wheat beers. It goes well with most light foods such as salads, vegetable dishes, hummus, mild cheeses and fruit desserts.The Sheeta India Pale Ale (IPA) avoids the extreme hoppy flavors and bitterness that have become the hallmarks of this style. This makes it the perfect beer if you’re just beginning to try IPAs. The light copper color is a little hazy, with a creamy off-white head. The aroma is subdued; no aggression from the hops, but grapefruit and caramel. The taste is only mildly bitter with some banana and caramel, with citrus, tropical fruits and yeast in the background. With a light body and a very refreshing and dry finish, you want to take another gulp, and then another. And with the alcoholic content at 5.8%, you can let yourself have a second bottle and still get up from the chair.Pair this IPA with stronger and spicy foods like chilies and curries. It is also excellent with pizza.Continuing with moderation and balance is the Sheeta Oak Aged Dry Stout. The color is almost black, with a minuscule tan head. Dark chocolate, coffee and roasted malts are the immediate aromas, and they do go very well together. The taste is medium sweet, with more cocoa, coffee and roasted malt. The beer is really a dry stout in the Irish tradition (4.3% alcohol), with a medium body, very little carbonation and a very dry, astringent finish. As the name says, this beer is aged with oak chips, but I don’t know how this affects the beer.Dry stout is perfect for balancing the sweetness of grilled vegetables like onions and mushrooms, as well as cheddar cheese and rich desserts.The debut of Sheeta beers on the Israeli market demonstrates again that the public’s thirst for craft beers hasn’t been quenched. If you brew it right, they will drink it.

The writer is the owner of MediawiSe, an agency for advertising and direct marketing in Jerusalem. He writes a web log on Israeli craft beers at www.IsraelBrewsAndViews.blogspot.co.il.