The film adaptation of ‘Indignation’ captures the spirit, mood and intensity of the novel. 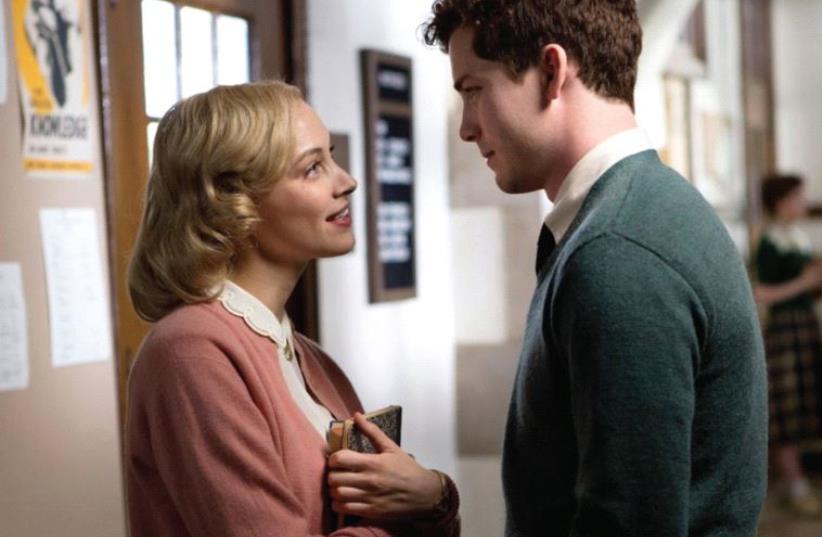 A scene from the film 'Indignation'
(photo credit: Courtesy)
Advertisement
INDIGNATION Hebrew title: Hitpachehut
Directed by James Schamus
With Logan Lerman, Sarah Gadon, Tracy Letts
Running time: 110 minutes
Rating: R (for sexual content and some language)Philip Roth is one of the greatest contemporary novelists, but his genius and complexity have made his work notoriously difficult to adapt. A few of the movie versions of Roth novels have been decent films, but they brought the books to life in only the most superficial ways.James Schamus’s Indignation breaks that pattern. It is the best screen adaptation of a Philip Roth novel, the only one that captures the spirit, mood and intensity of his work.Schamus, a legendary indie producer and screenwriter who collaborated with Ang Lee on such screenplays as Crouching Tiger, Hidden Dragon and Lust, Caution, has done a masterful job in bringing Indignation to life.Set in the US during the Korean War, the danger of that messy, faraway conflict shadows the action, and contrasts with the neat, rule-driven American institutions and locations. Marcus (Logan Lerman, The Perks of Being a Wallflower) is a brilliant Jewish high school student. He is the pride and joy of his parents, a Newark butcher (Danny Burstein) and a fiercely devoted mother (Linda Edmond). It might all sound familiar, even cliched, but the stakes are higher than they appear at first: Friends of his who were drafted have been coming home in coffins. When Marcus receives a scholarship to a college in Ohio, his parents see it as nothing less than an escape from death.But Marcus has mixed feelings about his move to an Ohio campus. It’s clear that being Jewish means he will be part of a distinct minority. An atheist, he finds it oppressive that his religion is what defines him now. Not coincidentally, he has Jewish roommates and doesn’t particularly like them, nor does he fit in with members of the Jewish fraternity, who try to recruit him.It’s not that he wants to assimilate — he hates the chapel attendance requirement and does not fit in with his gentile classmates. No matter where he goes, he feels uncomfortable.When he meets Olivia Hutton (Sarah Gadon), a free-spirited gentile young woman with moviestar looks, he thinks he has finally found what he is looking for. But although he is attracted to her, her sexual forwardness freaks him out.He withdraws from her, but she is determined to be a part of his life, and he finds it hard to resist her.Two standout scenes encapsulate Roth’s preoccupations. In one, Marcus’s mother comes to take care of him after he has been ill and, meeting Olivia, she zeroes in on the young woman’s instability. In a carefully realized scene, the mother begs her son not to throw this troubled young woman a lifeline, which the mother fears will only drag him down. She is being narrowminded and conventional, two qualities her son despises; and at the same time, both he and the audience can see that his mother is only too right.In the movie’s centerpiece, Marcus confronts Dean Caudwell (Tracy Letts, an actor and playwright who wrote August: Osage County), an authority figure who represents everything Marcus loathes, and expresses the indignation from which the novel and film take their title.As Marcus and the college dean argue, their conversation transcends the issues over which it started and becomes an existential debate over accepting versus challenging the status quo.Caudwell is traditional but not a stereotype. He feels passionately that he can help Marcus live a happier, more productive life. For Marcus, this argument, in which he risks alienating a man who can take away his scholarship, is extraordinarily bold, even selfdestructive.Here, in this tense, epic scene, Schamus lets Roth be Roth, as no filmmaker has been able to before, and the result is unforgettable.All the elements of the movie — the acting, production design, music and cinematography — are beautifully and meticulously done.Could Indignation represent the beginning of a golden age of cinematic Roth adaptations? It’s possible: The movie version of Roth’s novel American Pastoral will premiere at the Toronto Film Festival next week.In any case, Indignation is the first movie that brings the depth of Roth’s vision to the screen, but it is cinematic enough so that it will speak to audiences unfamiliar with the book.