Bindella is a respected name in the world of gastronomy. 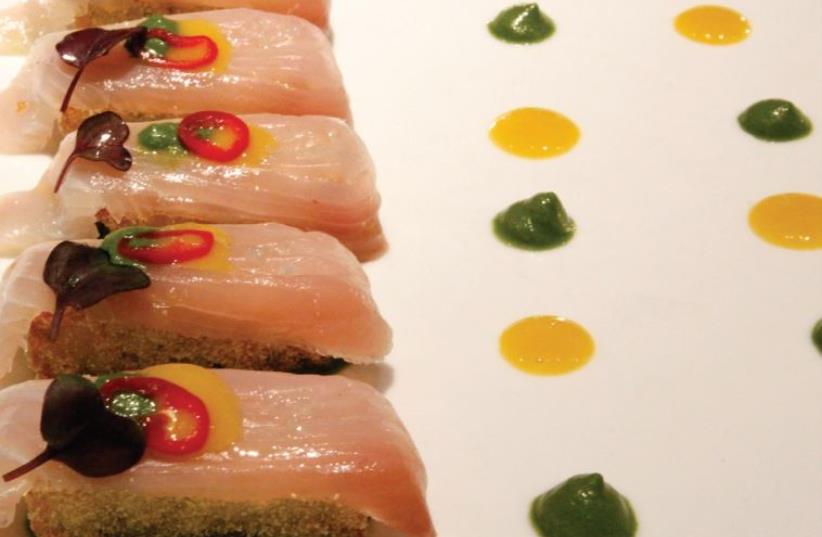 Bindella Osteria & Bar
(photo credit: PR)
Advertisement
Ive had many good experiences at many good restaurants, but Bindella Osteria & Bar has raised the bar a bit higher. It’s classy, the service is friendly and professional, it’s good for romance or business, and the food is outstanding.Founded in Switzerland more than over 100 years ago, Bindella is a respected name in the world of gastronomy. Today, it runs 40 restaurants in Switzerland and produces wine, grappa and olive oil in Italy. Tel Aviv-based Christian Bindella is the youngest son of the family and the initiator of Bindella, the company’s first restaurant outside Swiss borders.The interior is a tribute to the owner’s family vineyard in Tuscany, with a grape motif featured in the metal screens and continuing across the feature front door. The dim lights, intimate design and music all contribute to the special atmosphere of the place.Moments after we were seated, a waiter arrived with menus in Hebrew and English. Bindella’s menu is a culinary melting pot of Italian and Mediterranean cuisine, and chef Roi Soffer’s food is simple yet luxurious and indulgent. The complexity and diversity of the dishes was dizzying, even for a restaurant of this standing, but our waiter patiently reviewed the specials one by one as we tried to focus. First up was the beef tartare (NIS 54). This was one of my favorite appetizers of the evening. Slightly tart from the pepper spread and mustard, fresh and perfectly seasoned to pique your appetite. Typically the texture of beef tartare is quite gooey after you mix the meat with the egg yolk (which I don’t care for), but surprisingly this wasn’t the case. It maintained its texture without the excessive moisture from the egg.This was followed by the Sicilian cauliflower salad (NIS 51) with fresh herbs, arugula, almonds, hazelnuts and honey vinaigrette. It is a wonder how they are able to transform a cauliflower into a tasty work of art. The flavors of the ingredients mixed together perfectly, and the portion was very generous.In between we were treated to a variety of cocktails. My dining companion, who is quite the expert on cocktails, gleefully proclaimed that these were some of the best she had tasted.Next up was the open-faced ravioli (NIS 71), which consisted of king crab meat, shallots, green peas, white wine, cream and tomato butter. This dish was truly inspired in its simplicity. The pasta was done perfectly al dente, and the crab/sauce was amazing.After a little bit of a breather we tried the lamb ragout (NIS 78) with root vegetables served with tomato, garlic, mint, chili and fresh ricotta. It was absolutely delicious. The mint really brightened the dish, preventing it from feeling too heavy, the pappardelle was prepared al dente, and there was a good amount of rich, delicious lamb ragout. Yum!Last we were served the sirloin alla Bindella (NIS 129), accompanied by broccolini and shallots in a balsamic sauce. This is where fine dining meets great value. The steak was absolutely superb and done exactly medium rare. It should come as no surprise that I polished it off, but to see my dining partner’s plate completely empty at the end, too...well, let’s just say I don’t know where she put it. But it was that good! It came with a side of deliciously creamy polenta. The sweet offerings did not match the previous two courses. But having said that, they provided the sugar fix needed to end the meal. We tried the chocolate truffle, as well as the chai panna cotta.Everything from the hip vibe to the friendly service to the food was awesome. I will definitely be back very soon.The writer was a guest of the restaurant.Bindella Osteria & Bar
Not kosher
27 Montefiore St., Tel Aviv
(03) 650-0071
Advertisement
Subscribe for our daily newsletter