Reeling in the future 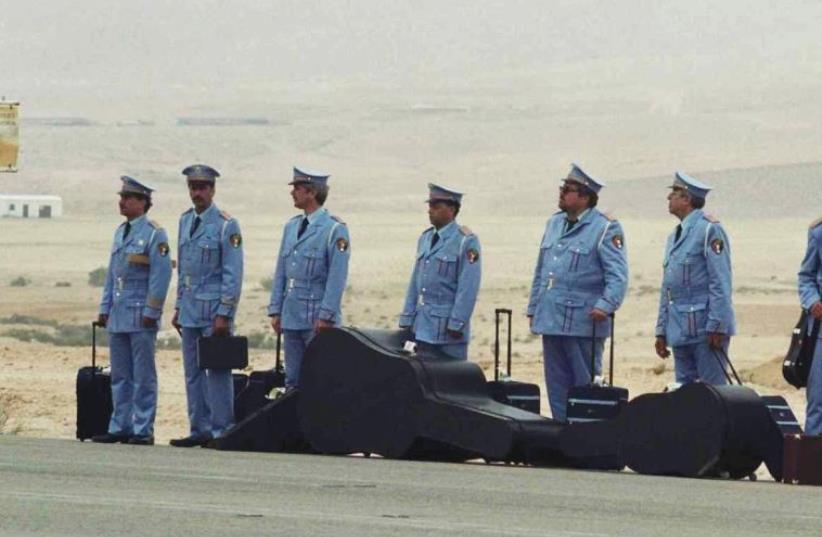 ‘The Band’s Visit'
(photo credit: Courtesy)
Advertisement
The Jerusalem Film Festival, which runs until July 19 at the Jerusalem Cinematheque, isn’t only about seeing movies – it’s also about creating them.A number of programs at the festival bring aspiring filmmakers together with producers, television executives and film fund representatives who can actually fund new movies.Many Israeli films that have become international hits got their start at the film festival’s Pitchpoint program, which is celebrating its 10th anniversary this year.Among the acclaimed movies that got funded at Pitchpoint are Shmuelik Maoz’s Lebanon (which won Golden Lion, the top prize, at the Venice Film Festival), Rama Burshtein’s Fill the Void (which won the Best Actress Award for its star, Hadas Yaron, at the Venice Film Festival), Eran Kolirin’s The Band’s Visit (which won 46 awards on three continents, including the FIPRESCI Prize at Cannes), Nadav Lapid’s Policeman (which was shown at the New York Film Festival), and Yossi Madmoni’s Restoration (winner of the Best Screenplay Award at the Sundance Film Festival).To get a glimpse at what’s coming up in Israeli cinema, I attended the Pitchpoint event on Monday morning at Mishkenot Sha’ananim.The nine projects I saw pitched by their directors and producers couldn’t have been more varied, and watching the filmmakers present was quite entertaining – although for them, of course, it was undoubtedly nerve-wracking.They described and even acted out moments from their films, and presented clips of short scenes, photographs and drawings of their projects.Yossi Atia plans to write, direct and star in Born in Jerusalem and Still Alive, a hybrid black comedy/ romantic comedy/documentary about a guy who gives tours of terrorist attack sites in Jerusalem and falls in love with a woman who takes one of the tours. Atia gave a hysterically funny quasi-stand-up routine as he described the movie, and then screened a clip in which the tour guide takes some bewildered Japanese tourists around the center of Jerusalem.Maysaloun Hamud, an Israeli Arab woman from a Muslim family, stood shyly at first in an Elmo T-shirt as she faced the crowd, but then became animated as she talked about her film, In Between, about three young Palestinian women who share an apartment in Tel Aviv, and who “live in the backyard of Israel-Palestinian society.” A clip from the movie was funny and thought-provoking.Eliran Malka’s The Unorthodox will be a fictionalized story of the man who started the Shas Party, then was pushed aside after the party became an important player on the national political scene. That’s a story that hasn’t been told before on film, and a clip shown with the presentation gave what the film’s producer, Keren Michael, called “a small taste of our script and its grooviness,” with bold graphics and rock music.Lior Chefetz’s Sky Raiders will be a family film, an “uplifting adventure” about a boy obsessed with flying who meets a grumpy air force veteran and restores and flies an old fighter plane. It sounds like the kind of movie Steven Spielberg used to make.Yona Rozenkier’s The Dive will be a tough family drama about three brothers on a northern kibbutz, the youngest of whom is about to go into combat and seeks guidance from his brothers, both of whom have experienced trauma on the battlefield in previous wars.Dani Rosenberg’s The Gospel According to My Father will be a tense drama about a Tel Aviv family that learns of an imminent Iranian nuclear attack. The father wants to flee to the relative safety of Jerusalem, but has to convince his dysfunctional family to accompany him.Screenwriter Roy Iddan presented director Oded Davidoff’s Live from Jerusalem, a black comedy about a not-very-disciplined British correspondent in Jerusalem who learns he is going to be transferred to Darfur and comes up with a plan to stage his own kidnapping by Islamic State, which goes very wrong.Ronen Shomanov’s No Future will be about young Russian immigrants to Israel whose motto is, “We have no future, but we have music.” A semi-autobiographical film, he said the movie would combine rap music and drama to tell the story.Hope and Despair will be a black comedy and a “neo-realistic fantasy” about residents of Tel Aviv’s HaTikva neighborhood, according to its director, Shahar Rozen.The jury for this session consisted of Karni Ziv, the head of drama and comedy for the Keshet Media Group; Ira Deutchman, chair of the film program at Columbia University and managing partner of Emerging Pictures, a digital exhibition company; Miroslav Mogorovic, owner of Art&Popcorn Motion Picture Company and Soul Food Distribution Company; Nelleke Driessen, managing director of Fortissimo Films Amsterdam; Pascale Ramonda, a producer and distribution agent; and Thanassis Karathanos, a producer and managing director of production companies.Pitchpoint also includes master classes for filmmakers and pitching for projects that are already in progress. The filmmakers whose projects are chosen will receive significant financial support.So in a year or two, these movies may be coming to a theater near you