The Hilton Lobby Restaurant has upgraded its decor and menu. 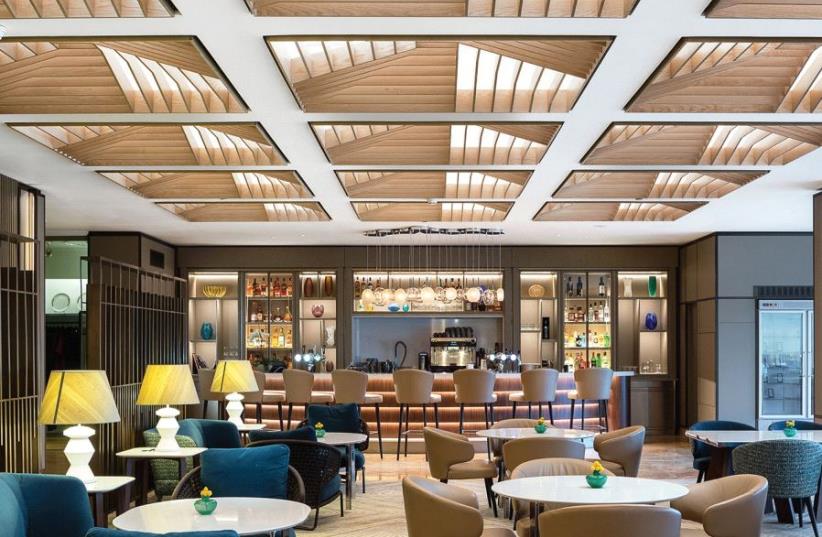 Hilton Lobby Restaurant
(photo credit: PR)
Advertisement
The Tel Aviv Hilton has always been the “in” place since it was built in 1965, but the grand old lady was looking a little tired. That was when management decided to give the iconic Hilton lobby a serious face-lift. For two and a half months the place was closed while designers, architects and electricians got busy.Today, one walks into a place of shimmering light and elegant furnishings that set the tone for the renovated lobby. The design of the thick white and beige carpets underfoot is reflected in the same shade and motifs on the ceiling.The marble-topped oval tables give a nod to Tel Aviv’s Bauhaus heritage, while the comfortable armchairs are made from dark turquoise and beige raffia. Long neutral sofas complete the look.The hotel is particularly proud of the newest celebrity chef in the patisserie, conditor Idan Haddad who, at 27, has an impeccable pedigree. Born in Nahariya to a Polish mother and a Tunisian father, he studied his craft at the Ecole Nationale Superieure de Patisserie in Paris and worked at Herbert Samuel and the Ritz-Carlton before taking up his present position. At the Hilton, he oversees the preparation of all cakes and desserts served in the lobby, assisted by 11 workers, many of whom are older than he is.“I admit to being a perfectionist,” says the serious young man with the responsibility of making a success of the lobby restaurant on his shoulders. We tasted some of his desserts and can only agree.Before getting to the desserts, however, we were able to taste some of the savories on offer in the lobby. There are, for example, pizzas (NIS 89/99), pasta dishes (NIS 78/94) and salads (NIS 68/94).We chose fish dishes. My companion had the sea-bass fillet with a variety of roasted vegetables on a base of flavorful tehina (NIS 120). I opted for the stuffed trout, forgetting, as I always do, that it’s not gray as in England but bright pink (NIS 141). The mushroom stuffing was very good, but we felt that the cooking of the fish had been overly enthusiastic.A glass of Chardonnay from the Tanya winery (NIS 46) accompanied our meal. It had a powerful tang with traces of red grapefruit and guava, according to the wine menu.To judge pastry chef Haddad’s work, we each chose our favorite flavor. I always go for lemon, my companion for chocolate.The lemon tart was simply divine: buttery short crust pastry surrounding a lemon filling that was sweet and tart at the same time. Every mouthful was heaven.My companion’s chocolate mousse was equally appreciated. It had white and dark chocolate mousse and was perched on a biscuit base and covered in smooth ganache.The lobby was quite busy with tourists and locals on the evening we were there. After Haddad becomes known, it will probably be bursting at the seams.The writer was a guest of the restaurant.Hilton Lobby Restaurant.205 Hayarkon St.,Tel Aviv Tel: (03) 520-2255 Open every day from 7:30 a.m. to 5:30 a.m.