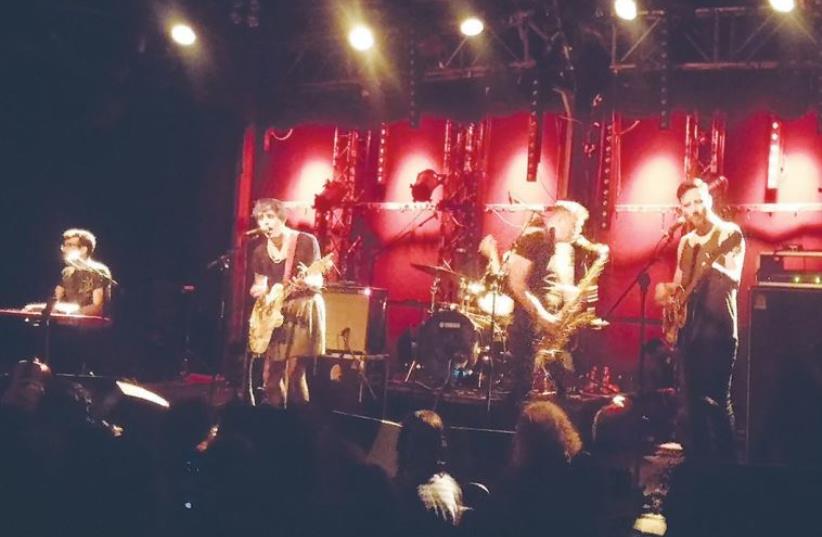 EZRA FURMAN (2nd from left) and The Boyfriends charm local fans at Tel Aviv’s Barby Club.
(photo credit: DAVID BRINN)
Advertisement
I’ve seen the future of rock & roll and he was wearing a skirt and a kippa.Well, not really... at least the part about the future. But California’s Ezra Furman did manage to make his singular attire, embellished with mascara and elegant sheer nylons, totally irrelevant on Wednesday night at the Barby Club in Tel Aviv.The 29-year-old California- based gender-bending, Shabbat-observing singer/ songwriter and his band, The Boyfriends, obliterated the small but enthusiastic crowd with a 90-minute set that knighted him as the long-lost love child of Ziggy Stardust- era David Bowie and The Cure’s Robert Smith.Ragged, intense, endearing and real, Furman bared his soul with a varied repertoire that meshed Velvet Underground guitars (he played a solo “Heroin” as a searing encore), soaring sax solos ala the E-Street Band, doo wop background vocals and punk energy. In other words, an amazingly tight band, being relaxed enough to follow their leader down any avenue.Furman’s shy, self-deprecating between-song patter contrasted with his frenetic performing energy and unpredictability.It was impossible to take your eyes off of him, lest you miss a gesture, expression or quip.“I usually feel like I’m such an outcast because I’m queer and Jewish. But this place is so Jewish and so gay, it’s great,” Furman told the audience early in the show. And the liberally mixed straight-gay crowd roared its approval.After the band left the stage and Furman finished “Heroin” with his back to the audience, he completed the show with a smoldering version of his own Dylanesque “Wild Feeling.”He prefaced it, explaining to the audience that the title was referring to that sense of discovery that both performer and audience hope to unleash when they interact with live music. With Ezra Furman on Wedneday, it was there in abundance