Artists 4 Israel's infamous Pinocchio statue was present at the protest, holding a sign that read "Roger Waters: We don't need your lies about Israel.''

ROGER WATERS performs at Staples Center in Los Angeles in June.
(photo credit: REUTERS)
Advertisement
While legal efforts to stop musician and anti-Israel activist Roger Waters from performing this weekend have failed, protesters are employing other tactics to counter him around the US and Canada.As Waters appears across North America on his Us + Them tour, the former Pink Floyd front man is being met by counter-programming looking to respond to his rabid attacks on Israel. Waters has called the Jewish state an apartheid state, compared its government to Nazi Germany and said it was a worse regime than the one in Syria.Outside Waters’s concerts in New Jersey and Brooklyn in the past week, the organization StandWithUs stood next to a 4-meter blow-up doll of Pinocchio created by Artists 4 Israel, StandWithUs members were holding signs reading “Roger Waters: We don’t need your lies about Israel.” The doll was accompanied by a truck emblazoned with a digital billboard and graffiti artists painting T-shirts for passersby, another contribution by Artists 4 Israel. 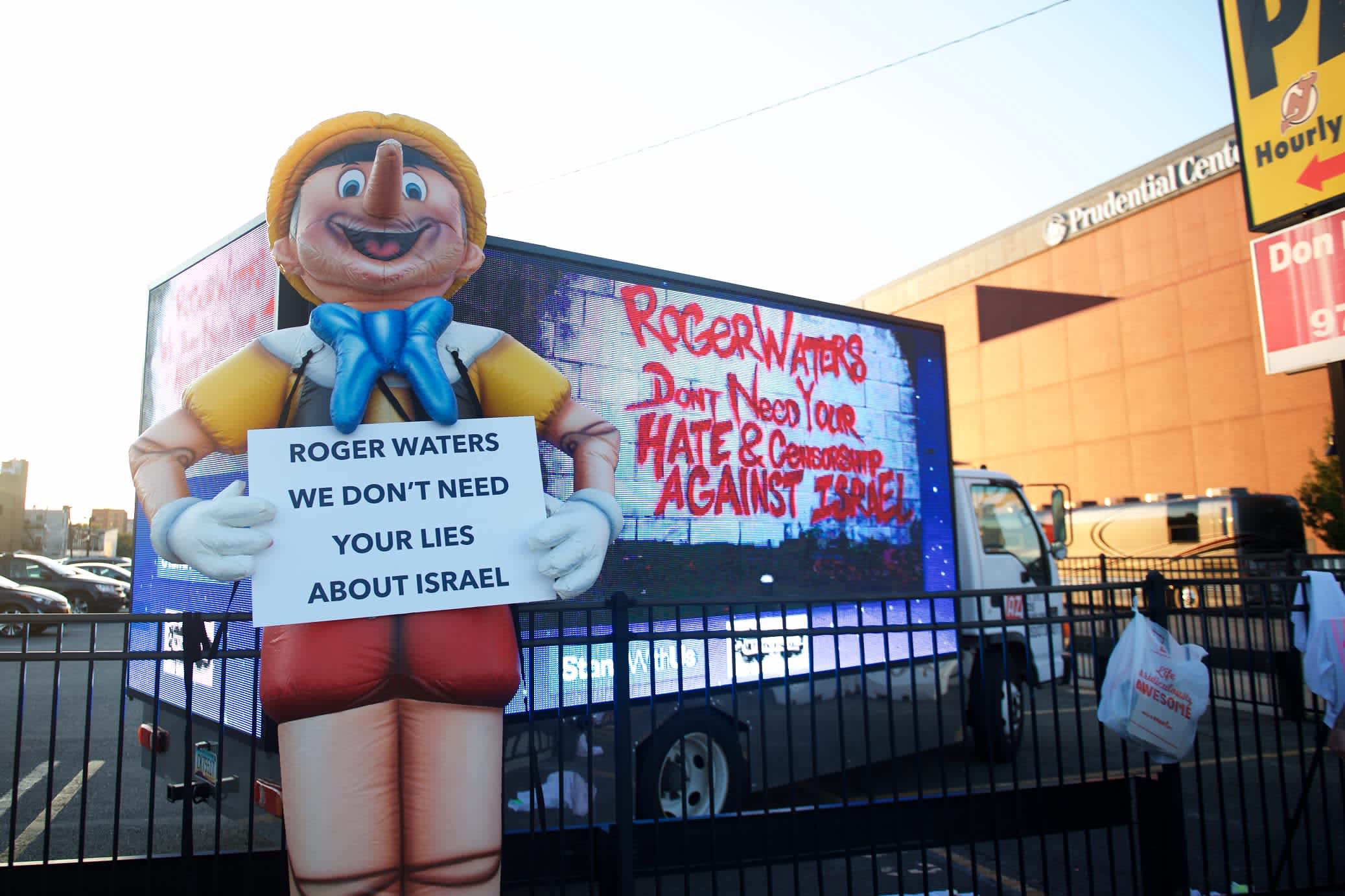 Protesting against Roger Waters in Newark (Credit: PERRY BINDELGLASS)
StandWithUs intends to bring its protest to Waters’s upcoming shows on the US East Coast, including in Hartford, Connecticut, and Boston, Massachusetts.This weekend – on Friday and Saturday nights – Waters held two shows in Long Island at the Nassau Coliseum, despite legal efforts to prevent the performances. In July, Nassau County Attorney Carnell Foskey threatened to take legal action against the Nassau Events Center in light of the county’s anti-BDS law. The law precludes companies that have participated in BDS activities from doing business with the county, which owns the arena.But last week, according to Newsday, Foskey said the county would not be taking legal action to prevent the concerts from going forward.“After extensive legal review, we had already determined that factual issues and a lack of legal precedent have precluded success if the county were to litigate,” he said in a statement.StandWithUs did not appear outside the Long Island shows, as they took place on Shabbat.A group of lawmakers, students and activists – headed by Hempstead Councilman Bruce Blakeman – did stage a protest outside the Nassau Coliseum on Friday afternoon. The groups held signs supporting Israel and chanted slogans including “Say no to the show” and “Stop the lies, stop the hate.”In an op-ed in The New York Times last week, Waters decried an anti-BDS bill currently being considered by Congress as “draconian” and “McCarthyite.”“All Americans – regardless of their views on Israel-Palestine,” the Englishman wrote, “should understand that potentially targeting and blacklisting fellow citizens who support Palestinian rights could turn out to be the thin end of a thick authoritarian wedge.”When Waters departs the US for Canada in October, he’ll encounter a very different type of protest – screenings of a movie by filmmaker Ian Halperin. The film, called Wish You Weren’t Here, details Waters’s crusade against Israel against the backdrop of contemporary antisemitism. Halperin told The Jerusalem Post in July that he “interviewed musicians who have worked with him [Waters] over the years and – this was alarming – they claim that he’s been anti-Jewish for more than 25 years... This man obviously has an agenda.” Halperin also spoke with figures including Jewish Agency Chairman Natan Sharansky, World Jewish Congress president Ronald Lauder and Harvard law professor Alan Dershowitz.Waters will be playing shows in Toronto on October 2 and 3, Quebec City on October 6 and 7, Ottawa on October 10, Montreal on October 16 and 17, Winnipeg on the 22nd and Edmonton the 24th and 25th. B’nai Brith Canada will host screenings of the film in Toronto on October 2, Quebec on October 7 and 8, Ottawa on the 10th, Montreal on the 16th, Winnipeg on the 22nd and Edmonton on the 25th.Halperin told the Post on Thursday that he had just screened the film at the Vatican, in part because the pope appears in the movie. After its premiere in Canada, there are screenings planned across the US, and “an Israel premiere will be announced soon,” Halperin said.