Why Radiohead is more important than Roger Waters

Radiohead’s return to Israel is a significant event on many levels. 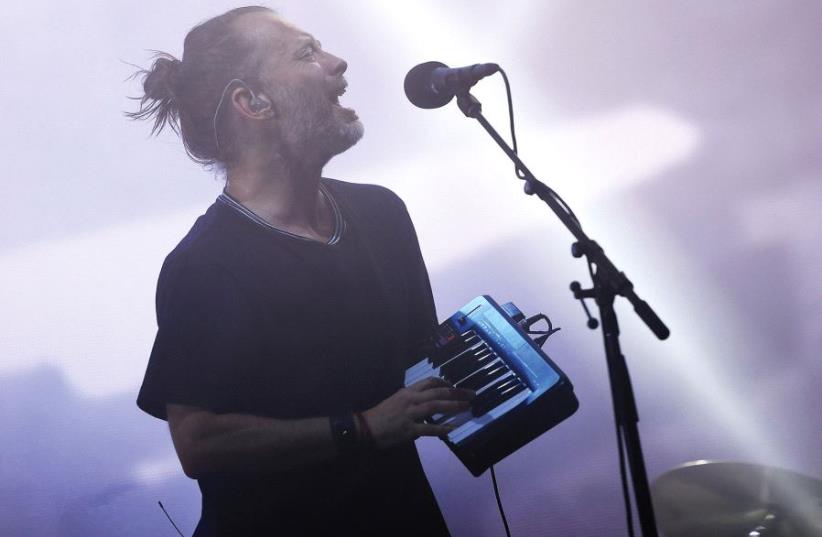 Radiohead performs at the Glastonbury Festival 2017
(photo credit: REUTERS)
Advertisement
Next week’s Radiohead concert in Tel Aviv was a huge deal even before Roger Waters opened his mouth.Although the British band has performed in Israel thrice previously – as young punk-tinged upstarts in 1993 soon after the release of their debut album Pablo Honey with its snotty sing-along single “Creep,” in 1995 opening up for REM at Ramat Gan stadium following the release of their sophomore effort The Bends and in 2000 as headliners at Caesarea – their July 19th show at Park Yarkon is their first as the “world’s most important” band.Not most important in terms of sales or commercial appeal, but important in influence, artistic integrity and political correctness. In essence, nobody is cooler than Radiohead. Their uncompromising attitude, obliviousness to trends, pop conventions and hair stylists, and an endless experimental spirit have set them apart from just about any of their peers in the rock world.A Radiohead show is the antithesis of a whoo-whoo good-time rock concert full of pumping fists and “Hello Clevelands!” While front man Thom Yorke is one of the most enthralling figures onstage today, with emotive otherworldly gyrations and expressions, Radiohead are not necessarily entertainers – they’re artists using music as a palette. Which can be challenging for an audience – especially an Israeli audience, which generally goes to hear the hits and twiddles their thumbs for anything else. Will they react kindly to a half-hour of bleeps and buzzes amid Yorke’s yodel moans while waiting for their favorite tune from OK Computer? That 1997 monumental career peak – their own Sgt. Pepper and Dark Side of the Moon – propelled Radiohead to worldwide stardom and set them apart from the mid- 90s Britpop guitar pack of Oasis, Blur and Pulp.OK Computer’s 20th anniversary re-release last month, complete with previously unreleased bonus tracks that caused wonder why they weren’t included in the original, reaffirms the album as one of the greats of the rock era.But beginning with its 2000 follow up, the dense, electro-heavy Kid A, and on through last year’s A Moon Shaped Pool, Radiohead has thrown themselves headfirst into a brave new world of songs that are often without discernible words, choruses or easy-to-remember melodies, but still evoking mood, feeling and emotion.Each album has what one reviewer calls “elusive charms,” but Grammy Awards and gold records aside, the band’s direction moved not to the side of the road, but to a field across the way. The fact that they still headline prestigious festivals and sell out stadium shows makes their career trajectory even more remarkable and bodes well for the remaining free thinkers out there who don’t need their music as palatable as a fruit smoothie.So, if Yorke and friends deem it acceptable to play in Israel, the significance of that decision has much more far-reaching implication than dozens of shows by Britney Spears, Guns & Roses, Aerosmith and hosts of other finely tuned greatest hits legacy acts ever could.Which brings us back to Roger Waters, who sent Yorke an email earlier this year expressing concern “about Radiohead crossing the BDS picket line to perform in Israel.”The letter prompted a tirade from Yorke published in Rolling Stone, which turned out to be the best hasbara Israel has received lately, excluding Gal Gadot’s stint as Wonder Woman.Saying that there are many people who don’t agree with the BDS movement, Yorke told the magazine that “It’s really upsetting that artists I respect think we are not capable of making a moral decision ourselves after all these years. They talk down to us and I just find it mind-boggling that they think they have the right to do that. It’s extraordinary.”Yorke endeared himself further to those who prefer dialogue to boycott during last week’s Radiohead performance at the TRNSMT Festival in Scotland. Several Palestinian flags and signs calling on the band to boycott Israel were held aloft, prompting Yorke to mumble into his microphone “some f**** people” a few times, and to give his middle finger to the protesters.Besides helping to propel the band’s career by giving endless airplay to their first single, “Creep,” Radiohead has other reasons to feel affinity for Israel. Guitarist Johnny Greenwood is married to an Israel woman, Sharona Katan, and Greenwood collaborated with Israeli musician Shye Ben Tzur on a 2015 album called Junun, recorded in India with a group called the Rajasthan Express.Greenwood will be busy on Wednesday night when he joins Ben Tzur as Radiohead’s opening act. Their set will be preceded by another multi-centric performance, by Jewish and Arab musicians under the banner Dudu Tassa and the Kuwaitis, who have opened up some Radiohead shows internationally this year, including the Coachella festival.Rather than succumbing to boycott pressure, Radiohead via their words and actions appear to be issuing a call for inclusion and using music as the unifier. It’s no less than one would expect from the world’s most important band.