“Seafood has always been my passion.” 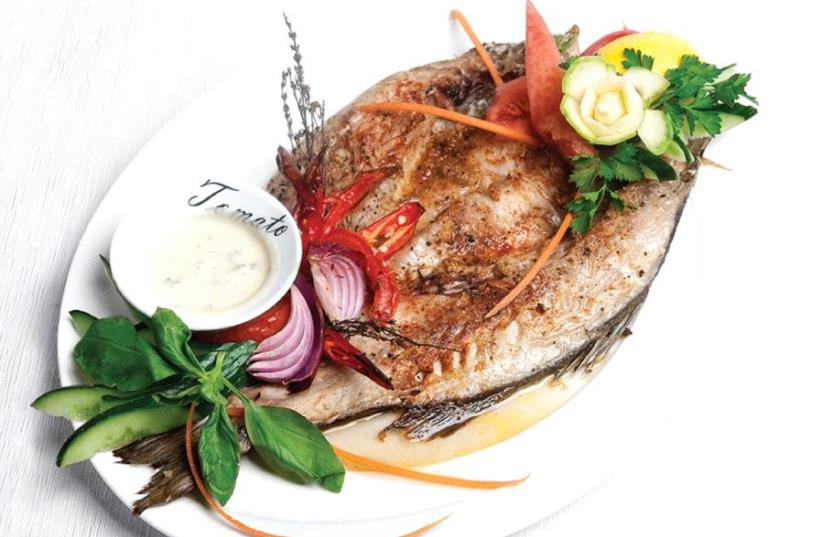 Abrage restaurant
(photo credit: PR)
Advertisement
Perched above the decorative fountain in Kedumim Square – the centerpiece of restored Old Jaffa – is Abrage, which promises a “Mediterranean food experience.” The restaurant’s large al fresco area, partially enclosed in the winter, flanks the fountain. However, it is once inside Abrage (the Arabic word for “signs of the zodiac,” in acknowledgment of the names of Old Jaffa’s alleyways) that the experience commences, as tantalizing aromas waft from the kitchen.Zodiac names have also been bestowed on Abrage’s specialty cocktails, which comprise some originals, some classics and some reinvented classics. The Aries Strawberry Sangria (NIS 38) – Aperol, strawberry, lemon, mint and white wine – was a cross between a cocktail and the wine beverage, while the Sagittarius Caipirinha (NIS 34) – cachaça, brown sugar and lemon – was a particularly citrusy version of the Brazilian cocktail. Both were exceedingly sweet, yet refreshing.A meal at Abrage begins with an array of mezze, served with excellent homemade bread. Noteworthy among these small plates were a North African carrot salad, creamy hummus with a bit of a kick, assorted pickled vegetables, and a cold Asian noodle salad with a house dressing.According to Abrage owner Moty Strokovsy, “Seafood has always been my passion.”Strokovsky personally oversees the restaurant’s daily selection of fish and seafood, acquired from a premium supplier. It was only natural, therefore, that both our appetizer and main course choices came from the sea.We started with the Classic Shrimp (NIS 45) in butter, garlic confit and olive oil. The menu did not mention lemon, but it was definitely noticeable.The fresh, juicy shrimp were fingerlicking good.The Sea Fish Ceviche (NIS 49) featured the catch of the day – tiny cubes of fresh fish marinated in lemon and combined with thinly sliced red pepper and red onion. The crisp vegetables added more crunch than is usual for ceviche, but this was no drawback. Overall, the version here was a very pleasant one.One of Abrage’s most popular dishes is the Crispy Calamari (NIS 54), a generous portion of breaded calamari rings, with a few heads thrown in for good measure. Served with a very tangy, liquidy tzatziki, the morsels of squid were not particularly crisp but were still quite satisfactory.The Seafood Hot Pan (NIS 180) is one of the restaurant’s flagship dishes: calamari, shrimp, mussels, scallops on the shell and blue crabs, in a sauce of olive oil, garlic, lemon, white wine and parsley. The stars of this dish were once again the shrimp, along with the meaty crab, all swimming in a sauce that begged to be mopped up with the thirsty house bread.The Whole Baked Fish (price varies, starting at NIS 99) offers the fresh catch of the day – striped bass, on the day we visited – baked in the chef’s spice mix. The presentation was truly impressive: a butterflied fillet that covered a large plate, with a topping that resembled bread crumbs but was actually browned garlic.Unfortunately, the taste did not live up to its appearance, although fans of garlic would find some compensation.The fish was garnished with grilled vegetables and, like all the main courses (meat and poultry options are available), came with a tossed salad and a choice of warm side dishes.Recommended among the sides is the beet purée, a creative dish that combines the flavor of the root vegetable with the consistency of mashed potatoes.Desserts at Abrage reflect both Western and Middle Eastern influences. The Crema Catalana (NIS 38) was a particularly rich, amber version of a crême brulée with a distinctly French vanilla flavor. It was accompanied by a sweet sauce derived from frozen blueberries that did little to enhance the main event.As befits a restaurant located in Jaffa, knafeh (NIS 38) was also on the menu. The Abrage version was characterized by a heavy hand with the syrup, and interestingly, was served with a scoop of vanilla ice cream.The writer was a guest of the restaurant.Abrage
Not kosher
6 Kedumim Square, Jaffa
Tel: (03) 524-4445