Taking a Western look at Egypt

A new exhibition at the Israel Museum focuses on ‘The Allure of the Sphinx.’ 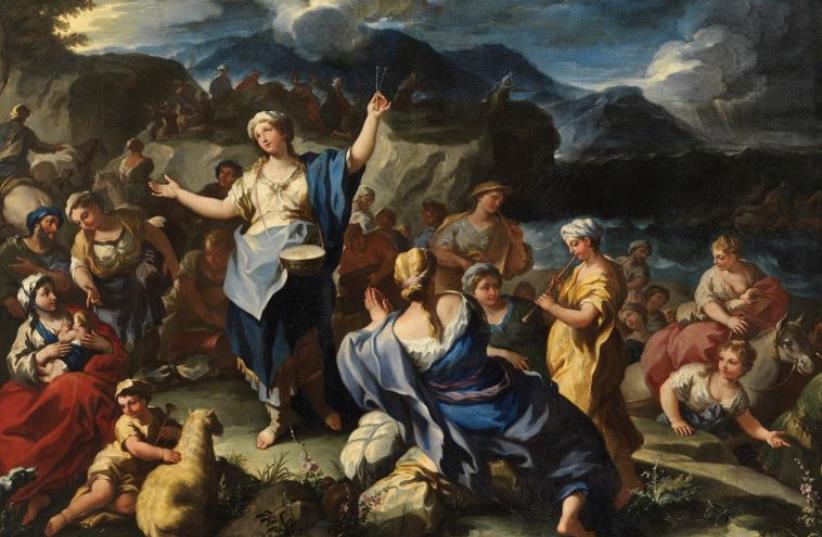 Miriam, Paolo De Matteis (after 1687)
(photo credit: PR)
Advertisement
Egypt appears to be the flavor of the month at the Israel Museum in Jerusalem. A fascinating display of the results of second millennium BCE Egyptian-Canaanite synergy opened on March 4, and on the same day an exhibition called “The Allure of the Sphinx: Ancient Egypt in European Art.”And a captivating display it is, too.“The premise for this exhibition comes from the fact that Europeans of the 17th and 18th centuries – that also applies to earlier times but our works relate to this particular period – liked to describe stories connected to Egypt,” explains curator Shlomit Steinberg. “They liked to describe things like Pharaoh’s daughter, Potiphar’s wife, the flight to Egypt of the holy family [from the Gospel of Matthew], and even Cleopatra.”But, great interest notwithstanding, it seems the aforementioned Westerners were not too knowledgeable about the factual backdrop to their impressive and entertaining artwork.“They didn’t really know a lot about Egypt,” Steinberg continues.“The maps they made [of Egypt] were ridiculously funny cartography. The Delta region was very dominant, and all the rest was sort of by the by. They also had all sorts of strange animals, and the pyramids looked like the Azrieli Tower cubes [in Tel Aviv],” she laughs.Amateurish portrayal notwithstanding, Egypt was all the vogue in Europe, even if it was sometimes referenced secondhand.“There was a pyramid at the entrance to ancient Rome. It was 39 meters high and was built in 12 CE by Gaius Cassius, who was some sort of magistrate,” Steinberg notes. “So, when the [later] Europeans wanted to portray Rome, the pyramid was always featured. That was their standard reference for Egypt. Anyone who wanted to describe Egypt had to have a pyramid in there.”This hackneyed mindset was commonplace and is a prominent element in “The Allure of the Sphinx” exhibition. The works include scenes that have no cultural or geographic connection with Egypt, in which the artist has subtly inserted, for example, a pyramid. It seems that the Europeans always needed to have some familiar cozy handle to grab in order to make scenes of an alien culture more palatable. In The Finding of Moses, by early 18th-century painter Nicola Grassi, there is delightful scene based on the biblical event in which Pharaoh’s daughter comes across baby Moses floating on the Nile in a little basket. While the occurrence may come straight from the Torah, it is highly unlikely that the princess popped along for a bath wearing a style of dress that was probably all the rage in Italy at the time. There are also some decidedly unAfrican trees in the painting, not to mention a walled city in the background, with a dome that looks like it has been lifted straight out of a sketch of a mosque or chapel, with the ubiquitous pyramid-shaped structure next to it.There’s more. In another work called The Child Moses Touching the Burning Coals at the Court of Pharaoh, which was painted in the mid-18th century by an unknown artist, once again we find the Egyptian hierarchy decked out in swanky-looking European attire.You could also note the fact that almost all the characters are portrayed with fair skin, including the infant who has to choose between reaching for some nice glinting jewels and steaming hot coals.Hagar, who also came from those climes, features in a couple of items in the exhibition, although not in the most favorable of circumstances.“Here we have Hagar, who was the daughter of Pharaoh but was sent to be Abraham’s maidservant,” says Steinberg. “We see her in all sorts of works, in particular in paintings by Dutch artists. She was an Egyptian princess, but she is always portrayed as a European princess – blonde and beautiful.”The Europeans of the time had a whole legend of symbols designed to enable the layman to quickly and easily identify the so-called cultural context. Hieroglyphics were considered an efficient way of conveying the Egyptian milieu, as was Cleopatra’s needle, and there was the odd cornucopia.“There is a doctorate by a Dutch woman named Christine Petra Sellin, who posits a very interesting idea,” says Steinberg. “She says that during the Dutch Golden Age [which roughly spanned the 17th century] there was suddenly a lot of money around. A lot of traders and other people took maidservants, whom they could use any way they wanted, including sleeping with them. And when the poor woman became pregnant, she and her baby were cast out and had to work as prostitutes. That was a very common occurrence.”Hence, according to Prof. Sellin, the frequent depiction of Hagar as a fair-skinned woman being ousted by Abraham instead, for example, of showing Hagar and Ishmael wandering through the desert.“There were dozens of works by Dutch artists showing that scene,” says Steinberg.Other notable artists of the time who joined in the European centric approach to ancient Egypt and whose works are currently on view at the museum include early 18th-century Scottish painter David Roberts; German artist Johann- Jakob Becker, whose 1817 work goes by the title Portrait of a Woman in a White Dress, Seated in a Chair Decorated with a Sphinx; and late 18th-early 19th-century Dutch artist Reinier Vinkeles, who merrily joined the Hagar dismissal portrayal bandwagon of the day.There are also sketches and paintings and various artifacts in this illuminating and highly entertaining exhibition.‘The Allure of the Sphinx: Ancient Egypt in European Art’ is on display at the Israel Museum, Jerusalem until December 1. For more information: (02) 670-8811; http:// www.imj.org.il