The Liquid Love exhibit comments on finding love in the West

'Liquid Love' refers to the book of the same title by sociologist Zygmunt Bauman.

Children exiting their ballet classes at the Herzliya TEO Arts and Culture Center might notice a powerful charcoal painting depicting a tube-fed human figure as a gentle hand attempts to reach it. Titled The Death of a Son, the powerful work by Maria Saleh Mahameed is included in Liquid Love, a group exhibition being shown until Friday, November 26.

“I spent a lot of time thinking about capitalism,” curator Daria Kaufmann told me, “and I do not spoon-feed my audience.”

The name of the exhibition refers to the same-titled 2003 book by sociologist Zygmunt Bauman. In it, Bauman examines romantic relationships and argues that, in the West, people crave stable relationships but are hard-pressed to attain them due to the larger cultural forces at work.

“All that is solid melts into air,” wrote Karl Marx in the 1848 Communist Manifesto, thinking this process would lead to a future man who will “face with sober senses his real conditions of life, and his relations with his kind.”

Bauman argues we are nowhere near that moment. A similar criticism can be found in the 1997 work Consuming the Romantic Utopia by Eva Illouz.

When I visited, Finding Ophelia by Yinon Gal-On was screened at the large open-air space at the center of TEO. In it, Gal-On allows us to glimpse at a seductive underwater fantastical space which alludes to the 1852 painting Ophelia by John Millais. The talented teenaged artist specializes in underwater photography, such as in his 2020 Bird of Paradise or Noa’s Thoughts. As Gal-On usually works with his friends, it is interesting to wonder how Illouz or Bauman would connect such beautiful photos of young Israelis unable to breathe to our current moment.

TEO serves as a space for visual arts, yet it also hosts a theater, a dancing school, music classes, a social club for people in their 60s and a coffee shop. For days after my visit, I considered art in places of transit such as airports, hotels and office buildings.

In this country, Menashe Kadishman is perhaps the most successful artist viewed in such contexts, as his paintings adorn many offices and lobbies. To select works for such spaces means to seek an aesthetic experience serving many groups. Usually a Trompe l’oeil is picked as a crowd-pleaser. Kadishman’s 1964 Uprise facing the Habima National Theater is one example. 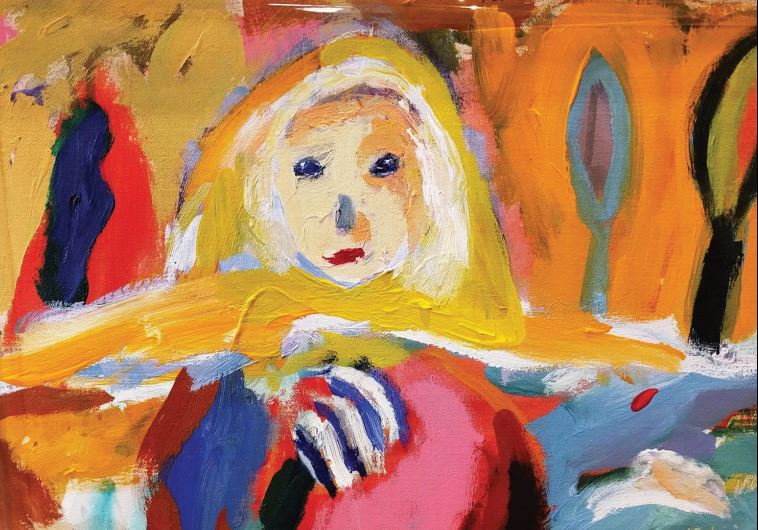 Kaufmann sees it as creating a multi-leveled exhibition where different audiences are served in various ways. Pointing to Thou Shalt Not Kill (Protective Blanket Series) by paper artist Bianca Severijns, she explains that during the COVID-19 lockdowns domestic violence increased. The paper blanket, in this reading, is a labor-intensive craft-like artwork meant to offer protection, perhaps a magical healing object during a pandemic.

The exhibition also presents positive aspects of the individualistic society capitalism enables. Murjan Abu Diba presents a stunning photograph of herself seated in a regal dress with men lying around her. As if, Kaufmann suggests, the tables had turned and modern art bestows this young woman with a strong voice. Something a more traditional society would have shunned.

To my mind, the work evoked the 1926 painting Resting at Noon by Nachum Gutman. Possibly placing it within a new trend, art critic Gideon Ofrat suggested to name the right to reclaim, describing Arab-speaking artists who are in dialog with, and freely borrow elements from, art made by Hebrew-speakers as well as the larger political and social realities around them in our shared liquid modernism.

Liquid Love is being shown at the TEO Arts and Culture Center at 168 Wingate Street, Herzliya. Admission is free. An English-language discussion about the exhibition will be held with Bianca Severijns on Monday (October 25) at 11 a.m.