The She She Pop troupe from Germany perform their play ‘The Rite of Spring.’ 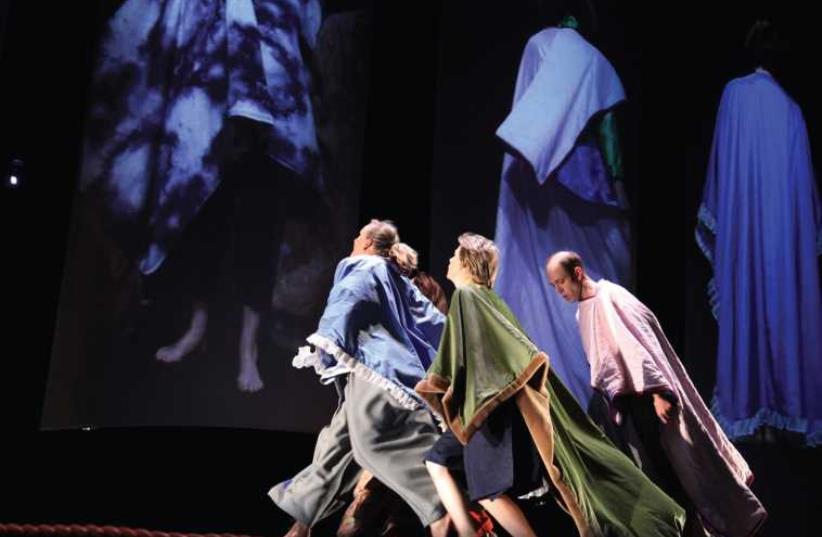 The She She Pop troupe
(photo credit: DORO TUCH)
Advertisement
There are quite a few items in this year’s Israel Festival lineup that tend towards the more challenging or at least the more surprising side of the artistic tracks. But the play The Rite of Spring, which will be performed by the She She Pop troupe from Germany, takes the unpredictability element several steps further.What could be more antithetical to the classic figure of the Polish Jewish mother than offspring berating their parent for making what the kids believe to be unjustifiable sacrifices? That, in essence, is what The Rite of Spring is about.The name of the play comes from the composition by Stravinsky, which forms the sonic backdrop for the onstage action that centers around four actors who interact with images of their own respective mothers projected onto giant cloth screens.The work expresses a wide spectrum of emotions and sensibilities, as parent and adult child engage in a touching, honest and humorous ping pong, while the sacrificial theme of Stravinsky’s masterpiece unfurls in typically dramatic fashion.The company members include Sebastian Bark, who also serves as director, while his mother, Cornelia, is on stage in video form only.Considering the accusatory nature of the script, it is quite surprising that the mothers agreed to cooperate and to be shown up for their maternal actions which, one presumes, they took in good faith and with the best of altruistic intentions. Bark says it was indeed a bit hard going to begin with.“The first thing our mothers said was that they might consider [doing the show] but would never talk about themselves as victims or making sacrifices. They were really reluctant to enter that sphere,” he says.Interestingly, the word for victim in German – opfer – also means “sacrifice.”Fair enough. It must be hard for any parent to deal with their offspring’s gripes about their level of parental functioning – as many know only too well – and it must be something of a double whammy to have to apologize for having done “too much” to help your kids.It seems that demographics and cultural background also play a part in the intergenerational equation.“In our [German] society, it is a problem to be a victim or to sacrifice too much,” says Bark. “It seems to be different in different cultures. In the 1960s and ‘70s there were families that were very much aware of living in a patriarchal society, but today no one wants to hear about that anymore. They want to see themselves as strong.”That evoked a reaction from the next generation.“We started complaining,” says Bark. “We turned it around. Our work is about us trying to get rid of [troubling] images in our heads and in our hearts.”Bark and his cohorts actually have a track record in putting their parents on the spot. Five years ago they put together a production based on Shakespeare’s King Lear, which was about passing the mantle of power down from fathers to sons.“It was about authority,” Bark recalls. “We then thought about asking our mothers to do something together with us. Then we got the idea of doing something on sacrifice as a topic, and it was very hard for us to talk about such things, even among ourselves [offspring], let alone with our mothers. But we thought we’d try.”That’s far easier said than done, and Bark et al got down to trying to work out the dynamics: what sort of production it might turn out to be and to how to approach their mothers about it and to get them fully on board.“We thought it could be interesting to make a sort of ritual with images,” says the show director. “It was a very formal approach. We first had formal ideas, and then we realized that it could be possible to try to not talk. The music really helped with that.”That would also help to circumvent some of the stickier issues and possibly lure the mothers into the thick of the evolving project and gain their full cooperation. The Rite of Spring eventually crystallized into a verbal and non-verbal hybrid, with two of the four parts devoid of speech.There is plenty of contrapuntal interplay throughout the performance, although that proved to be a complex issue, too.“We don’t talk with each other,” says Bark. “We have our own voices and those of our mothers set against each other in order to say that this has all been said [before], it is something that is being said all the time. It is a very ritualistic way of dealing with language.”The counterplay was, naturally, one of the more difficult elements of the work to devise and perfect.How do you manage to have four actors performing live on stage and feeding off and reacting to giantsized video images and convey a sense of completely live action that is taking place in front of the audience’s eyes for the first time? “We try to interact with the images, and we also try to fight the image and physically dealing with the screen – twisting it and changing its shape,” he says.It sounds like parent and child went through the wringer to get The Rite of Spring up and running. It also brought the two generations closer together, clashes notwithstanding.“It was a bit difficult for my mother to take orders from me during the rehearsals,” Bark admits. “I was the director and I was in charge, but we managed to get over that, too.”And it’s not all about power play.“There is a lot of humor in the work,” says Bark. “Life can be difficult, but it is not heavy all the time. And are mothers are funny, too.”The Rite of Spring performances will take place with the support of the Goethe-Institut, Israel, and as part of the events marking the 50th anniversary of Israeli-German diplomatic relations.

The Rite of Spring will be performed on June 8 and 9 at 9 p.m. at the Jerusalem Theater. For tickets and more information: http://israelfestival.org/en/