Don't miss the Jerusalem Post's top ten things to do for the coming week. 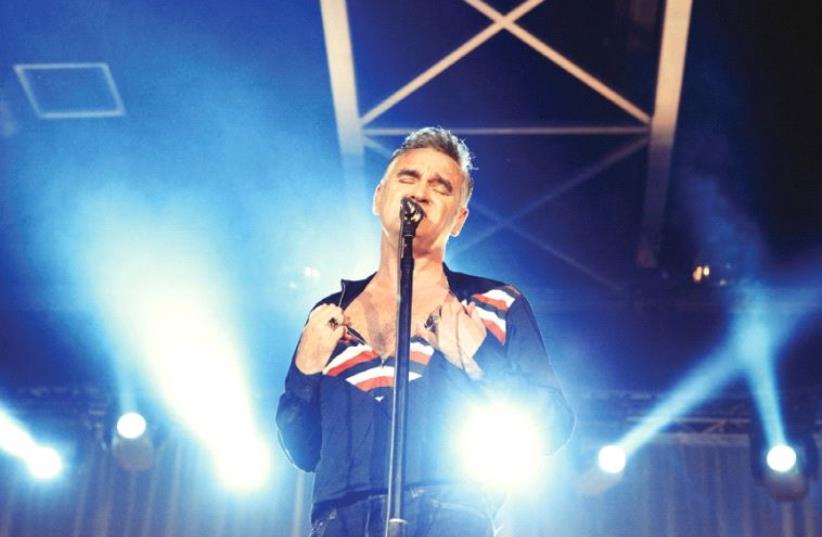 Morrissey
(photo credit: PR)
Advertisement
1. SYMPATHIZE WITH THE VILLAINSIn the new film Hell or High Water, two brothers – one a straitlaced divorced father trying to make a better life for his son, and the other a short-tempered ex-con with a loose trigger finger – plan to rob branch after branch of the bank that is foreclosing on their family land. Vengeance seems to be theirs until they find themselves in the cross-hairs of a relentless, foulmouthed Texas Ranger looking for one last victory before his retirement. With Chris Pine, Ben Foster, Jeff Bridges.2. CHILL WITH JEWISH SOUL MUSICThe 29th International Klezmer Festival takes place in Safed this week, offering numerous unique musical performances of local and international klezmer musicians.Stages are set up in the old historical alleys of Safed, which lend a special atmosphere to the festival.In addition to the many free performances, there are activities such as a stage for Klezmerim for Kids, tours and workshops in the spirit of the Kabbala.August 15 to 17. For more information, go to http:// www.klezmerf.com 3. ATTEND THE WEDDINGAn intimate and fresh production of one of the most beloved comic operas, Mozart’s The Marriage of Figaro, will be performed in the framework of the International Opera Workshop at the Israel Conservatory Tel Aviv.Conducted by Ari Teperberg, with bass-baritone Robson Tavares as Figaro and an international cast of solo singers.August 15 at 8:30 p.m., Israel Conservatory of Music, 25 Louis Marshall Street, Tel Aviv. (03) 546-6228.4. TAKE IN THE GARBAGE Alternative rock band Garbage perform as part of the launch tour of their new album Strange Little Birds.The American-Scottish group arrive with their original lineup: Duke Erikson on bass, guitar and keyboards; Steve Marker on guitar and keyboards; Scottish vocalist Shirley Manson; and Butch Vig on drums and percussion. They will play many of their hits from the 1990s, as well as songs from their new album.August 16 at 7 p.m., Zappa Amphi Shuni, Binyamina5. WELCOME BACK MORRISSEYMorrissey is returning to Tel Aviv for two concerts.Morrissey was the lead singer of 1980s group The Smiths. After the group broke up, he has had a successful solo career for the past 25 years. He performed in Israel in 2008 and 2012 and this year will return on the 30th anniversary of the release of the Smiths’ cult album The Queen Is Dead.August 22, Heichal Hatarbut, Tel Aviv; August 24, Caesarea Amphitheater. Tickets: *9066; www.eventim.co.il out & about highlights dining events movies television 10 6. SEEK OUT THE SEARCHERSThe British band The Searchers will perform two concerts next week. Formed in Liverpool at the end of the 1950s, the band emerged in the 1960s as a highlight of the British pop music scene. The Searchers are currently touring Europe, performing their greatest hits.August 19, Haifa Auditorium; August 20, Heichal Hatarbut, Tel Aviv 7. TAKE A TOUR OF SPANISH DANCE“The memory of yesterday makes us live today for the success of tomorrow.” That is the motto of The Sins of Passage, (El Callejón de los Pecados), the flamenco performance of Spanish dancer and choreographer Eduardo Guerrero, featured as part of the Tel Aviv Dance Festival. Guerrero’s rich and exciting choreography combines traditional and modern flamenco. The Sins of Passage is a dramatic, thrilling and sensational show.August 18 at 9 p.m. and August 19 at 2 p.m., Suzanne Dellal Center, Tel Aviv8. SHOP ‘TIL YOU DROPHutzot Hayotzer, the largest arts and crafts fair in Jerusalem, features paintings, jewelry, ceramics, Judaica and much more by artists from Israel and abroad. In addition to nightly concerts by Israel’s top musicians, there is a beer garden, food fair and activities for children.August 15 to 27, weeknights from 6 p.m., Sultan’s Pool, Jerusalem 9. LOOK FOR ROOTS“Hatalush” (The Rootless Character), a new group exhibition at the Tel Aviv Museum of Art, focuses on the itinerant character, which first appeared in Hebrew literature a century ago and still frequents it today. The featured works, mostly by young Israeli artists, unfold in the light of this literary figure whose chronicles and contours encapsulated and formulated the topical issues of its time.Until November, Tel Aviv Museum of Art, Herta Amir Building 10. JOIN THE TREASURE HUNTJames Purefoy (The Following), Michael Kenneth Williams (The Wire) and Christina Hendricks (Mad Men) star in Hap and Leonard, a six-episode TV series based on the novels by Joe R. Lansdale. Down on his luck after losing his job, 1960s activist/ex-con Hap Collins listens to his former wife, Trudy, who resurfaces with promises of finding a sunken treasure. Joining the adventure is Hap’s unlikely buddy Leonard Pine, an openly gay black Vietnam vet with a bad temper. Soon enough, the simple get-rich-quick scheme snowballs into gory mayhem.Wednesdays at 10 p.m. on AMC and HOT VOD