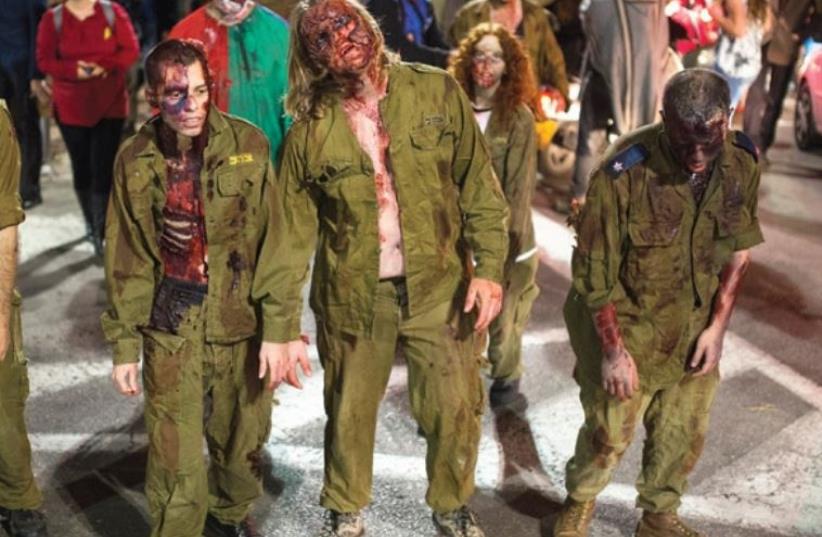 2. PURIM: JAPAN IN JERUSALEM Harucon is an annual Israeli anime and manga convention held every Purim in Jerusalem. It features activities and events such as lectures, workshops, panels, booths by vendors and artists, movie screenings and original musicals. Among the top attractions is the “cosplay” competition, which is very diverse and colorful due to the convention’s coinciding with Purim.Today, 10 a.m. to 7 p.m., International Convention Center. Info: http://2016.harucon.org.il 3. PURIM: THE WALKING DEAD Join the undead as they prowl the streets of Tel Aviv. The annual Tel Aviv Zombie Walk has become a Purim institution, with the number of zombie participants rising every year. So get ready to witness some undead knights, demons, brides, clowns, fairytale characters, and even some rather rabid IDF soldiers.

Tomorrow at 9 p.m. Gathering point: corner of King George St. and Ben-Zion Blvd., Tel Aviv.4. KIDS: YOU AND THE TUBEYouMake, ReMake is a unique interdisciplinary show for children, which consists of staged responses to YouTube clips. The concept, created by Renana Raz, is an encounter between two worlds: digital media and the stage. During the show, the audience gets to see both the reaction – the Remake – and the original YouTube video in either order and sometimes simultaneously.Tomorrow, 11. a.m., Tel Aviv Museum of Art. Info: www.tamuseum.org.il 5. FESTIVAL: HOLY CITY SOUNDS Experience music from Jewish, Christian, Armenian and Arab sources, all represented at Jerusalem’s Sounds of the Old City Festival. Musicians play a sampling of Jerusalem’s endemic music in various venues in all four quarters of the Old City, giving listeners a feel for Jerusalem’s 3,000-year-old history within the Old City’s intricate passages and open courtyards.The festival consists of solo and group performances, as well as multimedia screenings. Free.

Monday through next Thursday. Info: http://en.sounds-of-jerusalem.org.il 6. MUSIC: WELCOME TO THE NORM Chris Norman, legendary frontman of the British rock band Smokie, will perform his greatest hits, as well as songs from his latest album, Crossover. Throughout the 1970s and into the 1980s, Norman and Smokie dominated the charts, with global hits such as “Living Next Door to Alice” and “Needles and Pins.” Norman embarked on a successful solo career in 1986 with the hit “Midnight Lady.”Tuesday, 8:30 p.m., Haifa Congress Center. Wednesday, 8:30 p.m., Mann Auditorium, Tel Aviv. Tickets: http://showtickets.co.il7. MUSIC: MOSH’S WORLD BEAT Local ethno-rock star Mosh Ben-Ari will perform his own mix of soul, rock and reggae in celebration of Purim. The dreadlocked singer will perform many of his hits, as well as his new single “Flower,” which is part of a new album due out in July.

9. ART: A RUSSIAN ROUND-UPA new exhibition at the Tel Aviv Museum of Art examines trends and development of portrait painting among Russian- and USSR-born artists of the past 120 years. It includes several generations of artists of the Realist, Romantic, Social- Realist, Avant-garde, Cubist and Expressionist schools; artists who lived and worked in Russia (Ilya Repin); artists who moved to Paris and other places (Alexander Archipenko, Marc Chagall); and artists who immigrated to Israel (Joseph Constant, Chaim Gliksberg).

Until June 5. Info: www.tamuseum.org.il 10. THEATER: GLOBE-TROTTING ‘HAMLET’ The Shakespeare Globe Theater is bringing Hamlet to Israel as part of its world tour to 160 countries. In celebration of the 450th anniversary of Shakespeare’s birth, Globe to Globe Hamlet revives the Elizabethan touring theater, using a simple backdrop inspired by the past and 12 traveling actors recreating all the vitality of the early theater.