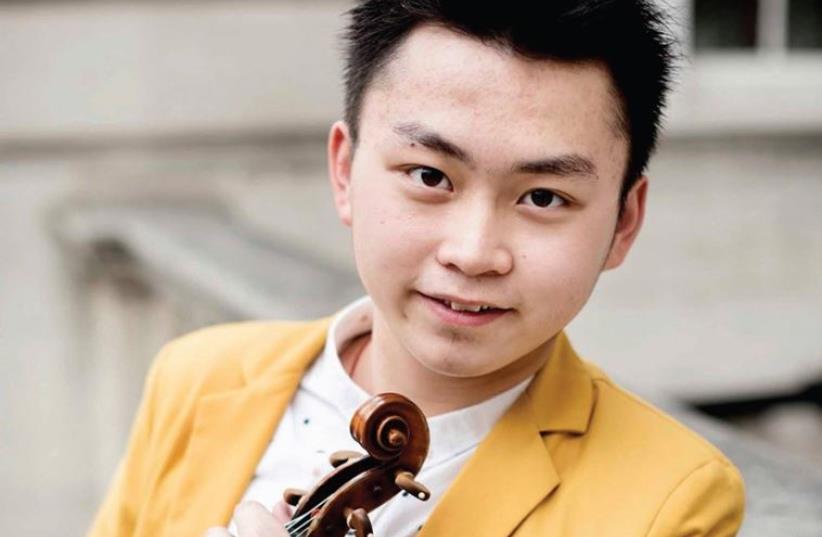 Chinese violinist Ziyu He
(photo credit: Courtesy)
Advertisement
The Keshet Eilon International Violin and String Mastercourse for violin and string instruments takes place between July 24 and August 11. This year, the leading string-instrument summer master course in Israel celebrates 26 years of its founding.Young string instrumentalists from all parts of the world will arrive at Kibbutz Eilon to be instructed by leading musicians and will perform in a variety of concerts that are open to the public.Two themes will stand out. First is the influence of late violinist Yehudi Menuhin in the “Golden Age” of violin performance, marking 100 years since his birth, including the screening of a new BBC documentary about him. The other is Spanish, flamenco and Ladino music in an homage to Israel’s fifth president, the late Yitzhak Navon, who helped revive the Judeo-Spanish culture.The course program features individual lessons, master classes, concerts of students and teachers, as well as the gala concert at the Opera House in Tel Aviv on August 3. Most of the activities are open to the public, usually for a nominal fee.Last summer at the Keshet Eilon master course, 16-year-old Chinese violinist Ziyu He was everybody’s darling. This year, he returns to the master course in a new capacity – as the winner of the prestigious Menuhin Competition, which took place in London several months ago.In an interview from Saltzburg, where he is studying at the renowned Mozarteum University, Ziyu talks about music in his life and his expectations.Born in Qingdao, China, he says, “I was born into a regular family: my mother was a kindergarten teacher, and my father is a administrator. Nobody plays music in my family.”At the age of four, he saw an orchestral concert on TV and “thought that violin is so interesting and it must be my instrument.” A year later, he began learning to play violin with Prof. Xiangrong Zhang in Qingdao.“When I started playing violin, I realized it would accompany me my whole life,” he says.Ziyu was 11 when he started to study with Prof. Paul Roczek at Mozarteum.“My first teacher was my uncle, who is also my sponsor. His daughter, who is a teacher at China’s Music Conservatory, knew Prof. Paul Roczek. I played for him in Beijing, then I passed the entrance exam for Mozarteum, and since October 2011 I and my mother have been living in Salzburg. I love Salzburg because in this beautiful city music is everywhere; it is in the air,” he says.Asked if he sees himself as a child prodigy, Ziyu says, “No, I am not a wunderkind. I need to learn more and more. Music has no end. I just did what I could and what I always wanted to do. I believe that if you love music, music will love you back. I’m always thankful to my family, my teacher, my sponsor and many people who helped me.”As for the Menuhin Competition, Ziyu says he never thought he would emerge as the first-prize winner.“My expectations were to play my music for the audience and to enjoy it, to learn a few good things from other competitors, to make more friends and to see the famous city of London. The competition was not really difficult; it was like playing just another recital,” he recounts.Recalling last summer’s Keshet Eilon experience, Ziyu says, “It is amazing there. There are concerts every day, and you can play in every concert, I played 10 times! The best professors come there, and they give master classes. I also met the renowned violinist Ivry Gitlis, and that was very inspiring. And, of course, I made many new friends. Last year I studied with Shmuel Ashkenasi and Petru Munteanu, from whom I learned many important ideas. And this year I will study with Ani Schnarch and Vadim Gluzman.”To order tickets for the gala concert on August 3 at the Opera House in Tel Aviv, call Sahar at 052-869-8766. To order tickets for the concerts at Keshet Eilon, call (04) 985- 8131; (04) 985-8191; or visit www.keshetei.org.il.