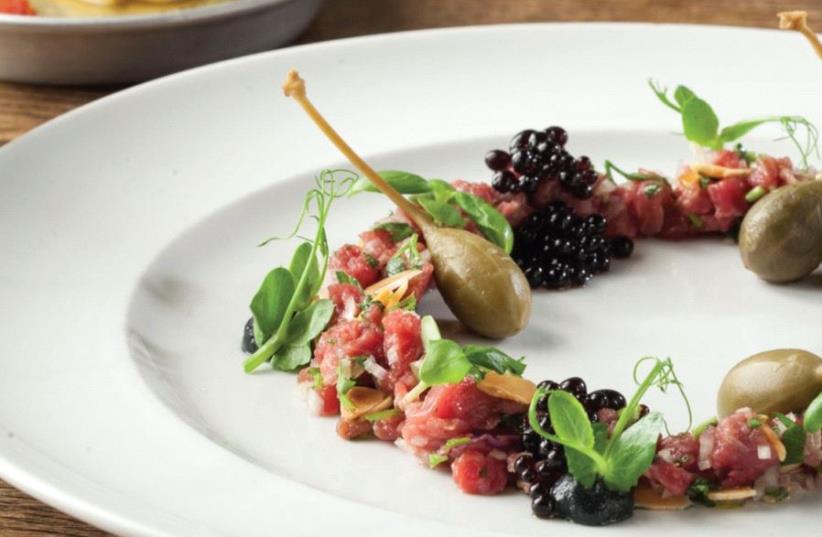 Meat Kitchen
(photo credit: PR)
Advertisement
Meat Kitchen is a relatively new restaurant in Tel Aviv, with a rich history. Paradoxical, but true. In its previous iteration it was the venerable Shine and Sharp steakhouse, catering to full houses on Friday nights. The owners then decided to make the place kosher, changing the name to Meat Kitchen, while maintaining the same dedication to serving only the finest quality meat from the country’s most exclusive suppliers.In terms of décor, the transformation has been minimal. Meat Kitchen is very large, with a handsome bar, comfortable leather seats, an area of al fresco seating and a sizable separate room for private events. Behind the bar is an impressive view of sides of beef aging. According to restaurant manager Koby, Meat Kitchen applies a layer of goose fat to its premium cuts of beef, and then ages them in-house for at least 31 days.It did not take Meat Kitchen long to attract a new following or to start innovating. A few months after opening, it inaugurated Big Sunday, with a special burger menu at reduced prices. Now Big Sunday has given way to Wine and Dine Tuesday – a special tasting menu for two, priced at NIS 430.The Wine and Dine menu comprises five courses, each of which is paired with a glass of wine or other alcoholic beverage. Most of the courses are taken from the regular menu, which is bilingual and easy to cross-reference in English. The Wine and Dine menu rotates monthly.In honor of the occasion, I invited wine writer David Rhodes of the “Drink Israel” Facebook page to be my knowledgeable companion.“The wines on the pairing menu are curated from respectable Israeli boutique wineries,” Rhodes pronounced.There was also a balanced selection of white, rosé and red wines.On the evening of our visit, the appetizer was a special of the night, paired with a cocktail from the restaurant’s list of five specialty cocktails. It turned out to be a “trial size” – just enough to get a taste of the Tokyo Mexico Cocktail: tequila, pineapple juice, ginger ale and lemongrass, an inventive and refreshing summer drink.The appetizer itself was smoked moulard breast, with pineapple, coriander, mint, jalapeno and radish, in a soy ginger vinaigrette.One bite of those morsels of duck was enough to convince us that the restaurant excelled at other meats besides beef.The second appetizer was seared sirloin in a beef and mustard bouillon, with Jerusalem artichoke cream, sweet potato tortellini, portobello confit and hazelnut croquant. There was a lot going on in this dish, adding up to a terrific interplay of flavors and textures; the inclusion of pralined nuts was especially inspired.Rather surprisingly, the steak was paired with a Chardonnay.The white wine was served in stemless glassware rather than the usual wine glass. The amount was also less than a standard glass of wine; Rhodes estimated it was about two-fifths of a normal serving.The pasta course had a quirky name: pasta “tatters” – torn ribbons of pappardelle, with slowcooked shredded lamb and root vegetable cream. The savory lamb ragout was exceedingly rich, transforming the simple pasta into an outstanding dish.The pasta was paired with a crisp and cool rosé from Psagot.The main course was filet mignon, served with mashed potatoes, porcini cream and a distinctive beef and amarena cherries stock. The filets were halfsize versions of Meat Kitchen’s 250-gram portions, but they had all the succulent flavor of the fullsized medallion of choice, tender beef.The filet was paired with a robust Cabernet-Merlot blend from Ella Valley.The dessert was another Wine and Dine menu special: Granny Smith apple cannelloni filled with vanilla pecan mousse, in pineapple soup, with lemongrass apple sorbet and a strawberry macaroon. This dessert was truly creative: The cannelloni shell was fashioned from Granny Smith apple leather, while the sweet mousse filling was remarkable for a parve cream.The final course was meant to be accompanied by a digestif – Jagermeister, in fact – but for some reason it never arrived.Which was all right, since we had already consumed just the right amount of alcohol for people who had to drive home after an eminently satisfying meal.The writer was a guest of the restaurant.Meat Kitchen Kosher 65 Yigal Alon St., Tel Aviv Tel: (03) 536-4755