Druse students left with sense of pride after meeting with Netanyahu

Students received scholarships from a program in memory of late Druse IDF officer. 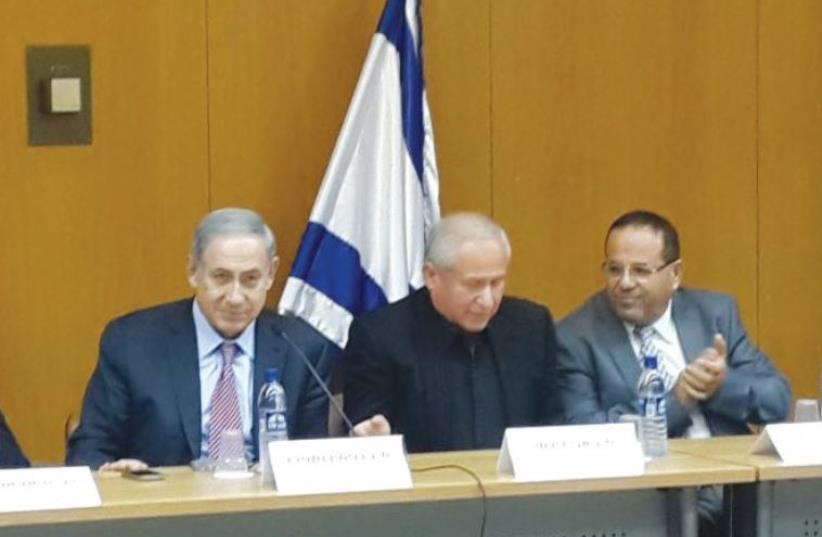 Netanyahu, Likud Deputy Minister Ayoub Kara (right), and MK Avi Dichter meet with Druse students in the Knesset on Monday.
(photo credit: Courtesy)
Advertisement
Dozens of Druse students who met with Prime Minister Benjamin Netanyahu in the Knesset on Monday left with a positive impression, the mayor of Majdal Shams told The Jerusalem Post on Tuesday.The students had received scholarships from a program fully funded by International Fellowship of Christians and Jews (IFCJ) in memory of late Druse IDF officer and former Majdal Shams mayor Maj. Salim Shufi. The scholarship program was established in 2013 for Druse university students who have performed either IDF or national service.The current mayor of the northern village, Dolan Abu Saleh, said Tuesday that the event with the prime minister and other important figures had given the students a sense of pride.“The memory of Shufi continues to be with us, as he did much for the security of the state,” said Saleh, who also attended the event.Others at the meeting included Acting Regional Cooperation Minister Ayoub Kara, Likud MK Avi Dichter, IFCJ President Rabbi Yechiel Eckstein, and Brig.-Gen. (res.) Dov Tamari.Eckstein, whose organization helped set up the event, said, "We created the Salim Shufi Scholarship program as a reflection of the covenant we have with the Druse community. They stand beside us on the front lines, and so it is our privilege to give back by providing their best and brightest with access to a quality university education."Members of Shufi’s family were in attendance as well.Born in Majdal Shams, Shufi joined the IDF’s elite General Staff Reconnaissance Unit in the ’60s and participated in numerous operations for the country’s security. Most notably, he helped save the lives of a Reconnaissance Unit force under the command of then-officer Netanyahu, by infiltrating Syrian territory and helping the force navigate back into Israel undetected.After the army, Shufi greatly aided in the advancement and development of the Druse community in his capacity as mayor of his hometown. He died in 2012 at the age of 82.“For me, Salim symbolized the living partnership between us, certainly the covenant of blood,” Netanyahu said on Monday.“Salim Shufi was a great moral force. He was a splendid man – modest, deep and imbued with values; I loved him very much. I always saw him as an exemplar.”The prime minister stated that “Salim did not have to die in order to become a legend; he was a legend in his lifetime.”He added, “We are certainly fighting for progress, culture, the future and life. I think that you, the family members, can be especially proud that he was part of your family. He was simply a great man, and I thank you for continuing in his footsteps.”The scholarship program plans to distribute some 75 scholarships to Druse IDF veterans in October. Lidar Gravé-Lazi contributed to this report.