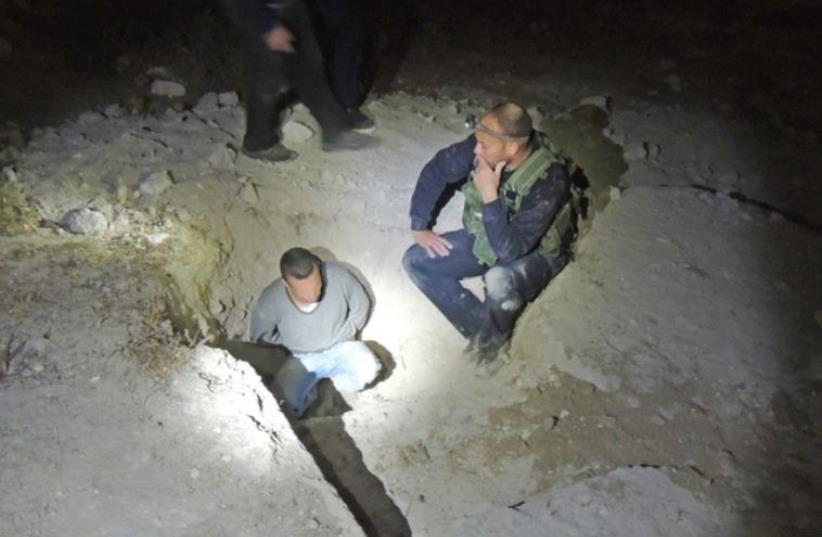 One of the suspects at the mouth of the cave‏.
(photo credit: Israel Antiquities Authority)
Advertisement
A Palestinian father from Jerusalem, claiming to be an exorcist, was arrested early Wednesday morning – along with four of his children and a family friend – for illegally entering and digging in a cave from the Second Temple period near the Hebrew University campus on Mount Scopus.According to the Antiquities Authority’s Unit for the Prevention of Antiquities Robbery, the unidentified father, from east Jerusalem’s Isawiya neighborhood, told his brood that a demon residing in the cave kept a buried treasure there that he wanted to procure.Shortly after the six breeched the government-protected cave, members of the authority’s robbery prevention unit found them endangering the archeological site by using digging equipment in an attempt to find the purported treasure. 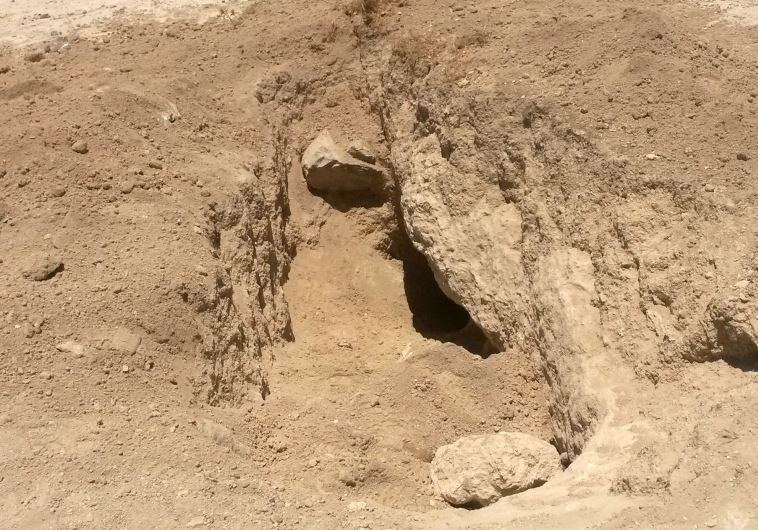 Photo: Israel Antiquities Authority“This is the second time in the last year that the Antiquities Robbery Prevention Unit squad stopped antiquities robbers at this important site,” said Antiquities Authority inspector Uzi Rotstein.Noting that the Mount Scopus area is one of the richest regions in the country in terms of graves from the Second Temple period, Rotsein said valuable relics – including oil lamps, glassware and jewelry – were often buried with the deceased.“These objects were invaluable in ancient times, and nowadays they have great value,” he said.“Apparently, teams of robbers hoping to find antiquities in the burial sites are hoping to rob the objects, which are protected in their entirety, because they were in the grave for hundreds and thousands of years.”Rotstein said all six suspects were arrested when they were found by Antiquities Authority theft inspectors with shovels and other digging equipment inside the restricted cave.During interrogation, the father said that two of his children recently entered the site and heard a muffled banging below the ceiling.“The father said he is an exorcist by profession, and removes curses from people cursed with them, and told the children that the noise was from a demon whose task it is to guard the cave because it contains an important treasure,” the inspector explained.All six suspects were released on bail and will be charged with the crime in the coming days, he said.Rotstein added that illegally entering antiquities sites is punishable by up to five years in prison due to the irreversible damage such digging and thefts cause.“Anyone who thinks they are going to find treasures is likely to instead find himself in custody at the police station,” he warned.