By BENJAMIN SINGER
Delivering plants to nursing homes
(photo credit: MICHA SILKO KKL-JNF PHOTO ARCHIVE)
Advertisement
Israel is part of the global war against COVID-19 and the Keren Kayemeth LeIsrael Jewish National Fund (KKL-JNF) is very much part of Israel’s campaign – both with regard to finding a vaccine and in helping Israelis adapt their lives to the new COVID reality.

The Migal Research Institute, in Kiryat Shemona, is developing a COVID vaccine. Migal’s CEO, David Zigdon says, “Four years ago, we started to develop a COVID vaccine for avian coronavirus (IVB) in chickens – now we are adapting it to a human vaccine.”

Dr. Doron Markel, chief scientist at KKL-JNF, explains that due to funding from KKL-JNF’s ‘Strengthen the North’ program, Migal was able to purchase specialized equipment to develop the vaccine.

Markel says, "It’s well-known that Israel is a start-up nation. The whole world is looking at us and waiting for a breakthrough. Our work at KKL-JNF supports the Galilee periphery by attracting scientists from Israel and around the world.”

Itai Bloch, biophysicist and computational chemist at Migal, says, “We have developed a unique and efficient solution – an oral vaccine for humans – we hope in the near future we will be able to provide this solution to deal with the COVID pandemic.”

KKL-JNF now hopes to procure further funding to help Migal speed up development of the vaccine and to establish a vaccination center for the development of future vaccines, both for genetic mutations of the coronavirus and for other viruses that are liable to break out in the future. 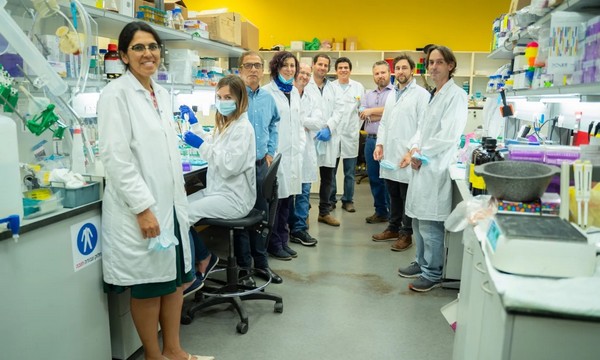 Beyond the vaccine, KKL-JNF has also been involved in numerous projects, helping Israelis live day-to-day as fully and effectively as possible, while keeping strictly to Health Ministry regulations. 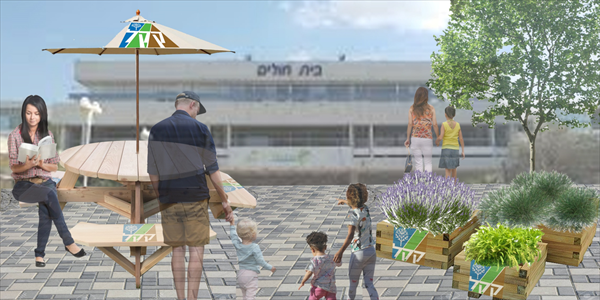 KKL-JNF World Chairman Daniel Atar says, "We decided to set up new relaxation areas in hospitals, in order to boost the morale of patients, medical staff and anyone who visits the hospitals during these challenging times, and to allow them to rest for a moment in a pleasant outdoor multipurpose space."

The KKL-JNF have also invested in community parks. "It’s good to have a place to meet outside with friends. That way our parents are less worried about corona”, says Shalev Polcheck, age 9. “We come to the park a lot and I particularly like the swings”. 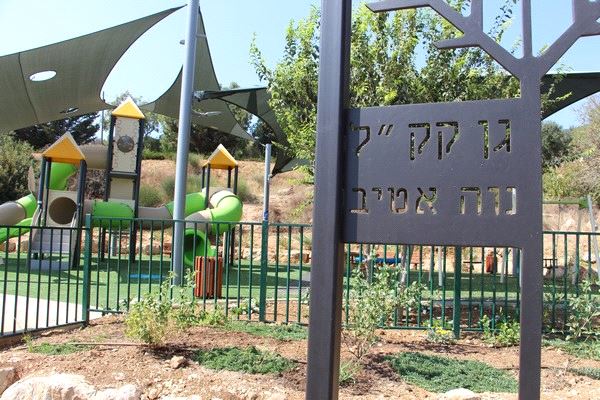 Around 100 of these KKL-JNF community parks are planned for kibbutzim, moshavim, towns and villages that encompass Israel’s Jewish, Arab, Druze, Circassian and Bedouin populations. The newly completed parks in the Golan Heights, created with the support of Friends of KKL Italy, are located in four communities: Neve Ativ, Keshet, Ma’ale Gamla and Ramot.

Groups have continued to arrive at KKL-JNF’s Nes Harim Field and Forest Center in the Judean foothills.

The Nes Harim Center, which was developed with the support of KKL-JNF’s Friends Worldwide including Germany, Switzerland, France, the USA, Italy, Scotland, Australia and Canada, is comprised of wooden cabins for guests, a high-tech educational enrichment center and well-equipped classrooms, where participants take part in a variety of nature workshops, educational activities, conferences and other events. The open-air forest classrooms also offer a convenient, well-shaded venue for gatherings among the trees.

“We try to instill KKL-JNF values through games, excursions and outdoor educational activities,” explains Nes Harim staff member Noga Razo. “And there’s no better place than the forest itself to teach people about the countryside, nature conservation and the environment.”

People from all walks of life come to Nes Harim: young and old, Jews and Arabs, schoolchildren and soldiers, Israeli groups and delegations from abroad. Among them are numerous groups of youth with special needs, who enjoy this unique opportunity to experience the forest. 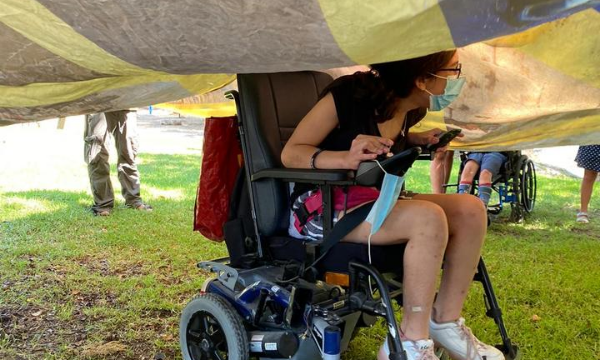 Special effort is invested in rendering the site accessible, to enable visitors with physical limitations to take part in activities. “We are constantly working to upgrade and make the facilities accessible and adapt them for use by those with special needs,” emphasizes former KKL-JNF Field and Forest Centers Director, Simon Elbaz. “I’m referring both to physical accessibility and adaptation of content.”

The Larger than Life NGO for children coping with cancer held a special camp at Nes Harim. “Here at camp I can talk about what I’m going through, and everyone accepts me very warmly and lovingly,” says 17-year-old Shaked Cohen of Hadera.

The SHEKEL organization for young people and adults with special needs held its annual summer camp at the Field and Forest Center . The campers explored the forest and took part in social and adventure activities. Mira Glendauer of Jerusalem says: “Sleeping in a woodland hut at night is a very special experience. I like walking, too, and being active physically.”

Contributing to the community and helping weaker segments of society are key values that stand at the core of the KKL-JNF Workers’ Union. Due to COVID restrictions, while most people stayed home, KKL-JNF staffers pitched in to deliver food baskets to needy families and assist farmers with selling their produce.

“Our workers have a special characteristic that you won’t often find elsewhere. They have big hearts,” explains Yisrael Goldstein, Chairman of the KKL-JNF National Labor Union. “These are people who, because of their desire to contribute to the state and society, derive profound satisfaction from their work.”

The union was in touch with a farmer from Moshav Yanuv in central Israel who, like many other Israeli agricultural entrepreneurs, found himself in trouble. “We bought boxes of fruit from him, combined them with other food baskets and donated bottles of wine and presented them to KKL-JNF workers who were in financial straits because of the economic crisis resulting from COVID.”

“We are thankful for this opportunity to do good deeds, to show those who are less fortunate that they are not alone”, says Goldstein. ‘’Times are difficult enough as it is, and we do not want anyone to feel lonely or suffer from a lack of basic supplies.’’

KKL-JNF workers are traveling around the country, bringing gifts, warm smiles to disadvantaged populations. ‘’In these COVID times, we have increased our outreach to the wider community. We promote not only worker’s rights and environmental protection; we care about the well-being of all of Israel’s citizens,’’ Goldstein concludes.

The converted trailer, sporting a colorful banner with the slogan ‘’KKL-JNF Workers Union –Working for the Community’’, has brought joy to the faces of residents in assisted living facilities all around the country.

This inspiring project is the perfect antidote to the COVID related social isolation that is especially difficult for weaker populations. ‘’Each contact means so much to those we visit as well as to us,’’ says Miri, one of the volunteers, ‘’I see how eyes light up the moment we walk through the door.’’

KKL-JNF led the way in running outdoor cultural activities over the summer – mostly for free or a symbolic amount.

They maximized use of their forests, in their ‘Back to the Forest’ fun days, in three of its main forests: central Israel’s Ben Shemen Forest; Plugot Forest in the south; and Carmel Coast Forest in the north,  where the main event took place.

“In these COVID times when we’re stuck inside so much, it’s fun to get back to the KKL-JNF forests and nature,” says the organization’s public relations officer for the northern region, Revital Aviv. “We’ve been waiting such a long time for this, and we know that the public has been missing the forests too. It’s fortunate that we’re getting a chance to enjoy the spring and its flowers.”

KKL-JNF has built an impressive amphitheater in the Ben Shemen Forest, which is already hosting performances and shows. When the Health Ministry regulations permit, they plan on increasing the number of attendees and expanding their activities - which will include subsidized outdoor concerts with popular Israeli performers.

Atar says: “KKL-JNF sees contributing to the community as a supreme value, and this is why we are committed to helping the world of culture and art. Israel’s citizens and artists deserve to experience anew a routine that enables us all to enjoy a little fun and inspiration during these difficult times".

The KKL-JNF also ran "Selichot tours" throughout Israel from Rosh Hashanah to Yom Kippur, all around Israel.

Odia Billing, the project manager, explains: "We in KKL-JNF chose to carry out the Selichot tours during this period, when everyone goes out. We called the Selichot tours “heart examiner”, with the goal that we will examine our hearts, everyone will have a self-examination, and after that we become more connected to ourselves, and able to connect with society and the people of Israel”.

From being part of the world race to finding a vaccine to helping regular Israelis – especially the disadvantaged and those on the periphery – live a routine and meaningful life in these challenging COVID times, the KKL-JNF is doing outstanding work throughout Israel.

To donate and support their tremendous efforts, click on here.