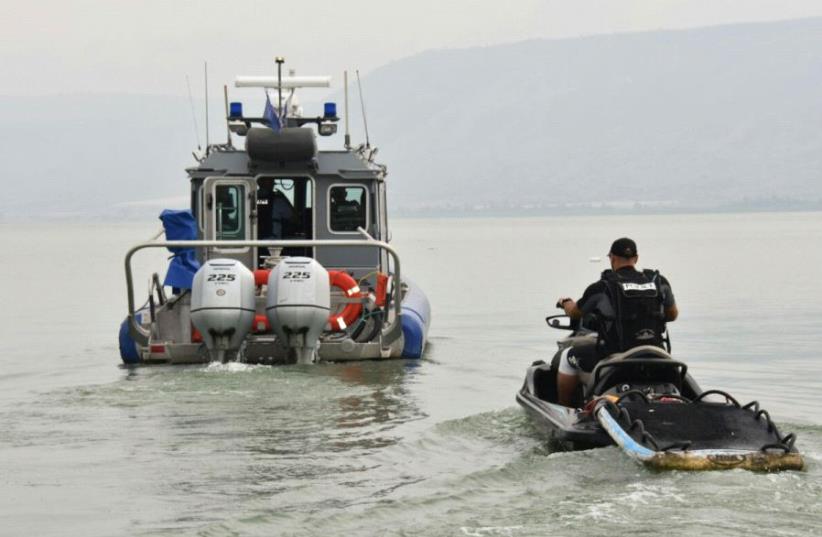 Police forces search for missing youth on Lake Kinneret
(photo credit: COURTESY ISRAEL POLICE)
Advertisement
Funerals were held on Tuesday for Nachman Itach, 21, and Liron Karadi, 17, who drowned in Lake Kinneret last week and whose bodies were found on Monday. Meanwhile, police located the body of the last missing youth, Itamar Ohana, 19, on Tuesday.“Nachman, where did you go Nachman? Who will look after me?” Itach’s mother said at the Givat Shaul cemetery in Jerusalem, as reported by Ynet. “Death came from the window, like a thief. From where did this blow come to us?” Itach’s uncle, Yaakov, said at the funeral.Itach and his girlfriend were swept away on an inflatable mattress, which flipped over. A civilian on a jet ski rescued the woman but failed to rescue Itach.The three youth went missing in separate incidents while lounging on inflatable mattresses on Lake Kinneret last Wednesday.Hundreds attended the funeral of Karadi, in Or Akiva, who left behind his parents and two brothers.“What did you do to your father? I waited for you day and night by the water, waiting for you to arrive,” Karadi’s father, Ofer, said according to Ynet. “God in heaven, answer me, why take him? How could such a thing happen? Why, the Creator, why did you do this to me?” Karadi was lounging with friends when they drifted out to sea and their inflatable mattress exploded, police said. One of them was rescued by one of the same civilians on a jet ski. Karadi’s body was located on Monday at a depth of approximately 25 meters.On Tuesday, Ohana’s parents spoke to Channel 2 as they anxiously waited on the shore of the Kinneret for updates on the police search effort, before the body was located Tuesday evening. “What’s going on with Mom? Mother does not sleep, we do not sleep, we are barely eating, barely drinking, it’s hard,” Ohana’s mother, Rachel said. “We try to stop the tears because there are other brothers here; we are trying to calm the emotions.”Ohana was with two other teenagers when they were swept away by the strong winds. The two others were able to save themselves, police said, but Ohana drowned.According to Ohana’s parents, their son helped save the two others. “The boy did a holy job here; he saved two of his friends,” Ohana’s father, Shimon said.“I never let him go alone, he always went out with us,” Shimon said. “He asked to go and said, ‘I have a birthday party.’ I told him I had cut the cord.”Hananel, Ohana’s sister, told Army Radio on Tuesday that, “We know that he is no longer alive; we only want a grave to visit him.”The search for Ohana concentrated on the eastern side of the lake, where the teenager was last seen.A navy crew using sonar joined the search effort on Sunday, which led to the discovery of the three bodies.The sonar was used in conjunction with a police helicopter, boat, mounted and diving units, as well as ZAKA rescue units and volunteers.On Monday night, Public Security Minister Gilad Erdan expressed his condolences to the families.“Along with the joy of the holiday, it was also a sad evening in which the bodies of Liron Karadi and Nachman Itach were found. I am very sorry that the search has ended like this. My sincere condolences to the families.”In a statement on Tuesday, the Northern District Police reiterated safety warnings for those enjoying the lake.“In general, it is advisable not to enter the water alone, but with an additional adult, especially for small children,” the statement read.