Giving kids a leg up

Growing up isn’t easy and when the cards are stacked against you, it’s even harder. 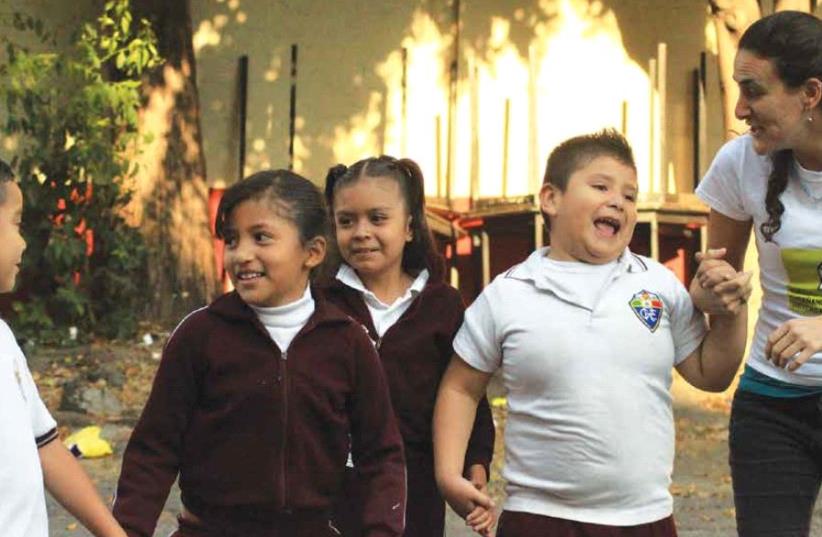 E4S children hold hands with its founder and president, Dina Auron.
(photo credit: Courtesy)
Advertisement
The school year usually kicks off with a hint of optimism: Going shopping for supplies, buying a new outfit and making plans to meet up with friends are on the to-do lists of most children.However, for those who don’t have a support system and are on the outside looking in, it’s hard to muster enthusiasm for the new school year.As the 2017 back-to-school season officially gets started, The Jerusalem Post spoke with three entrepreneurs from around the globe who are working hard to make sure those children not only want to go to school, but flourish while they are there.‘From Mea She’arim to Harvard’ Menachem Bombach Executive Director, Torah AcademyNot many people who hail from the closed, insular, ultra-Orthodox Jerusalem neighborhood of Mea She’arim make it to Harvard University.But that is exactly what Menachem Bombach succeeded in doing. As a graduate of the Maoz International Program, which spends two weeks at Harvard Business School, Bombach was able to rub shoulders with the leaders of tomorrow.

Menachem Bombach delivers remarks while introducing a new Torah scroll at a school (Courtesy)That experience was helpful in influencing the work he does today as the executive director of the Torah Academy, a high school for haredi (ultra-Orthodox) children who want to continue their religious studies while also learning subjects critical in the modern world like English and math.Torah Academy, then, gives students knowledge that’s crucial for getting a job upon graduation, something that most ultra-Orthodox students can’t obtain because they don’t have the basic education necessary to do so.“There’s a big educational gap,” Bombach laments. “They don’t know their ABCs or math and very little time is dedicated to that.”At Torah Academy, Bombach teaches more than reading, writing and arithmetic – he demonstrates the biggest life lesson of all: the need to be constantly engaged in the world around you.“We teach them how to operate in that complicated world. There is no black and white. I tell them, ‘Be attentive.You’re haredi, but you can’t live in the world and not be involved,’” he says.Of course, giving these children a glimpse into the modern world is not without its challenges. Enrolling in the school raises a lot of issues for students who wonder how they can maintain their religious learning responsibilities while studying secular subjects that are completely new to them. They also feel a certain societal pressure; that learning these subjects is like a social experiment for their communities, and if one student fails, it demonstrates that haredi kids are simply not equipped for secular education.“They feel they must succeed because doing this is symbolic of something larger than themselves,” Bombach explains.Finally, there is, of course, the challenge of older generations who don’t want their kids exposed to secular education.But the resistance, Bombach says, is short-lived.“After a while they see the kid is happy and satisfied, it changes their outlook. Nobody has removed a kid from our classes,” he says.At the moment, Torah Academy teaches only boys, but Bombach is working on educating girls as well, who have their own set of societal challenges.But despite Bombach’s accomplishments, he’s still a boy from Mea She’arim at heart and for every student he helps, he recognizes a bit of himself.

Ask a child what his or her favorite subject is in school and you’ll most likely hear them profess their love for recess. And why not? The act of playing and using one’s imagination comes naturally to most children.Dina Buchbinder Auron has decided to leverage that fact by having kids learn while playing. At Education for Sharing (E4S), there are four programs where children can learn while being active and creative: Sports for Sharing, Science for Sharing, Initiatives for Sharing and Art for Sharing.The ultimate goal is to ensure that children from a young age can be agents of change in a complex and volatile world.Currently, E4S operates in six countries: the United States, Mexico, Argentina, Guatemala, Dominican Republic and Colombia. In these countries that are often weighed down by violence and corruption, empowering children to be forces for good in the world is key.“We’re trying to form better citizens,” Auron says. “We believe the major global challenges come from a lack of supporting a different kind of citizenship and not correcting negative attitudes and behaviors. We’re convinced that if we changed those attitudes from young ages, we would no longer have to tackle the consequences of those attitudes on a larger scale in the future.”Auron, who started the program 10 years ago, works with children from predominately disadvantaged backgrounds from ages six to 12 years old.The one aspect that ties them all together, though, is a love of play.“We believe this kind of education methodology is for everyone. Adults love to play too, but they forget. It’s a human, universal language,” she says.How does it work? An example of the pedagogical model in action is a game called Dr. Tag. It works very much like the playground classic, but with a dark (but educational) twist. Children are divided into teams where each one has one doctor, and a certain amount of vaccines available for distribution. They are told that an incurable disease has spread, and they need to preserve as many lives as possible as the game goes on. Not only is the exercise designed to show children the importance of empathy, but it also teaches a real-world example that certain resources are limited and fighting for them starts many global conflicts.“I think children are very sensitive. At those ages, it’s amazing how they first connect to the game and there are different elements that each child will be impacted by in a different way,” she explained.Since its inception, more than 700,000 students have learned from this method. A decade later, Auron is seeing the fruits of her labor as children grow into young adulthood.She points to one student who is now 18 who attended a public school in Mexico City. He eventually created a project to build urban gardens for his school. He told Auron that his dream is to become an E4S educator.E4S also keeps in touch with teachers, so they can continue to tweak and expand the curriculum year after year.Like Bombach, Auron also identifies with her students.Raised in Mexico, Auron was indifferent to school and often found herself bored.But when she got to play, that is when she came to life.As the famous hit “The Greatest Love of All” says, “I believe the children are our future, teach them well and let them lead the way.”E4S may not have a theme song, but if it did, it would be appropriate for Auron to shout those lyrics from the rooftop.‘There is nothing you can’t do’ Lior Lapid Executive Director, Ore to ExcellenceIn Israel, it is usually those from the center of the country or Jerusalem who get all the glory. But the Ashdod-raised Lior Lapid has bucked that trend and is working hard so other students from the periphery can do so as well. Lapid, who served in the IDF’s elite 8200 intelligence unit and was a Social Entrepreneur Fellow at IVN (Israel Venture Network), developed Ore to Excellence, a non-profit that instills the importance of contributing to one’s community in the less-populated Israeli cities. 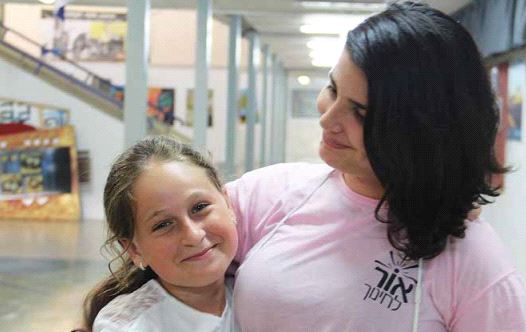 An Ore to Excellence student poses with her mentor. (photo credit: Courtesy)Looking at his resumé, one would think that Lapid was an overachiever from day one. But this was not always so.Lapid, who plays the violin, had one inspirational moment when a teacher came up to him and said, “If you’re good enough or capable enough to play the violin, there is nothing you can’t do.”It is that kind of self-confidence building that Lapid hopes to instill in every Ore to Excellence student.“We work directly with schools and counselors and ask them to locate a student who has the potential to do well in a variety of fields, but they’re not living up to that potential,” Lapid explained.Through mentorship, Ore to Excellence locates the shyer, more introverted kids and gives them the confidence to come out of their shells.Unlike many educational programs, Ore to Excellence doesn’t target the best and brightest or those who are very high risk, but rather looks to the center where children are oftentimes ignored for being “average.”“There’s this big chunk of students in the middle who are being ignored. We think that’s where the real potential lies in terms of having a big impact,” he says.Like the other two educators mentioned above, Lapid, too, is speaking from experience.“I went through many moving experiences, many of them had to do with growing up [in Ashdod]. I have my own narrative that makes me feel their pain and understand the opportunities we have over there,” he says.Ore to Excellence caters to children throughout their educational career. From elementary school to high school to college, there is always a role these children can play in perpetuating the cycle of mentorship.Mentees are encouraged to become mentors once enrolled in college, so they know the satisfaction of giving back to their community.“We give them the ability and option to come back, but it’s always their choice. Wanting to be part of this positive magic circle makes a strong impact in the community,” he says, adding that as of now, there are 2,500 Ore to Excellence alumni and 300 students currently enrolled this year.Using the diamond-in-the-rough analogy, Lapid explains, “We see these students as rocks that need to be polished, their light is already inside of them.”On the surface it may seem like the only connection between these three educators is a love for teaching.However, each is part of the Schusterman Family Foundation’s ROI Community, an international network of change makers who are pursuing innovative work in innumerable fields for the betterment of the Jewish and broader worlds.“ROI Community is a network of over a thousand leaders collectively connecting millions,” Justin Korda, executive director of ROI, says.“Educators and educational entrepreneurs like these three are at the forefront of shaping our collective future, and they embody the kind of creativity and impact that we strive for in this world.”As an ROI member, Bombach has internalized the ROI mission of Tikkun Olam and is grateful that he can rely on that community for moral support.“They are very pluralistic,” he says of the ROI program.“They don’t want to change you, they want to enhance what you’re already doing. They are really a massage for my soul.” ■ This article was prepared in cooperation with ROI Community.