Golda Meir is gone: Israel has a long way to go on gender equality 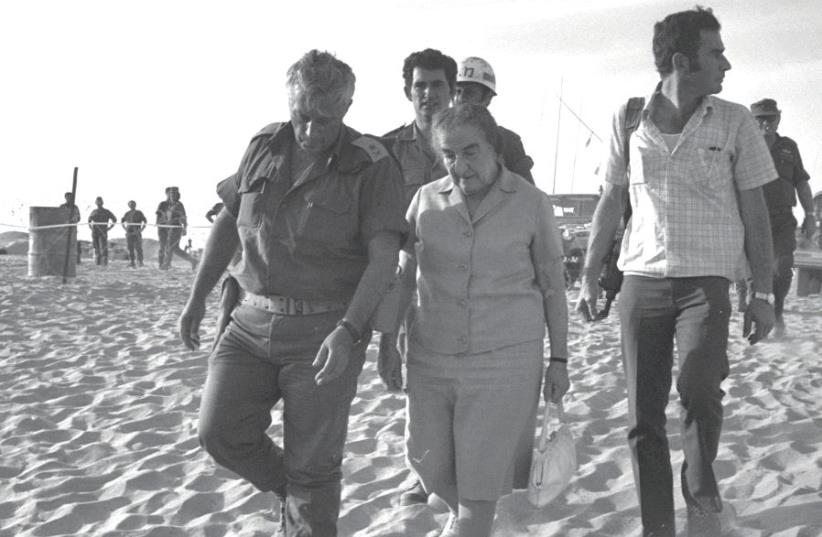 ‘AS THE only democracy in the Middle East, Israel’s legal guarantee of rights has meant that women play crucial roles in all aspects of Israeli society.’ Gold Meir during the 1973 war.
(photo credit: REUTERS)
Advertisement
Whether the establishment of March 8 as the annual International Women’s Day has its roots in a protest held that day by women garment workers in New York in 1857, or in a women textile workers’ protest in Petrograd in 1917, is – at this point – immaterial.
Today, International Women’s Day is significant because it compels many countries to look in the mirror and ask how they are doing regarding women’s rights: in terms of female representation in politics, science, academia and business; in terms of employment; in terms of equal pay; in terms of equal opportunity; in terms of protecting women from violence.
And when Israel looks in that mirror, what it sees staring back is a decidedly mixed bag: In some areas, such as educational opportunities, it is faring well; while in others, such as high-level political representation, the picture is less sanguine.
For instance, Golda Meir, who served as prime minister from 1969-1974, was an anomaly. Not only has there not been a woman prime minister since, but there has not been a women defense minister or finance minister ever, and – in addition to Meir who also served as foreign minister – only one other female foreign minister:  Tzipi Livni.
This country has yet to have a female president, and while it has had three female presidents of the Supreme Court, including the present one, Esther Hayut, only once did it have a woman serve as Knesset speaker: Dalia Itzik.
True, eight women were among the  34 ministers sworn in last May, but they were assigned second-tier ministries, with the weightiest one being the Transportation Ministry given to Miri Regev. But the big three portfolios after the prime minister – foreign, defense and finance  – were, as usual, firmly in male hands.
The leadership of the country’s major political parties also remains very masculine. Just look at the eight parties the polls are showing leading in the upcoming election: Likud, Yesh Atid, New Hope, Yamina, Yisrael Beytenu, the Joint List, Shas and United Torah Judaism. Not one of them is led by a woman, though in a sign perhaps of things to come, no less than six parties – Yesh Atid, New Hope, Yamina, Blue and White, Meretz and the Religious Zionist Party – have a woman at No. 2.
The only female candidate to lead a major party is Labor’s Merav Michaeli, whose party, according to Friday’s Maariv/Jerusalem Post poll, was forecast to win five seats.
If the Maariv/Jerusalem Post poll was to be completely accurate in predicting the 24th Knesset, 34 women will be entering parliament in two weeks – three less than the record 37 who served in the 20th Knesset, but still representing only 28.3% of the MKs.
Since the establishment of the state, there have been 1,016 Knesset members, of whom only 146, or just over 14%, have been women.
Raw numbers, however, are only meaningful in comparison, and compared with the rest of the world, Israel’s female representation leaves much to be desired.
According to the Inter-Parliamentary Union, as of January 2020 – when Israel had 28 women in the Knesset – it was ranked 83rd out of 189 countries in the proportion of women legislators.
As Israel approaches its fourth election in two years, one striking element is how so little has changed over the last three elections: same parties, more or less; same faces, more or less; same messages, more or less.
Makor Rishon columnist Avi Shavit wrote Friday that none of the male leaders are exactly electrifying the crowds or “stopping traffic.” The two politicians who were standing out, he wrote, were women: Labor’s Michaeli and Likud’s new female candidate – hand-selected by Prime Minister Benjamin Netanyahu for the 12th Likud slot –  Galit Distal Atbaryan.
Beyond political representation, the country also has a long way to go toward equal pay for equal work.
Statistics released by the Central Bureau of Statistics before last year’s International Women’s Day showed that the average gross monthly salary of women was some NIS 4,000 less than men: NIS 8,546 compared with NIS 12,497.
While part of this gap was explained by men working longer hours than women (44.7 hours a week for men compared with 36.9 hours for women), there was still a significant difference if the salaries were broken down into hourly wages: NIS 66.30 for men vs NIS 55.70 an hour for women.
One area where there is gender equality is in education. According to CBS figures in 2019, 71% of all girls matriculate from high school, 11 points greater than the percentage among boys. And as an indication of how far Israel has traveled regarding women pursuing degrees, in the 2019/2020 academic year, some 59% of all students pursuing degrees were women, as opposed to 43% 50 years ago.
Israel has a long way to go when it comes to tackling domestic violence, with some 35 women murdered by their spouses or family members in 2020, a nearly 170% increase from the 13 women murdered the year before. One problem has to do with the country’s budget for social services, with Israel’s ranked among the bottom 10 of the 37 OECD countries when it comes to spending on social services.
Everything is relative, and – when compared with other countries in the world – Israel was ranked 30th in a study on gender equality among 100 countries with comparative data undertaken by the German neobank N26.
This placed Israel well behind the Scandinavian countries, some European nations and South American countries such as Argentina and Chile when it comes to women’s equality as gauged across a wide array of metrics. But it was higher than some other European countries, such as Ireland, Italy and the Netherlands, as well as the US, Japan and all the other countries ranked from the Middle East.
On the one hand, one could argue that 30th place out of 100 is not that horrible. On the other hand, it is clear on this International Women’s Day that Israel still has a long way to go.