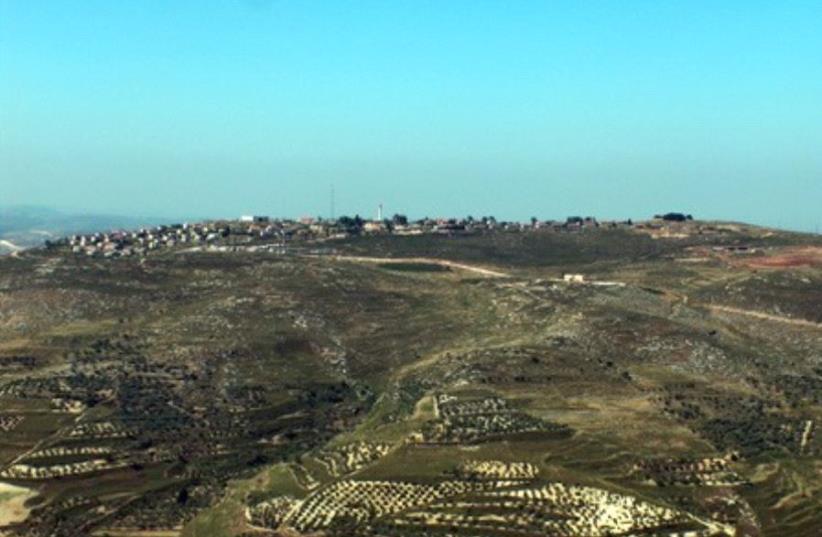 Yitzhar, as seen from a neighboring settlement
(photo credit: MICHAEL JACOBSON/WIKIMEDIA COMMONS)
Advertisement
Settlement construction is not being restricted to the large settlement blocs but is being carried out according to guidelines set by the security cabinet some two months ago, sources close to Prime Minister Benjamin Netanyahu said Sunday night aboard his plane back from Liberia.The sources were commenting on complaints among settlement leaders that the government is significantly restricting construction beyond the Green Line.These complaints are coming even as the Higher Planning Council for Judea and Samaria is expected later this week to authorize and advance some 2,480 new units beyond the Green Line.In recent days, settlement leaders have complained that many of the units to be listed in the upcoming announcements have already been authorized in the past, and that the government is not building as much as it could under US President Donald Trump.The sources in the Prime Minister’s Office rebuffed the criticism, saying that the government is building according to the decision made in the security cabinet in late March, following weeks of discussions on the matter with US Middle East Envoy Jason Greenblatt.The sources stressed that there was no distinction being made between settlements inside the security fence and in the large settlement blocs, and those beyond it, and that communities such as Sussiya and Itamar can submit plans, just as communities like Ma’aleh Adumim and Ariel can.The sources said that the policy guiding settlement construction was to fill in the areas inside the existing settlements, and when the building inside the settlement is maximized, then to build “close to the wall.” This means that new neighborhoods will be built as close as possible to the “wall” of the outer neighborhood of the existing settlement to reduce the settlement’s “footprint.”March’s guidelines allow for extending beyond the existing construction line, as long as the new building is adjacent to the outer neighborhood of the existing settlement.