A story about peace in a divided city. 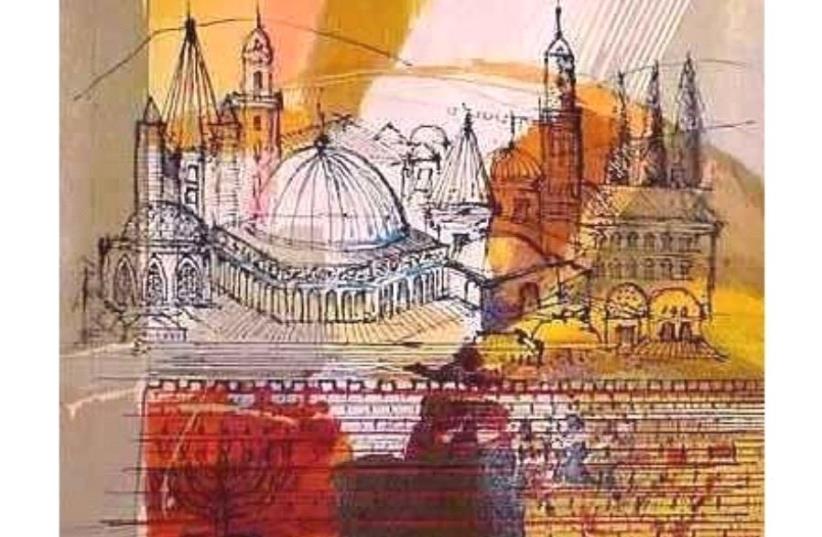 Jerusalem of Peace by Calman Shemi
(photo credit: JWG LTD)
Advertisement
Racism, hostility and hatred are often born out of ignorance and fear of the other. But how can we stop fearing the other if we make no effort to learn about and understand the other? Two young women, whose story by Nir Hasson was published in Haaretz, have not only learned the importance of this lesson but have transmitted it to others in their own communities. Manar Bader 26, a Palestinian who lives in east Jerusalem, and Lior Orian 36, an Israeli who had been raised in Tel Aviv, met as students at the Hebrew University of Jerusalem.Despite their national, cultural, religious and language differences, the two hit it off almost immediately and became firm friends.
Until Bader introduced her to the realities of east Jerusalem, Orian had no idea of what life there is like for the residents. The only information she previously had was from what was relayed by the media. The two decided that Bader would teach Orian Arabic and Orian would teach Bader Hebrew.After a few years passed, the two maintained their friendship and began to think that their personal story was itself the story of Jerusalem. They realized it would be mutually beneficial for Arab women and Jewish women to get together to learn each other's language and get to know each other. They posted a Facebook notice inviting women from both sides of the city to come and learn each other's language. Within two days, 250 women from all over Jerusalem had registered. There are currently 700 women listed.
The first meeting took place on the roof of the Panoramic Golden City coffee bar in Jerusalem’s Old City. The proprietors were so enamored with the idea that they hosted the event free of charge. The women sat at tables and talked to each other. From teaching and learning each other's language, they also got to know about each other's lifestyle: What it's like to be searched at checkpoints? What it's like to live in fear of terror? Who goes to work, who doesn't and why? and many other issues. Jewish-Arab and Israeli-Palestinian friendships were formed because the women looked at each other as individual people rather than as enemies.
Many Palestinian Arab men speak Hebrew quite well, having learned it during employment by Israeli enterprises. Very few Palestinian or Arab women, in general, are employed in Israel, so learning Hebrew was more difficult for them. With the help of their new Israeli friends they have made admirable progress.The moral of the story is that peace can be made through people-to-people contacts and not through politicians. The picture of Palestinians that is commonly presented to Israelis is far from the true image, just as the picture of Israelis commonly presented to Palestinians is far from the true image.It took two women – one from each side – to show how easy it is to make peace when the two sides understand each other.
Perhaps the politicians should stay out of the peace process and leave it to the people?■ HAS THE Great Synagogue seen the end of its glory days? In bygone years, the synagogue was packed to capacity during the High Holy Days. This year, there were quite a number of empty seats on both Rosh Hashanah and Yom Kippur. It seemed that many of the regulars from abroad had given Israel a miss this year. Whether it was for political, financial or family reasons is anyone's guess. But for people who have been attending High Holy Day services ever since the synagogue's inception in 1982, it was obvious that the Great Synagogue has fallen on hard times. With all the goodwill in the world, the synagogue, due to its financial circumstances, is in a state of disrepair. The automatic escalator was not working on Rosh Hashanah or Yom Kippur. There was a broken stair on at least one of the staircases leading to the women’s gallery. The Sabbath elevator was too slow and only reached the second floor, which meant mounting two and even three staircases on foot.The economic dire straits necessitated that congregants entering the lobby were faced with a giant placard welcoming them by acting president Zalli Jaffe, who, in the most diplomatic language, stated that he was sure that congregants understood the financial costs involved in the magnificent service provided by the cantor and the choir, coupled with general maintenance costs and security can not be met without congregants paying for their seats and perhaps making an additional donation.