Haifa revokes approval for wedding of Rebbe of Vizhnitz's granddaughter

In an alternate reality, not affected by the coronavirus pandemic, the wedding of Pearl Malka, granddaughter of Rebbe of Vizhnitz, Rabbi Yaakov Hagar, would have attracted tens of thousands. 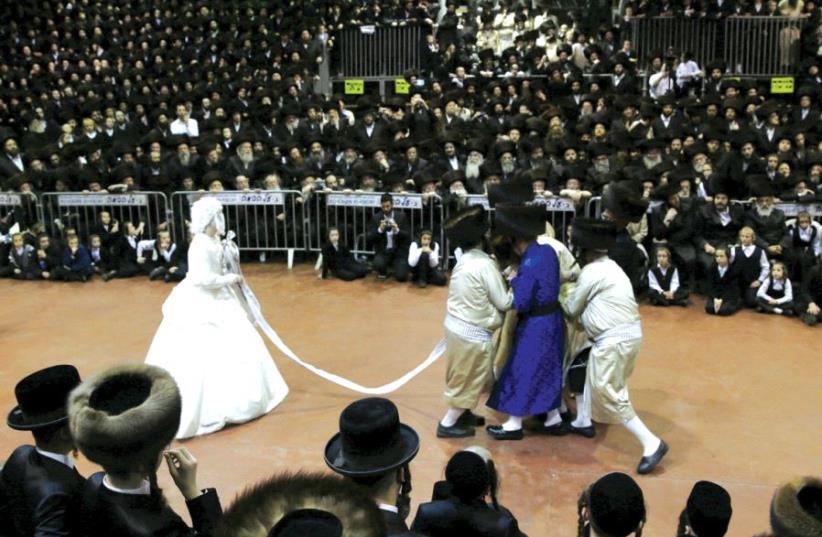 Thousands of ultra-Orthodox take part in a wedding linking two prominent Hasidic dynasties in Netanya, on March 16
(photo credit: REUTERS)
Advertisement
The Haifa municipality decided on Friday evening to revoke an approval that was previously issued for Rebbe of Vizhnitz's granddaughter's wedding, which was set to take place in the city's Romema Arena.  According to the municipality, the event was canceled for various reasons, but primarily due to the fact that Haifa has been designated as an orange city. "All mass events will be reexamined and planned for accordingly in the next few days," a statement issued by the municipality read. In an alternate reality, not affected by the coronavirus pandemic, the wedding of Pearl Malka, granddaughter of Rebbe of Vizhnitz, Rabbi Yaakov Hagar, would have attracted tens of thousands of hassidim from across the country for a several-days-long event. Local residents were furious to learn about the expected wedding, which they believed would violate coronavirus restrictions. However, the Vizhnitz hassidic dynasty reportedly clarified that the event was planned to take place under restricting conditions and according to the guidelines that allow holding culture events. Those who oppose the wedding insisted that it could increase infection rates in the city and consequently change its status to a red city. "The event was meant to take place without serving food and without dancing. It can hardly be called a wedding," said a member of the Vizhnitz family. He added that 1,000 people, divided into two groups of 500, were planned to participate in the event, while being divided into groups of 20 people seated together and prohibited from changing places.   According to the latest national plan to combat the spread of the virus proposed by coronavirus commissioner Prof. Ronni Gamzu, holding a cultural event in an orange city, while filling 20% of the hall's capacity, and in groups of up to 25 people, is allowed. The Romema Arena in Haifa can hold up to 5,000 people, making the wedding acceptable according to the guidelines and much below the allowed threshold.