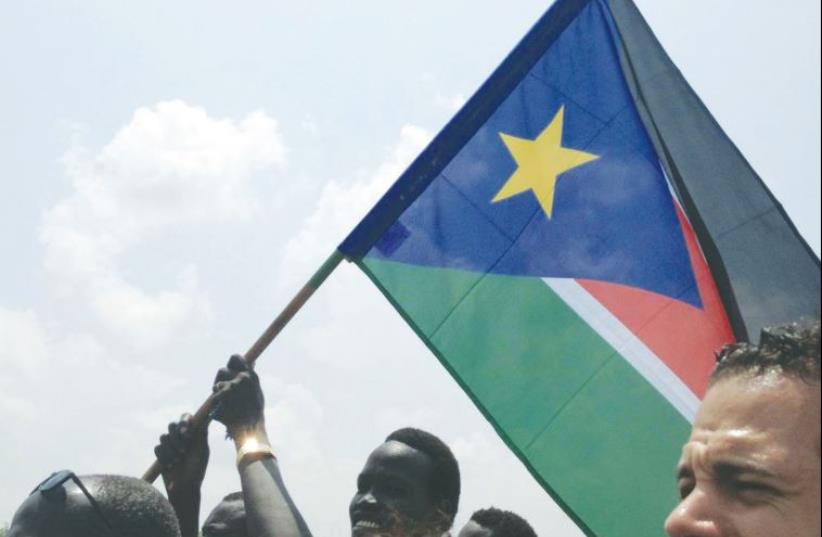 A PROUD CITIZEN waves the South Sudan flag at a pro-government demonstration on Monday, the same day the Israel Forum for International Humanitarian Aid (IsraAID) became trapped by the local internecine conflict.
(photo credit: ISRAAID)
Advertisement
A mission head for the Israel Forum for International Humanitarian Aid (IsraAID) was caught in the heart of conflict in South Sudan Monday, several days after renewed fighting broke out between forces loyal to the president and those backing the vice president.IsraAID’s South Sudan country director, Ophelie (family name omitted for safety) was residing at a compound in Juba, adjacent to a hotel that was blown up in the recent escalation of violence.As the Foreign Ministry advised Israelis to stay clear of the country, IsrAID’s founding director, Shachar Zahavi, was scrambling to find a way to extract Ophelie from the volatile area, as the international airport has been closed. Israel does not have an embassy there; it has a non-resident ambassador stationed in Jerusalem.The ministry said its recommendation to refrain from traveling to or remaining in that country follows clashes in the capital of Juba that began on Thursday and have led to “hundreds of deaths.” The recommendation is in place until the situation in the country becomes clear, the statement said, advising those who are already there to leave as soon as possible.The compound housing Ophelie and other international staff is secure, though she noted that heavy gunfire, including RPG and rockets, could be heard from this location. Mortar shells are believed to have landed nearby and Ophelie told The Jerusalem Post that the sound of heavy artillery could be heard throughout the morning and staff “could feel the ground shaking under our feet.”Ophelie has been living in South Sudan for five years,as long as the existence of the independent country. She expressed deep sadness at the escalating violence, recalling the hope and optimism that enveloped the nation following its creation.“Nowadays, it seems that it is not the same country anymore” she told the Post. “People are scared, hopeless, frustrated and in pain. Profoundly in pain. We used to celebrate the independence like the best day of the year. We were dancing, singing, hugging. There was no tribe. No differences. It did feel like one united South Sudan during those days.”IsraAID is in South Sudan to implement programs in the fields of women’s empowerment, gender-based violence, child protection, psycho-social support, public health and education. The humanitarian organization collaborates with local partners in South Sudan in an effort deliver these services to vulnerable communities affected by conflict, displacement and trauma.“And now, on the very day of the independence anniversary, Juba was under fire. People were crying and praying. No more singing, no more dancing. The war has resumed. And all these people fleeing now, 200,000 and more. Where will they go?” Ophelie added. “The place is in total chaos. It just looks like hell. It is hell for all these innocent people who were just aspiring to finally live in peace. Hell.”The struggling, war-torn country of South Sudan was one of the east African countries that Prime Minister Benjamin Netanyahu spoke about during a landmark visit to Africa last week, as having an interest in closer ties with Israel. During the trip, Netanyahu met with South Sudan President Salva Kiir at a summit with seven east African leaders in Uganda.The fighting broke out Thursday between troops loyal to Kiir, an ethnic Dinka, and soldiers loyal to his vice president, Riek Machar, a Nuer. South Sudan’s two-year civil war that ended last year was fought largely along ethnic lines, and some 50,000 people were killed.