Elor Azaria was at the center of a countrywide controversy when he was convicted of manslaughter after he killed a Palestinian perpetrator who had already been neutralized. 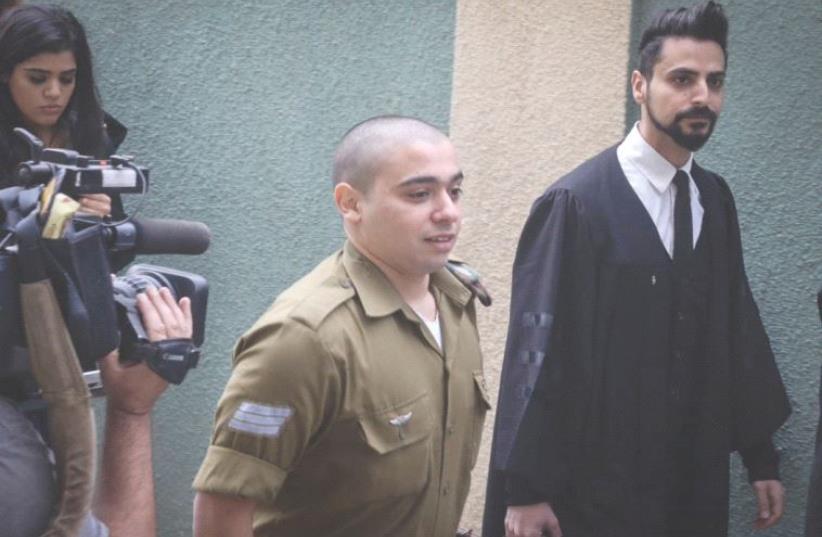 SGT. ELOR AZARIA appears in the Jaffa Military Court in November.
(photo credit: FLASH90)
Advertisement
Elor Azaria, the Israeli soldier convicted of manslaughter for shooting an immobilized Palestinian assailant, collapsed on Sunday and was hospitalized at the Nahshonim army base where he is being held, Hebrew media reported.Associates of the Azaria family who spoke with Hebrew media said the stress of being convicted in February and an upcoming sentencing decision led to the incident. Azaria was given an 18-month sentence, however, his defense team filed an appeal on sentencing and a decision is expected in a few weeks.According to Channel 2, Azaria’s parents came to visit him and his life is not in danger.Azaria – a sergeant in the Kfir Brigade, since demoted to the rank of private – was convicted of manslaughter in February for the March 2016 killing of Abdel Fattah al-Sharif, who had stabbed another soldier in Hebron and was lying on the ground after being shot and wounded.A final appeal of the guilty verdict in late May turned into a shouting match as a panel of five judges of the IDF Appeals Court questioned Azaria’s defense team about holes in their arguments to overturn the verdict.The judges also heard the prosecution’s appeal that the 18-month prison sentence was too light and pressed both sides to again mediate. The prosecution said it would check with the Military Advocate General.A number of Israeli politicians including Prime Minister Benjamin Netanyahu have called for a pardon of Azaria.Yonah Jeremy Bob contributed to this report.