In a world of fast evolving education, one school network stays ahead of the curve 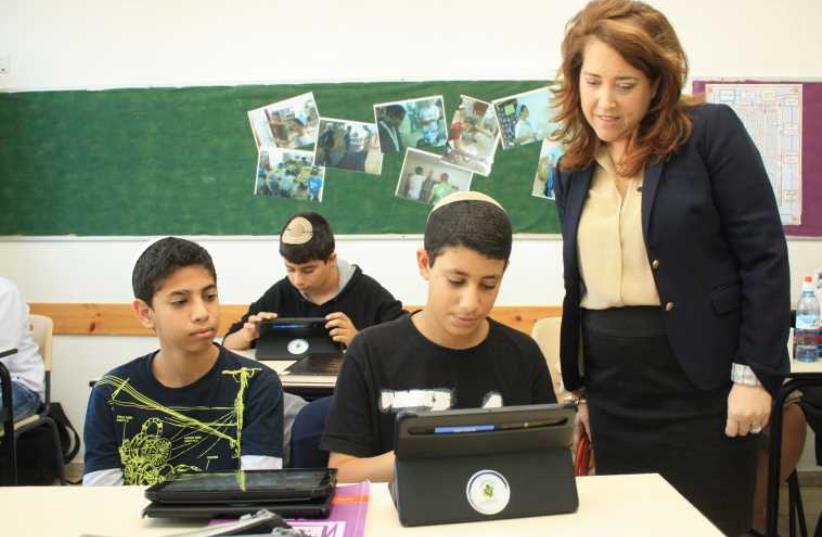 AMIT students
(photo credit: ROBERT E. SUTTON)
Advertisement
The AMIT school system, consisting of 110 schools teaching 30,000 students across the country, celebrates 90 years of educational activities on Tuesday. Celebrations include a visit to the President's residence Tuesday morning and a birthday party at the Jerusalem International Convention Center with guest of honor, newly-sworn-in Education Minister Naftali Bennett, and interactive booths run by students of the AMIT schools on Tuesday afternoon.Debbie Isaac, AMIT President, is in Israel for the celebrations and she sat down with The Jerusalem Post to discuss the unique school system.The concept of the schools, Isaac said, is to create educational and vocational opportunities for Israeli students from all backgrounds, across the country. More specifically, "we want every student, wherever they're coming from and whatever their needs are, to have the best opportunities to reach their fullest potential and no tool they need should be out of their reach," said Isaac.One of the focuses of the school is leading the education industry in innovation in the classroom.  "Education is evolving," states Isaac, and AMIT schools stay ahead of the curve by "changing very drastically and very dramatically how we educate in our schools."Isaac talks about technology that rests in the pockets of every student, even those from the lowest socio-economic strata in Israel. "Information is available readily to everyone. The question today is what do you do with that information? How do you use it effectively," she asks.Today, teachers are no longer imparters of information, they are facilitators, Isaac explains. The AMIT schools have started using "flipped classrooms," a teaching method that has students learn basic concepts on their own at their homes and then come into the classroom "to utilize those basic concepts." This, she explains, is the opposite of how education systems used to work, by teaching basic concepts at school and expecting students to learn how to apply it on their own.She lists interdisciplinary learning, experiential learning, and game theory learning as some of the educational techniques used to allow students to utilize information they have learned at home and take that learning to a new level in the classroom setting.An example Isaac gave of utilizing technology in the classroom is an English class that opted to blog and tweet in English rather than utilize traditional methods of learning English.The feedback from students has been very positive, Isaac relates. They are "much happier in class, they enjoy attending school more." She also says that parents, who sometimes worry when they initially hear of the new teaching techniques, have been very happy with the school's educational approach.While the network of schools boasts an over 80 percent overall matriculation pass rate among their students, the schools don't all focus on the traditional subjects.Some of the AMIT schools emphasize vocational training, such as automotive care, catering, and even hair styling. Isaac explains that these schools build students' self-esteem by allowing them to succeed in less traditional subjects and this self-esteem spills over into their traditional subjects as well.One of the schools has a track for scouting and many of the graduates become sought after trackers in the army. "It gives them a real sense of success," says Isaac.Another aspect of pride for the school system is their immigration integration policy. Isaac says that each new wave of immigration to Israel brings new challenges and the school rises to meet them all. She speaks of the current wave of immigrants from France and says that the AMIT schools are taking in one or two new students each week and integrating them into the system.In light of the recent demonstrations in the Ethiopian-Israeli communities, Isaac spoke about the high number of Ethiopian-Israelis in the AMIT school system, most of whom matriculate. Many schools had very low quotas for Ethiopian immigrants when they came to Israel, as low as 10%. The AMIT school system was happy to take in immigrants.Due to AMIT's success at teaching different segments of society and their "excellent track record educating in the Ethiopian population and educating in a way that did not segregate Ethiopian communities out of the rest of the population," Isaac says that they were approached by the government to take over schools in Netanya.In addition to immigrants, Isaac also spoke of the integration of the ultra-orthodox community into their school system. She says they were approached, along with some 20 additional educational organizations, to design a program for the ultra-orthodox sector. From those, she says, AMIT is the only one still operating two facilities.Isaac says their success lies in the holistic approach they took, not just devising an educational plan, but approaching the psychological issues involved, keeping parents and community Rabbis involved in the process, and never forcing the students to change their religious beliefs."The issue of integrating the haredi community into the economic life of the country is very important," said Isaac, explaining the importance of secular subjects being part of the curriculum.Finally, Isaac emphasized the importance of women's empowerment in a school system that was founded by a woman who broke away from the male-led Mizrahi organization. Bessie Gotsfeld decided that if she was raising money, there was no reason she shouldn't decide where the money went, so she started Mizrahi Women, which later changed its name to AMIT.

Tags teaching in israel
Advertisement
Subscribe for our daily newsletter