Prime Minister Netanyahu and Defense Minister Liberman announced on Tuesday their agreement to allow the construction of an additional 3,000 housing units in the West Bank. 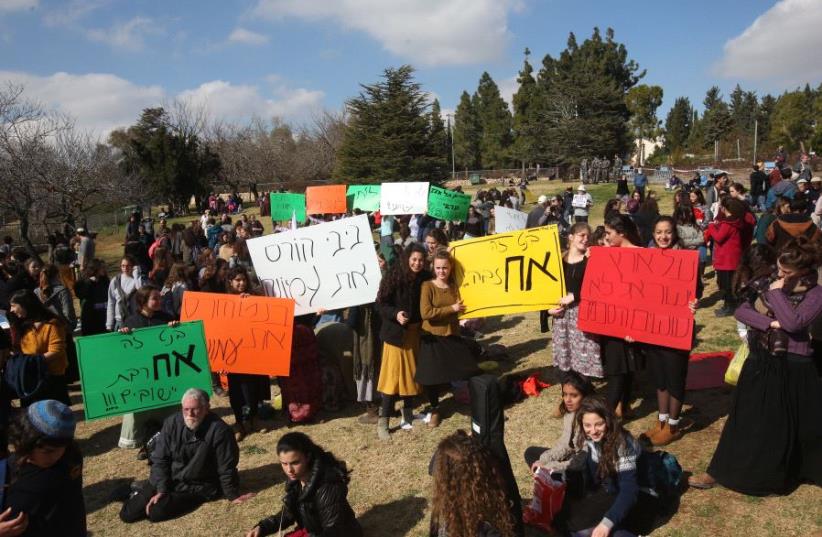 Rally outside the Knesset in support of the so-called settlements bill ‏
(photo credit: MARC ISRAEL SELLEM)
Advertisement
Israel on Tuesday night announced the advancement and or authorization of 3,000 new homes in West Bank settlements.News of the new construction was issued by Prime Minister Benjamin Netanyahu and Defense Minister Avigdor Liberman within minutes of the announcement that the Amona outpost would be evacuated early Wednesday morning.Some “2,000 units are ready for immediate marketing and the remaining are in different stages in which [plans] will be deposited and or validated,” the Defense Ministry notice said. “We’re in a new era where life in Judea and Samaria is returning to its normal course,” Defense Minister Avigdor Liberman said.The announcement follows last week’s declaration of the advancement and authorization of 2,500 units in West Bank settlements.The back-to-back announcement of 5,500 new settler units within a single week is almost unprecedented.
Israeli legislators advance revised bill to legalise settlements
Similarly it is unusual for the government to openly declare such activity given that the bulk of the international community believes that Jewish building over the pre-1967 is a stumbling bloc to a creation of a two-state solution with the Palestinians.Israeli believes that settlement construction has no bearing on the peace process and that it can continue to build, but it is often quiet about settlement activity.Typically these type of announcements are done either by the Israeli non-governmental group Peace Now, which opposes settlement activity, or by the media.According to partial list of the 3,000 units provided by the Defense Ministry, the authorizations are as follows: 700 unites in Alfei Menashe, 600 in Beitar Illit, 650 in Beit Aryeh, 200 in Oranit, 50 in Nofim, 150 in Givat Ze’ev, 70 in Shavei Shomron, 100 in Karnei Shomron, 100 in Shiloh, 100 in Metzodat Yehudah and 80 in Kfar Eldad. Most of the units are close to the pre-1967 lines and within the settlement blocs. Unlike the last notice, this one did not refer to the location of the settlements.Settlers are concerned that Netanyahu plans to move forward on a plan according to which he will build within the blocs and freeze the isolated ones. The settler leadership believes Netanyahu will present such a plan to President Donald Trump when he meets with him in Washington on February 15, a meeting that was announced by the White House on Monday.