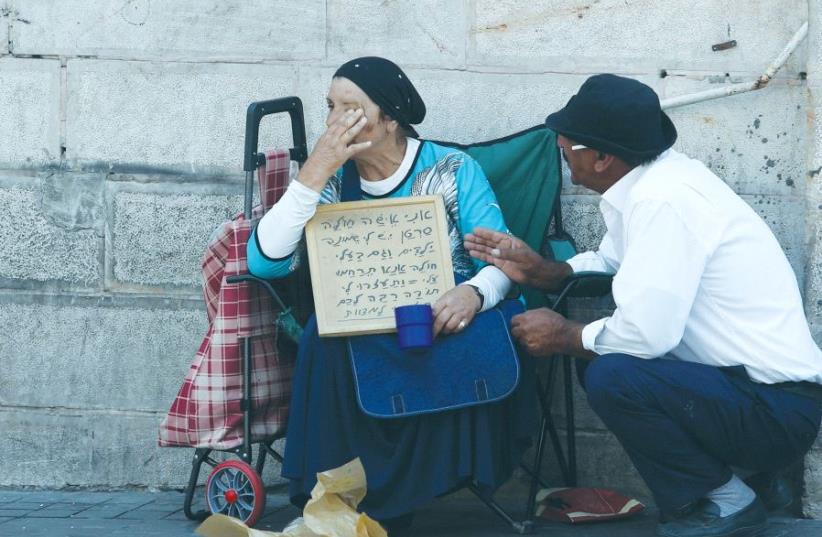 A PASSERBY stops to console a poor woman in Jerusalem in 2015.
(photo credit: MARC ISRAEL SELLEM)
Advertisement
Israel’s long-term economic growth is not sustainable and the country has the highest poverty rates among its OECD counterparts, according to a report the Taub Center for Social Policy Studies in Israel released on Sunday.The study, “A Picture of the Nation 2017,” was conducted by the center’s executive director, Prof. Avi Weiss, and provides an overview of Israel’s socioeconomic situation.The past year has seen an increase in employment, a decline in unemployment and a large rise in the country’s GDP. But this positive trend is not expected to continue, the report stated.In 2016 there was a 4% increase in GDP, which the researchers attributed to a single investment – by the Intel Corp. in Kiryat Gat, as well as a rise in car imports.Despite this spike, the report found that the past two decades have seen a major shift in the causes of growth – originally stemming from a combination of investments in physical capital and an increase in human capital to growth based on increased employment.However, the report stated that the proportion of the working-age population is shrinking while simultaneously growth in human capital has considerably declined as there are more poorly educated workers entering the labor market.Furthermore, Israel is ranked 52 in terms of ease of doing business – below most OECD countries, according to a 2016 World Bank report – another obstacle to economic growth.The report noted that despite being the “Start-Up Nation,” an international survey of digital competency shows that only 27% of adults in Israel are ranked in the highest competency levels, versus 31% on average in the other OECD countries.With regards to social expenditure, the report found some positive trends including an increase in expenditure on education, welfare and health.Despite this, poverty levels and inequality are among the highest in the developed world.The report attributed this to a “lack of success of government policy in reducing poverty through taxes and the welfare system” as well as due to Israel’s low tax burden and large populations – primarily the Arab and ultra-Orthodox sectors – characterized by low human capital, low labor participation rates and large families.As such, the findings indicated that in 2015 social expenditure (including education, health and welfare) was NIS 192 billion – the highest since the beginning of the century – while total expenditure on social welfare was NIS 94b., or 21% of total government expenditure.Still with regard to combating poverty, the report indicated that in 2017, additional funds are expected in the “war against poverty” to bring its budget up to NIS 4b. – though this figure is only about half of the amount recommended by the Alalouf Committee, which was tasked with presenting recommendations to reduce poverty.With regards to health, the report found that Israelis are living longer and are in better health compared to their European counterparts. Israel is ranked ninth in the world in terms of life expectancy, about 82 years, and 10th place in terms of healthy life expectancy, about 71.7 years.Despite this, the report found that Israelis are spending much more on healthcare – the rate of Israelis purchasing supplementary insurance offered by health funds jumped from 50% to 80% between 1999 and 2012, and some 40% of the population also purchases private insurance.Furthermore, there are substantial inequalities in the healthcare system – the working poor cannot afford to buy healthy food and additionally they spend a larger percentage of their income on healthcare.And those living in the periphery have longer waiting times for medical procedures.With regard to education, the report painted a largely positive picture: teachers’ salaries have risen, more teachers have academic credentials, and class sizes have fallen.The report noted, however, that there have been substantial demographic changes within the education system over the past few years, primarily with regard to Arab Israelis and ultra-Orthodox pupils.In the past few years the share of Arab in the education system has declined, though the portion of pupils from weaker backgrounds has also dramatically declined.Similarly, the rate of growth of the ultra-Orthodox stream has also slowed, though in contrast, the portion of pupils from weaker backgrounds has increased.In a special section devoted to ultra-Orthodox in the higher education system, the report found a substantial growth in the number of haredim studying in institutions of higher education.Despite this positive trend, the share of those holding a bachelor’s degree is still very low. In 2014, 3,227 haredim began studying for a degree and the share of haredi students reached approximately 8% among men and 15% among women. However, only about 2.4% of haredi men and 8.3% of haredi women ages 25-35 actually hold an academic degree.“Without a significant improvement in haredi formal educational achievements, the ultra-Orthodox population is likely to face monumental difficulties in improving their economic circumstances and reducing the high levels of poverty within their communities,” the report stated.